Judges Guild has released the original Guide to the City State of the Invincible Overlord in PDF on DriveThruRPG and RPGNow! 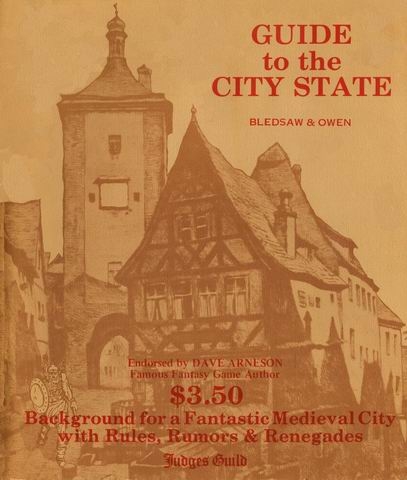 This is the ORIGINAL 56-page booklet that started it all. And not only that, it is apparently a scan of Bob Bledsaw's PERSONAL copy! At only $3.50, it's a steal!

Click here to check out the release on DriveThruRPG!

Here's what the entry says:

From our glorious first year, 1976, this is the original Guide to the . All 54 pages have here been scanned from Bob Bledsaw's own in-house copy (some cleaning of minor coffee-stains was required) but she is good as gold! Out of print for over 30 years, this was the foundation of what later became a benchmark of fantasy role-playing, and our best-seller, of the Invincible Overlord! Enjoy this piece of gaming history, with artwork by Bob Bledsaw (the Makistikator himself).
Posted by James Mishler at 4:16 PM