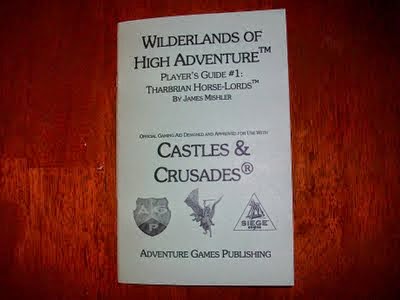 This time I want to talk about one of the unsung heroes of the AGP library, Wilderlands of High Adventure Player’s Guide #1: Tharbrian Horse-Lords. It was supposed to be the first in a series of player’s guide that covered the various cultural groups of the Wilderlands, providing all the information on a specific culture needed to fully immerse a character or adventure in the world of that culture. It included not only the “flavor text” information, but also useful crunchy bits, Castles & Crusades style, for players who liked that kind of thing.

It was one of my favorite books to write… sadly, for sales, not so good. Here’s the sales blurb:


The first installment, Wilderlands of High Adventure Player's Guide #1: Tharbrian Horse-Lords details the culture and society of the northern horsemen of the Wilderlands. Tharbrians are renown throughout Viridistan, the Roglaras, and beyond as atavistic and savage horse nomads. They roam the north-western plains of the Wilderlands with impunity, recognizing no lord or master. They have brought down empires and extirpated whole civilizations. Herein you shall discover the secrets and truths about Tharbrian history and society, and details on their abilities and culture.
This 36-page book includes complete details on: History, Environment/Range, Appearance, Personality, Ethnic/Racial Affinities, Culture, Laws and Traditions, Religion, Social Structure, Organization, Gender and Family Relations, Animals, Diet, Technology, Clothing, Armor, Weapons, Combat, Treasure, Language, Names, Racial Traits and Abilities, and Glossary

And here’s the entry on the AGP Catablog.

Sadly, it didn't go over nearly as well as I’d hoped. I thought it was one of my better products; I certainly enjoyed writing it, but then, socio-cultural anthropology was always my thing. Really, I am a card-carrying anthropologist (card-carrying as in I have a degree in it and was a member of the anthropology honors society, etc.) But apparently, not everyone is as concerned with being immersed with the culture of their character as I am.

The choice of the Tharbrians as the first culture featured in the player’s guides was an easy one. After all, the Tharbrians can be found just about anywhere in the Wilderlands. Though they are native (that is, dominant) on the Plains of Lethe and the steppes west of that land, they wander far and wide across the whole of the region. So they could be found just about anywhere, making for an excellent “home base” for characters and a lovely foil for the Judge to use against the players when needed.

The Tharbrians featured prominently in the histories of the Wilderlands, long before I got my hands on them. They were the primary motivating force in Viridistan and the area around the City State; though rarely mentioned in the base products, their history was described in detail by Bryan Hinnen in the “Hanging Out in the City State” series of articles in Pegasus10-12. From that basic outline I added in details over the years. First, of course, they ended up being kinda-sorta Gaelic, as in my Wilderlands the common folk of the Roglaras, the Tharbriana, were kinda-sorta Celtic, as were the Altanians from which both races primarily descended (the Altanians, IMW, being a mix of the original Red Men of Mars as envisioned by Bob and the Cimmerians of Robert E. Howard).

To that Gallic-Nomadic base I added on historical and legendary elements from the Sarmatians, Tocharians, Goths, Huns, Alans, Turks, and Mongols as seemed to fit. For their pantheon I put together a mix of various Celtic gods, demigods, and heroes who naturally gravitated toward the nomadic tradition. And then I dropped in a big dollop of the Horseclans; I shook and stirred the cauldron and out popped the Tharbrians. Though of course it took time; the Tharbrians had been brewing for decades, through various campaigns and iterations. I dropped out all elements of the “Neo-Gothic Hun” (complete with spear-pointed pot helm and outrageous German accent) that had crept in there over the years from some point (“Fritz! They killed Fritz!”). 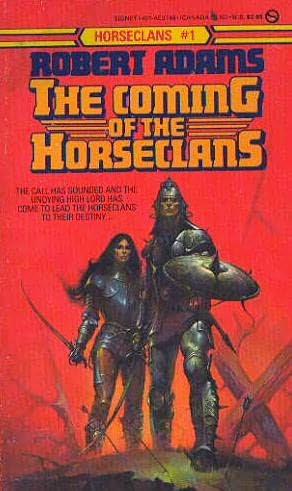 What are the Horseclans, you ask? Well, the Horseclans are a culture in a post-apocalyptic series of novels by Robert Adams, the totality of which dramatically influenced my concept of fantasy and science-fictional worlds and cultures. In the Wilderlands it is what gave rise, over time, to the pseudo-Greek Viridian Empire and the very Horseclans-like Tharbrians. If you are at all into post-apocalypse science-fantasy fiction, and have a strong stomach for very violent, very un-politically correct fiction, you should definitely check the series out, if you can find it ( died years ago, and the books have languished since). The first 12 of the 18 books are quite good; after that point Adams diverges into Heinlein Syndrome and often goes way off course with lots of gratuitous sex and radical libertarian political screeds. Heck, it was even popular enough to license as a GURPS supplement once upon a time (GURPS Horseclans, which is excellent and absolutely required reading if you are a Horseclans fan). 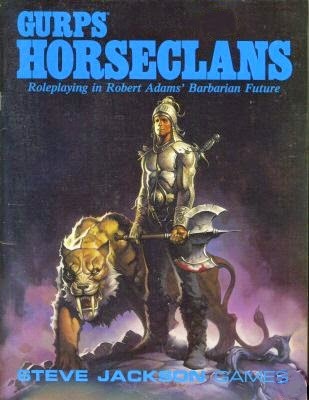 I think perhaps in the case of this book, that the Horseclans influence, combined with the overly anthropological emphasis (it does read in places almost like an anthropological study or thesis), might have been a bit much. After all, there are five pages alone on laws and trials; and a page and a half dedicated simply to gender relations? Plus most of the Tharbrian terms introduced in the book, and the Tharbrian names, are Celtic names, often difficult enough to read, and then fractured Horseclans-style, and thus practically unreadable to any but a Horseclans fan. Not to mention the debased pseudo-Greek of the Viridians mentioned here and there.

Yeah… maybe a bit much. Obsessive, perhaps. But I enjoyed the hell out of writing it. And at least I resisted the temptation to go all in and include the intelligent saber-toothed cats I had in my Wilderlands as the allies of the Tharbrians…

Fortunately, though it is out of print in booklet format, it is still available through Judges Guild in PDF format: