I've already had my say on this:

OK, now for some commentary...

Email ThisBlogThis!Share to TwitterShare to FacebookShare to Pinterest
Labels: Dungeons and Dragons, Wizards of the Coast

At the beginning of the adventure the party consisted of:

The party initially met at the Tipsy Apprentice, a middle-class tavern in Berklee, to discuss the possible targets for their first endeavor. They decided to tackle the Maul of Mindor the Magnificent, a recently re-discovered ruin in the Debatable Lands of Fremon, south of the Shadow Wall that guards the Ten Towns from the things out of the Hell Pit of Sanjo. A maul is a vast underground labyrinthine structure, buried by the detritus of centuries, and occupied by many different species and races; essentially, it is an underground city, town, or village occupied by a wide variety of creatures inimical to the “goodly races.” Wizards and clerics especially are known to use these as recruiting grounds, thus many towers and temples, and the ruins thereof, stand atop these mauls.

Thus on Thursday, the 9th of June 900 AC the adventurers set out from Berklee. They took the daily coach from Berklee to Haywar, and stayed that night at the Crowing Cock Inn, a less savory locale on the south side frequented by adventurers of various stripes. There they spent un otherwise unremarkable evening in revel with others of their type in the common room.

The next morning, June 10th, the party set out to the south, again on the , this time afoot, as there was no coach service between Haywar and Castle Nihmits. Around noon they passed through the gates of that pile of stone, the lynchpin in the Shadow Wall. They took the opportunity offered by the guard to scale the tall tower and view the Debatable Lands from a high vantage point. From the top of the tall tower they could see well into Fremon, and could espy the Ardenwood Keep and the great mound of the Maul amidst the swampy forest and bracken. Further to the south, though, the land was covered by the Shadow of the Hell Pit, that coruscating inky bank of cloud and mist that obscured the land for miles around the Hell Pit, protecting many of its denizens from the pure light of the sun. 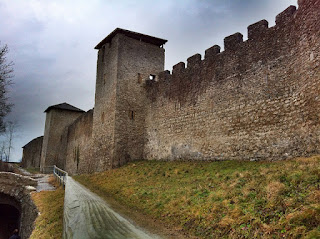 At this point the guards pointed out that, once they’d had their view of the Shadow, many others had turned back north, deciding that a long if boring life as a clerk or farmer would be better than facing the things under that Shadow. Though they all thought for long moments, none of the party members faltered in their decision to seek out gold and glory under the veil of the Shadow. As they walked down the stairs of the tall tower, they heard behind them guards grunting and chuckling, as some handed to others bits of copper and silver to satisfy bets… many especially over the fateful decision made by the twins Salantra and Salyena, whom the guards fancied were better off in a convent or mayhap some seedy saloon as serving wenches…

And so they continued south. Past Castle Nihmits, the turned more into a trail or path, though here and there they could see where there had been recent work to fix a hole or shore up the pavement stones. Still, though it were but short miles from the castle to the keep, the sun was well toward evening when they arrived at the keep… already, it seemed, the Shadow played tricks on them. They decided that discretion were the better part of valor, and secured lodgings at the only inn in the keep, the Balrog’s Head Roadhouse. 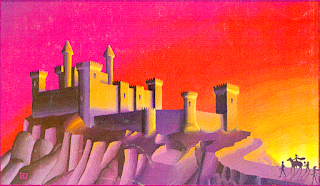 There they filled their bellies with a fine fish stew, a bit of roast joint, an orange pilaf, Haywar cheeses and sausages, and topped off their meal with the local Amber Mead, brewed from the honey made from the local eucalyptus trees.

Keela met a pair of adventurers returning from an excursion to the Maul; they had an unpleasant encounter with other adventurers, mercenaries really, who had hired on with one of the resident goblin tribes, the Dwarf Stompers, who were at war with another goblin tribe, the Orc Rippers.

Stabytha met another group of adventurers who were giving up on the Maul; they had lost a companion to a terrible many-tentacled monster that had dropped down from the ceiling and ripped off their companion’s face. They fled, and eventually had to put their friend out of his misery. They had decided that adventuring was just not worthwhile, as all they had to show from their adventure was a dead friend and many small wounds.

Thurn sat with some local folk discussing the old legends concerning Mindor’s magical weapons. For it was said that Mindor recruited a clan of dwarven rune smiths to join him at his Maul. There they built a great business in the production of magical blades, of lesser and greater sort, some of which were still held as heirlooms by noble and gentry families.

That night after even the locals had stumbled off home to sleep, the three shared what they had learned with the party; what the others had learned, if ought, was known but to them. After a good nights sleep, the party paid for a personal room three days in advance and there stored their travel bags and such items as were superfluous to the immediate expedition. They then set off to the south to tackle the Maul of Mindor the Magnificent...

Also of note, the party hired on a likely local youth, Stefan the Bastard, as their lantern-bearer. 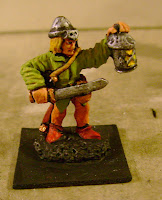 To be continued...
Posted by James Mishler at 3:57 PM No comments: