1) Where are the homelands for the Dwarves, Elves, and Gnomes? Why no Halflings?
2) Were Kzinti and Tharks considered playable races, and where were their homelands? One blogger suggests that Tom Moldvay developed the Rakasta from the Kzinti; do you recall if this is true?
3) How close were the TSR Known World’s cultures and governments to the Original Known World’s? For example, was the Original Known World’s Glantri ruled by wizards?
4) Do you recall the cultural equivalents of your human cultures? Some are fairly obvious, others a bit mysterious. Was the list derived from the army/culture list in Chainmail?
5) Are there more maps and/or information sheets you can reveal at this time?

So as you can see, the reply opens up even further questions... Did the ancient pre-human world include the predecessors of the Carnifex (my theory: the Carnifex were inspired by the Dragon Kings from Lin Carter's Thongar series). Are the Quastog of the Canolbarth half-elves or half-orcs or even further mixed? And I need to put together a list of my guesses for the cultures and their inspirations... And what about the history of the world? The heroes and villains, the events in the several campaigns that took place before Lawrence and Tom went to TSR? Was White Plume Mountain originally set in the Original Known World? So many questions...

This new version of the map takes into account the information on the other races and places them appropriately. I'm still not certain as to the wide-spread nature of the Orcs; that's another question I have for Lawrence. I've also re-calibrated the hex counts; note that the original map has a counting error in it, jumping from column 55 to 60, so rather than 100 columns of hexes there are actually only 96. [From the Vaults] Isles of Ages

So I've finally gotten around to sorting through a few boxes of old campaign materials from our storage, and have found a LOT of cool stuff, much of which I have forgotten. Here's a scan of the map I drew for my Isles of Ages campaign setting, a portion of which, Lost Dragonia, was featured in Fight On #10. The Isle of Ages is a classic "lost world" campaign setting, complete with dinosaurs, cavemen, vikings, conquistadors, amazons, Lovecraftian beings, and a few daikaiju-style gods...

Maybe someday I'll get around to doing more with this setting. 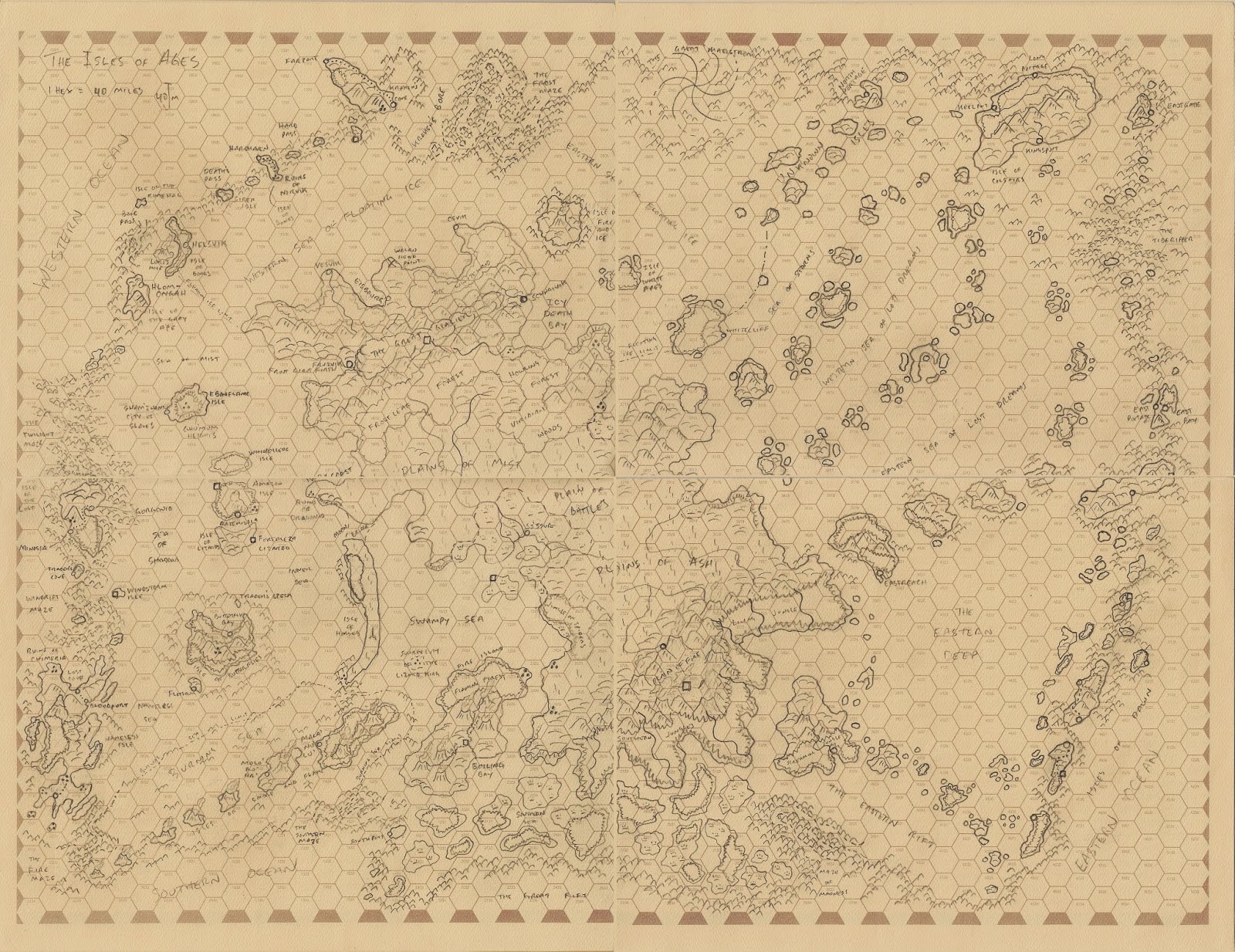 Posted by James Mishler at 10:29 PM No comments: