The Power of RuneQuest: Shaking the Pillars of Heaven 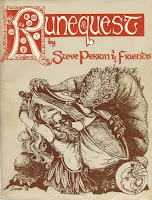 Back in the day, I dipped my toe into RuneQuest 2 a few times before I went whole hog into RuneQuest 3, the Avalon Hill Edition.
I was introduced to RuneQuest by a gaming acquaintance ca. 1982 or 1983; we played a few times, and I thought it was neat, but it did not dislodge Dungeons & Dragons from being my go-to game. Nor did the Avalon Hill edition do that, though it was close for a brief time in 1984 to 1986, and the reason RQ3 did not take over my gaming time was mostly that I could not get enough friends to play it.
I think the main reason was that it was very lethal for the kind of gameplay that we were all used to, being the hack and slash dungeon delvers that we were. Of course, everyone loaded up on weapon-enhancing spells and disruption and eschewed wasting magic points on healing. And so, everyone would die quickly, even moreso than in our D&D games. Thus, we would return to D&D… 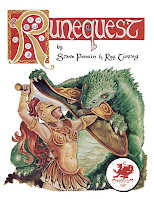 These days I’m getting into replacing my old game collection that has been lost, bit by bit, over the years. Some items I’m just going to have to get in PDF, as the collector’s prices on many of them are just ridiculous. One game that I never really collected, however, was RuneQuest 2nd Edition. A situation I’ve chosen to rectify, so I can do some deep dives into the origin of the game. And as far as official Chaosium publications, I have more or less finished that collection in PDF format.
And what a fascinating lot the corpus of the official publications makes. RuneQuest 2nd Edition, the game that challenged the primacy of D&D in many places at the time, the game that further inspired new levels of “realism” in game play across the nation, consisted, in its entirety, of:
22 products, plus 14 issues of Wyrms Footnotes. 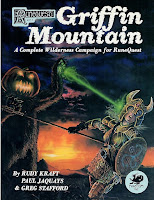 Twenty-two official products were published between 1978 and 1983. That’s it.
By that time TSR had released more than 40 adventure modules alone, not including the various editions of Dungeons & Dragons and a slew of Dragon Magazine issues and a cartoon series and… and everything else.
Now, some of these are considered among the greatest adventures ever written – Griffin Mountain and Pavis/Big Rubble especially come to mind. And too, RuneQuest was also compatible with Stormbringer, Call of Cthulhu, Questworld, Superworld, and the other various products published by Chaosium.

And then in 1984 Avalon Hill, at the time one of the largest and most influential boardgame companies in the game industry (not including the big consumer publishers), decided to break into the RPG business and felt that licensing RuneQuest was the way to go. That publishing RuneQuest would give them the leg up they needed to give TSR and Dungeons & Dragons a run for their money.
I know in the end it didn’t work for them. There were many problems with the launch. They eschewed Glorantha for a generic Fantasy Europe, which upset a lot of the existing fan base. They changed the system in ways that upset a lot of the existing fan base. They also launched three completely different RPGS at about the same time – RuneQuest, Tom Moldvay’s Lords of Creation, and Richard Snider’s Powers & Perils.
Now that was a fascinating trifecta right there. Perrin, Moldvay, and Snider. The combination of stars being in the right place to bring together so much talent all at the same time, to release three amazing games from three amazing talents at the same time, and to essentially fail with all three games at the same time… that was something.

But sadly, fail they did. But RQ3 still brought out some memorable products. Glorantha: Genertela, Crucible of the Hero Wars is still the definitive, easy-to access source for running a Glorantha campaign in Genertela. Dorastor: Land of Doom provides a proper realm of evil campaign setting in a way no one has really yet matched. And RuneQuest Cities is the ultimate edition of the classic Midkemia Press Cities sourcebook, a must-have for anyone running city-based campaigns.
Altogether, from 1984 to 1994, Avalon Hill released 29 books and boxed sets for RuneQuest (I really, really miss boxed set RPGs). They also had Heroes Magazine, a 10-issue run supporting all three RPGs plus their various board games.
From 1979 to 1994 there were, as official products, 51 booklets, books, or boxed sets, plus 24 magazines, dedicated (or partially dedicated to) RuneQuest.
I can’t even conjecture how many products TSR published in that time frame.
And yet, RuneQuest somehow managed to shake those pillars of D&D heaven.
One factor that I have not touched on yet is the fanzine factor.
RuneQuest fans apparently had a very strong fanzine tradition. Foremost among those was none other than Gregg Stafford, the creator of Glorantha. Whereas TSR sought to crush such works like they were playing corporate whack-a-mole, Chaosium apparently allowed them to flourish.
It is this aspect of RuneQuest I need to start looking into next… after delving into all the official works, of course...
Posted by James Mishler at 7:29 PM 2 comments: 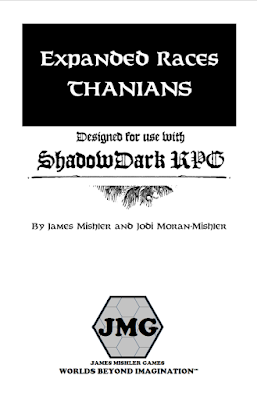