So in addition to the campaign I am running in the Wilderlands of High Adventure, I am also going to be starting a campaign set in a Sword & Soul campaign setting.
Sword & Soul is a subgenre of Sword & Sorcery, dedicated to stories/games set in Africa.
Sword & Soul originated in the works of Charles R. Saunders, the author of the Imaro series.
Ebunorun grew out of two factors: first, my great enjoyment of the Imaro stories, and second, a friend of mine who wanted to play some Dungeons & Dragons, and he wondered, as an African American, if there were any African campaign settings that did the region justice (and matched the style of play we wished to play).
After perusing a number of them, I determined that it would be best to go forward with developing my own Sword & Soul Campaign Setting, ergo, the Alternate-Africa setting of Ebunorun.
I must note that the Ki Khanga RPG is very interesting, and was strongly considered; it does not come better in the realms of Sword & Soul than a game designed by the writers who work with Charles Saunders! However, the campaign setting is still much in the works, and the system for the game is unique; with everyone wanting to play D&D, it is something to be considered for the future.
I have already posted some information on the Piazza, in the Homebrew Worlds section, though we have moved from going with Labyrinth Lord to 5th Edition Dungeons & Dragons, so the crunchy bits will change...
The map is inspired by the Alkebulan "Africa Uncolonized" map, found here.
I should note that the names of the locales were constructed using an English-Yoruba translator; in the history of Ebunorun, the Adeniya (E-Yoruba) Empire was much larger and left a much more lasting effect on these realms, such that the "Common Tongue" of the region is derived from the Adeniya tongue.
The map is below. I am working on a brief player's gazetteer that should follow, soon-ish.
We hope to begin the campaign in February.


Click here for a larger version of the map on Google Drive. 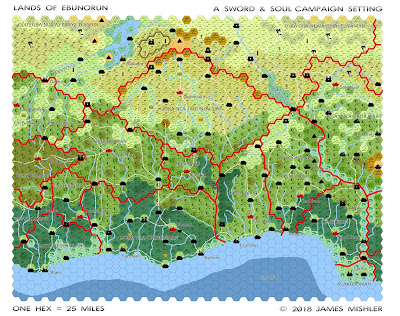 Click to embiggen
Posted by James Mishler at 5:53 PM 3 comments: