How to be the Best Dungeon Master for Dungeons & Dragons -- Part 01: Record Keeping

I’ve been the Forever DM seemingly… forever. I received the Dungeons & Dragons Moldvay Basic Set for Christmas in 1981, and as I owned the set, ended up running our group’s first game… and most games in the 40 years ever since. In that time, I’ve come up with a few methods and tricks that apply to being the best Dungeon Master, Labyrinth Lord, Castle Keeper, Referee, Judge, or what have you, that can be used by anyone to improve their game. These methods are applicable across all editions of Dungeons & Dragons and its various OSR clones/simulacrums, and most other role-playing games, as well.
A lot of Dungeon Masters have their own various core methods, but for me, the core practice – the foundation upon which all else rests – is record keeping.
I’m going to shout that out loud for those in the back – RECORD KEEPING.
This is “DM Rule Zero.” If you don’t keep accurate records of your game – whether it is a one-shot or an extended campaign – you are trying to fail. Even with eidetic memory, you need to keep records, as you as the DM are not going to be the only one who needs to reference these records.
The first element of record keeping as a DM is to record player character information for use during a game session. Yes, this takes precedent far above any adventure module or campaign records. If you can’t keep player character information straight during a session, you are going to have errors that will creep into every aspect of your game session and campaign.
The original model for this is the Advanced Dungeons & Dragons Dungeon Masters Adventure Log. This book has the basics that you need to keep track of characters during a session. For some editions and systems, of course, you might need more, though there is enough room in the various columns and rows to include pertinent information for most games. 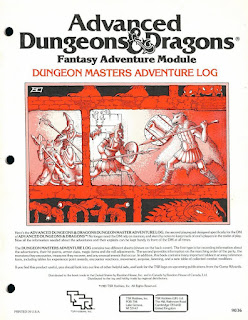 Sometimes with a one-shot or a series of murderhobo sessions I’ll just grab a notepad and write down name, race, class, level, AC, hp, and Dexterity, and maybe pertinent detection abilities/skills if I roll them secretly. But for campaign play, you are going to want to keep those records, and something more fully fleshed such as the above becomes necessary.
In addition to keeping the player character information for the session, you also want to keep a separate list of the monsters defeated and treasures won, as in my experience the party’s “treasure keeper” often goes… astray (let us be kind, and simply say, “astray”). This is to double-check against the player’s record and for ease of calculating experience points at the end of a session (or more dangerously, after several sessions when the player characters return to home base, if you wait till then to give out XP and divide treasure). 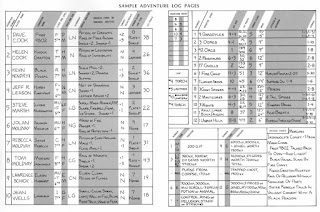 As you can see on the sheets, there is also space for marching order, listings for who carries light sources, and unusual events. All important information during a session, and at times, after a session, when continuing on with the session as part of a campaign.
Unfortunately, Wizards of the Coast has not released the Dungeon Masters Adventure Log in PDF format. I have created my own version of the logs for use with Labyrinth Lord, but they are useable with any edition of Dungeons & Dragons and the various other clones: Advanced Labyrinth Lord Adventure Record Sheets.
In addition to the player character records, you need to keep overall records of the session. Depending on the depth of the session this might be a few lines to a few pages of information. These further notes on locations visited, non-player characters encountered, overall events, and information learned will be vital for campaign play down the road – you can never count on your players remembering this information for you, so if you keep good notes, your players will think you are some sort of genius!
Evil genius, to be sure, but still a genius…
And if you are running a multi-session adventure module, this will be essential for each subsequent session, to pick up and run from where you left off. This information should be kept in chronological order, later to be dispensed out to the various locations where the permanent campaign record is kept (see below). A simple notepad works for this kind of record keeping, or, if you have a good tablet or laptop and you are a quick and efficient typist, whatever notepad or word processing system you have available.
I should note here that this record keeping, especially when using a tablet or laptop, should never, ever get in the way of the flow of the game. I find that using electronic devices, especially on the part of the Dungeon Master, can be very distracting and take players “out of the game.” Never interrupt the suspension of disbelief in the game to tap away at notes! Make a few notes on a piece of paper, then wait until you are at stopping point to take five and write your notes while everyone else is hitting the restroom or the refrigerator.
Keeping good session records is vital in order for all other record-keeping to work together when running a campaign. Here’s where things get down to the nitty-gritty with each Dungeon Master and their campaign style.
I myself generally run a Hexcrawl Sandbox-style campaign. This means I already have a lot of information at hand about the small and large aspects of the campaign setting. I have records of what is in each (or most) hexes; a procedural system for generating new encounters and locales in un-marked hexes; and notes on the overall campaign world politics, economics, cultures, history, etc.
I find that running a campaign in this fashion takes a lot of the burden off my shoulders for maintaining the campaign setting at large. While it takes a fair bit of work for set-up, the pay-off is in how easy it makes the actual day-to-day running of the campaign.
But, of course, it also requires keeping of extensive notes. I’ve kept by campaign notes and marked the changes in the situation on the ground in many different ways over the years. Back when I first made my notes, they were either handwritten on legal pads (never, EVER pull those pages out) or typewritten, 3-hole punched, and placed in a binder. In either case, I always left plenty of room beneath each entry for changes, ranging from the destruction of a lair of gnolls to the building of a new keep (or even the destruction of a village or an orphanage, of course, for Murderhobos on Campaign).
Once computers became available, I was able to simply keep my record in WordStar, or WordPerfect, or Word, and change them with a new iteration as events developed. I still try to keep no more than two to four hexes on a discrete page, for ease of printing and bringing with to the game session (I am a bit of a Luddite, so have only recently adapted to the idea of bringing along a tablet with my files).
For keeping notes on the campaign setting, I use three basic methods: the Gazetteer, the Glossography, and the Cyclopedia.
The Gazetteer lists entries, in Hex Number order, of every settlement, stronghold, ruin, lair, or singular geographical feature denoted on the map in a hex.
The Glossography is an alphabetical listing of everything else too large to fit in a single hex; usually this includes larger geographical features (river, mountain and hill ranges, forests, etc.) and large-scale political entities that control multi-hex sites.
The Cyclopedia is for game system information – new races, classes, spells, monsters, treasures, encounter procedural system, and any other non-locale/non-geographical information pertaining to the campaign.
I usually have all three together in a single file, a Campaign Codex of sorts. I keep these in Word, change them at need, and of late, rather than printing them out, simply make a PDF and load that onto a tablet for each session.
The main facet of campaign record keeping that then crops up is a Change List, which should be kept for each entry that is changed, listing what has changed and why. This is where those session notes, above and beyond the player character records, come into play.
So, if you have a Hex entry as such:

Hex 1342: Abandoned Dwarf Mine, formerly home to the Bonebreaker Gnoll Clan.
April 5, 4322: The Brotherhood of the Burning Torch raided the then-resident Bonebreaker Gnoll Clan, slew 1 Gnoll Chief (his magic +1 battle axe went to Bombur the Mighty) and 12 Gnoll Men. 6 Gnoll Women were slain, 8 Gnoll Women and 17 Young were put into the care of the Temple of Law in Grandtown for conversion. Party recovered treasure in sacks totaling 452 sp and 5 gems (10 gp each). Thurn the Thrifty (N male Human Thief 3) perished in the battle and was buried in the depths of the mine with his equipment plus 1,320 cp found with the treasure of the gnolls.

The One True Way to Play Dungeons & Dragons

Players new and old are having some difficulties these days deciding how to get their Dungeons & Dragons game on. It is all about Old School versus New School. Edition Wars. The OSR is fractured. Hither and Yon we hear of “Gaming Cults” and “Cults of Personality” gathering.
Which rules would Arneson want us to play? Which rules would Gygax want us to play?

What about Holmes or Moldvay or Mentzer or Cook or… whoever have you.

Where, oh where, can I find the One True Rules so I can play Dungeons & Dragons the Right Way?

This is simple, people.

There are no rules, only rulings.

No more, no less. Anyone who tries to tell you different is either trying to sell you something or stroking their ego.

If you play Dungeons & Dragons* and have fun – you win!

* Or any other role-playing game, whether with one page or a thousand pages of rules. 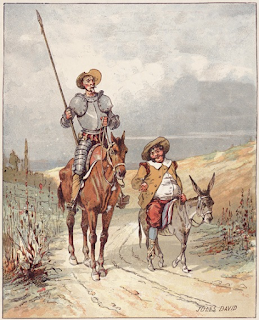 [Now Available] The Tavern from Hell Module for Labyrinth Lord 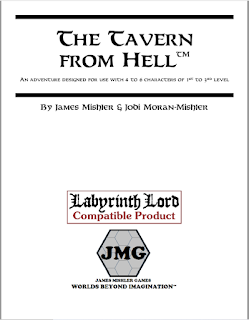 A local tavern, known as a hive of scum and villainy, has fallen under the powerful curse of an angry wizard. The locals and the heirs of the taverner are offering an exorbitant sum for adventurers to go in and perform the needful actions to lift the curse.
It is a LOT of money. And the adventurers get to keep all the treasure they find in the tavern. And the local authorities have even suspended their usual taxes on treasure.
Too good to be true?
As a down-on-your-luck adventurer, you are probably too poor to care…
Designed for use with Labyrinth Lord, easily adaptable to any Old School RPG system.
16 pages, 12 pages of ADVENTURE! $3.00 CHEAP!
Buy it now on DriveThruRPG
Posted by James Mishler at 8:27 AM No comments:

Centaur Race
Designed for Labyrinth Lord
By James Mishler and Jodi Moran-Mishler
12 pages (6 pages of material), $1 – CHEAP!
Buy it now from DriveThruRPG!
Posted by James Mishler at 2:41 PM No comments: