So last year I tried to jump into the 5E market on the Dungeon Masters Guild, with some hex-based mapping of the Forgotten Realms called Realmscrawl (also, alternate version of FR based on some old campaign stuff). Sales went nowhere, for various reasons.
I had already done a lot of work on the rest of the Realmscrawl maps, and have decided to release the Incompleat Realmscrawl maps into the wild. The linked product includes all eight of the remaining Realmscrawl map Hexographer files, as well as small PNGs of each region, and one very small scale "mega-map" of all nine regions of the Eastern Heartlands altogether.
As mentioned, it is incomplete... none of the maps have any names on them, most got to the placement of locations stage, and Map #9 is only in primitive layout stage. But if you are into FR, or just need a blank sandbox or eight, this is for you, and at the right price... if you have Hexographer, of course...
The Incompleat Realmscrawl 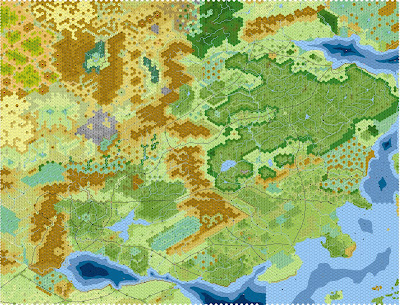 Herein you will find the remaining eight maps of the Realmscrawl line, which never quite took off.

The initial release, Realmscrawl Campaign Map #5: Tilverton, never sold enough for me to further develop the line.
However, I still have my initial work done on the rest of the maps; here they are, incomplete, ready to be further developed for your own campaign using Hexographer.
Included are the Hexographer files for Maps 1 to 4 and 6 to 9.
Maps 1 to 4 and 6 to 8 are essentially complete, save for names. Map 9 is in a rather more primitive condition, but the general outline is all there.
Also included are small maps of each of the eight regions, in PNG format, as well as one map of all nine regions stitched together in a primitive fashion (made with slightly older versions of the maps included herein).
PAY WHAT YOU WANT
Click Here to get the Incompleat Realmscrawl at DMG
Posted by James Mishler at 11:24 PM 1 comment: