ADVENTURER
The adventurer class is an alternative to most other human classes (it is suggested that only the fighter and thief be used otherwise, and if using other races, use only racial classes for those races). It enables players to play a character that can do a little bit of everything. This class is inspired by the adventuring, sneaky, sword-wielding dilettante rogue spell casters of Smith’s Hyperborea and Vance’s Dying Earth. Examples include Turjan of Miir, Cugel the Clever, and Rhialto the Marvellous.

Hit Dice: Adventurers use eight-sided dice (d8) to determine hit points. Adventurers gain one hit die per level up to and including 9th level. Two hit points are gained per level after 9th, with Constitution modifiers no longer applicable

Armor: Any, however, armor use can cause issues when using magic spells or thieving abilities.

Adventuring Abilities: An adventurer begins play at 1st level with the following abilities:
Saving Throws: An adventurer begins at 1st level with a base saving throw of 16 in all five categories. At 1st level he divides 10 points among the five to lower the scores; he may spend no more than 5 points on any one saving throw in this fashion. Every level thereafter the adventurer lowers two saving throw scores by 1 point each. Once a saving throw reaches 7, it can only be improved 1 point by applying both points for that level to that saving throw. No saving throw may be improved to better than 3. Example: Artano the Erudite begins play at 1st level by hedging his bets and divides the 10 points equally by placing 2 points in each saving throw, for saving throw scores of 14 across the board. At 2nd level he decides to put 1 point in Breath Attacks and 1 point in Wands, lowering those scores to 13. At 3rd level he lowers his saves in Poison or Death and Petrify or Paralyze. Then at 4th he lowers Spells or Spell-like Devices and Wands again.

Spell Casting: An adventurer can cast spells. Spells are cast at a level equal to the adventurer’s level.

If an adventurer has a low Intelligence score, he has a base chance of spell failure with each spell based on the “Spell Failure” chance listed under Wisdom modifiers.

If the adventurer casts a spell while wearing armor, there is a chance of spell failure. The chance is equal to any base spell failure chance plus 10% per point of defense the armor provides (not including magical bonuses) plus 5% per level of the spell, less 5% per adventurer level, less 5% per point of Intelligence bonus. If the failed roll is in the lower 10% of the chance to fail (rounded up), Something Bad happens.

Example: Ffaunce the Fair (6th level Adventurer, Intelligence 17, wearing chain mail [AC 5, 4 points of armor]) tries to cast Melf's Third Invocation of the Incandescent Orb (fireball) at a pack of voormis. His chance of failure is 40% (armor) +15% (3rd level spell) -30% (adventurer level) -10% (Intelligence) = 15% chance of failure, with a 2% chance of Something Bad happening.

Spells named as rituals require both hands be free, and additionally the caster suffers double the normal spell failure chance if he is wearing armor. Spells named as spells and formulae require that both hands be free to cast the spell. Spells named as cantrips and charms require at least one hand free; the other may hold a weapon, shield, or other item. Spells named as eyebites and invocations do not require any somatic components, do not require a free hand, and, if the caster makes a saving throw versus Spells, can successfully be cast out of initiative order (though counts as that round’s act). Note that Arturzax’s Invocation of the Roundabout Plummet is of such efficacy that it can always be cast instantly without need to make a saving throw.

The adventurer begins play at 1st level with four spell books, each containing one spell: Murgen’s Primary Arcane Filter Spell (read magic) in one and random spells in the other three. To determine the spells known, roll a d6 and a d20 on the 1st level spell table. On the d6, on a 1 or 2 add nothing to the d20, on a 3 or 4 add 20, and on a 5 or 6 add 40. If you re-roll a spell it means you were stiffed by your master and were taught one less spell.

Note that spell books are quite large and very bulky. Each book contains only one spell, and thus spell books are virtually impossible to carry with on an adventure unless the adventurer carts them in a wagon or carries them in a bag of holding or similar magical item.

While Murgen’s Primary is not needed to determine an unknown spell contained within a spell book, its use is required in order to read and attempt to learn the new spell (the spell is required to interpret the arcane ciphers, runes, sigils, and diagrams included in the spell). The adventurer must spend the usual time and gold to learn the spell, roll a Learn Spell check based on his Intelligence score, and if he learns it, he can thereafter memorize it. He can only learn spells by acquiring other spell books or by researching and recreating a spell (i.e., the bonus spell gained by choice at each level).

Scrolls and scroll-like devices cannot be used to learn spells.

If an adventurer fails to learn a spell, he may attempt to learn that spell from another spell book after he has gained a level. Note that the Intelligence-based minimum and maximum spells known is not applicable to adventurers.

The adventurer must memorize spells in order to cast them, just as in the normal rules. The adventurer can memorize a total number of spell levels at any one time equal to his level plus his Intelligence bonus. He cannot memorize the same spell twice. He must have the spell book of the spell to be memorized present in order to memorize the spell. Spell memorization is automatic and requires merely one minute per spell level if the adventurer had at least eight hours of sleep since the last time he memorized spells (singly or as a group of spells memorized immediately after sleep). Otherwise, memorization requires 10 minutes per spell level and the chance to successfully memorize a spell is equal to the adventurer’s chance to learn a spell less 5% per spell level; if the failed roll is in the upper 10% of the chance to fail, Something Bad happens.

As each spell of a type is always the exact same regardless of who owns the spell book containing the spell, an adventurer can memorize a spell he knows from spell books other than his own. Thus, if Artano the Erudite already knows Melf’s Magic Missile Charm he can memorize it normally from another adventurer’s spell book without additional chance of failure.

An adventurer can attempt to cast a known but not memorized spell directly from a spell book. This requires one full round per level of the spell. The chance to successfully cast the spell is equal to the adventurer’s chance to learn a spell, plus 5% per level, less 10% per spell level; if the failed roll is in the upper 10% of the chance to fail, Something Bad happens.

An adventurer can also attempt to cast any spell from a spell book, even one he does not know, providing he is able to apply Murgen’s Primary to read it. The chance to successfully cast the spell is merely 5% per level, less 5% per spell level; if the failed roll is in the upper 10% of the chance to fail, Something Bad happens. And yes, negative percentages increase the critical failure chance accordingly! Note that the Judge should not inform the adventurer the level of the spell before he attempts to cast it!

Adventurers can make one-shot magic items that function as scrolls, though anyone is able to use these items. One-shot items cost 100 gp and one week time per level of the spell, and can usually be sold for two to five times the cost (if a buyer can be found). When the item is used, the wielder checks against a chance equal to the maker’s chance to learn a spell; if the roll fails, the item fails, and if the failed roll is in the upper 10% of the chance to fail, Something Bad happens.

An adventurer may wear armor while attempting thieving abilities, but suffers the usual penalties for doing so.

Adventure Path: An adventurer chooses his own path for advancement in his fighting, thieving, and magic skills, though at times his previous adventures may choose his path for him. Every level gained the adventurer may choose one of the following: 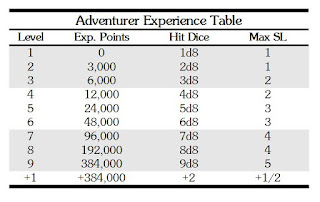