Goblinoid Games has started a Kickstarter for a new supplement for Cryptworld: Burial Plots, a collection of five adventures written by Tim Snider of The Savage AfterWorld! Several levels to pledge enable you to not only pick up Burial Plots, but also pick up one or more of the Pacesetter games and/or supplements: Cryptworld,  Majus, Rotworld, Timemaster, or Monsters Macabre (NB, I contributed to Monsters Macabre, but I am not financially involved in any way with this Kickstarter or the Pacesetter games). 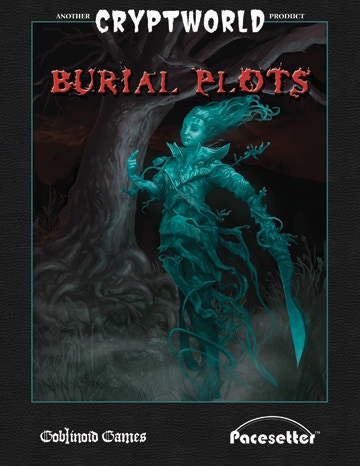 COVER ART: Jethro Lentle
INTERIOR ART: Brian Thomas
BURIAL PLOTS includes five adventures for the CRYPTWORLD Horror Role-Playing game. They are also for use with the original Pacesetter edition of the horror role-playing game CHILL.*
The adventures are:
Condition Critical
Dr. Howard Eastman has called a press conference at his remote research facility to announce a medical breakthrough that will “eradicate human illness and suffering forever.” But what if the cure proves to be worse than the disease?
Unquenchable
Three days ago, a group of hunters failed to return from their annual deer hunt near Akron, Ohio. Your team of expert trackers and investigators has been brought in to assist in the search. But there seems to be an undercurrent of unease amongst the police who whisper of a disturbing discovery they’ve made. Is there something sinister lurking in the forest?
Death in the Dust
In 1888, the silver-mining boomtown of Weaver, Arizona, was abandoned after a series of unexplained disasters, and the town was left to crumble in the desert sands. Today, the former ghost town has been revitalized as a historical attraction. Is history about to repeat itself?
Forget-Me-Not
Horrific axe murders recently committed in Oregon's Tillamook State Forest are identical to those committed by the legendary "Paul Bunyon Butcher" 40 years ago. However, the original killer – now elderly and feeble – remains behind bars. Has a copycat killer surfaced, or is this the work of something even more sinister?
It Came Upon a Midnight Clear
The Christmas season is typically a time of peace on Earth and goodwill toward men. But one THING has decided to make this year's Yuletide visit to relatives a horrific holiday from Hell.
CLICK HERE FOR THE KICKSTARTER
Posted by James Mishler at 6:06 PM No comments: