Well, that year could have gone… so much better.
Real Life went pretty well – very well, actually, especially compared to recent years; but 2018 was really not my year for gaming, neither for playing games nor writing about them.
There’s been no specific reason for the lack of either, though “time really wasn’t on my side” and “didn’t have the gumption to make it happen anyway” come to mind as twin dooms.
In the last few years I’d mostly been running Dungeons & Dragons 5E, and in general, I’ve found it lacking. It just does not maintain the pizazz for me that Labyrinth Lord and other OSR games engender, and so my desire to run it simply faded over time. And it was not enough to overcome the scheduling issues that developed this year with Jodi’s job, such that our only time together for most of the last six months generally coincided with the times the bulk of the group could play… so it goes.
As for writing, well, I’ve just not been that inspired. Usually, a lack of gaming inspires me to write about gaming, seeking an outlet for those energies. That just didn’t happen.
There was a brief period when that changed, however, and I was gearing up to start a whole new project… but then came the announcement of the end of G+, the essential home of the OSR, at the same time that the OSR started to completely implode in political foofaraw, and so rather than gamble time and treasure on an untried product even as the market was shifting, I decided to shelve the work and see how things develop.
Once burned, twice shy as they say.
But some of that renewed energy still is burning in my craw, so I want to do something with it.
With the release of the Advanced Labyrinth Lord tome [Dragon Cover | Orcus Cover], I plan to do something to build on that. 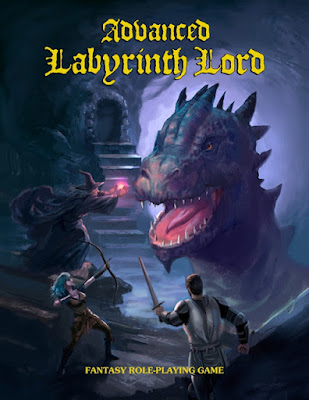 I am going to endeavor to return again to posting on this blog on a regular schedule – Tuesday-Friday to start out, maybe to move to Monday-Wednesday-Friday in time.
I want to return again to posting interesting, useful content, the kinds of things I would use to run my own game and build a campaign… with the hope in time to actually start running said campaign.
Return back to the roots, so to speak, of the OSR in its DIY phase, rather than wallow in the post-apocalyptic obsessive navel-gazing stage of the day.
So that will start on Tuesday; new year, new endeavor.
Hope to see you here!
Posted by James Mishler at 1:22 AM 1 comment: