Of late there has been a bit of chatter about Vancian style magic in D&D, as in, how much magic in D&D actually resembles the magic portrayed by Jack Vance in his Dying Earth series. 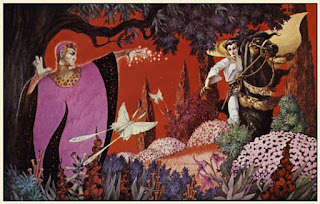 Short answer, "sorta-kinda." Longer answer, it is similar to Dying Earth magic in that it is "fire and forget," but in practice, there is a lot more granularity to the D&D system than there is to magic as portrayed in Dying Earth. That of course does not take into account the later appearance of Sandestins (effectively, re-skinned genies), which Vance introduced in his later Dying Earth stories. D&D magic-users can cast a LOT more spells at higher levels than any wizard of Dying Earth (or even of Lyonesse); however, D&D magic is a lot less "colorful" than that found in Dying Earth, but that is really more of a function of rules versus literature. If a judge wanted to, she could make D&D magic just as colorful as that found in the Dying Earth.
Also, in Dying Earth, wizards had to get by a lot more on their wits than most magic-users seem to do in games these days (or even back in the day). A truly Vancian magic-user would have Charisma as his second-highest stat, merely to take advantage of reactions, bargaining, intimidation, and simple bluster and bluff, and in combination with his Intelligence, wit and repartee. Most D&D magic-user players, at least, from being on the other side of the screen as I have, seem to just fade behind the meatshields after they have used their spells, or at best, fall back on flaming oil, caltrops, and other such more physical "bags of tricks."
That said, the brief and simple system to make D&D magic more "truly Vancian," is simple.
A magic-user can memorize a number of levels of spells equal to her level plus her Intelligence bonus. The magic-user cannot memorize the same spell twice. Memorization requires an hour of rest and then one round per spell level to impress the spell in the mind. Once the spell is cast (or miscast, or lost), the spell is gone from the mind.
Note that no magic-user in their right mind would ever bring their spell books (plural, one to six spells per spell book, no more) with them into the dungeon, as they are far too rare and valuable. Any foolish magic-user who does this deserves everything she gets (or rather, loses) when Something Bad happens to her spell books. 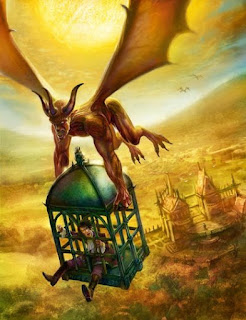 The Cugel Corollary: Anyone who wishes to may attempt to cast a spell from a spell book, if they can read the language (this presumes that spells are written in a readable language rather than a magical cipher). Use the character's "Spell Learning Probability" based on Intelligence and subtract 10% per level of the spell to be cast. ANY failure indicates that Something Bad happens to the attempted spell-caster...
For a longer, more involved version of the system, read my Jack Vance Dying Earth-inspired Adventurer class.
Posted by James Mishler at 9:54 PM 4 comments: