Investiture of Eternal Guardianship
3rd-level transmutation
Casting Time: 8 hours
Range: 10 feet
Components: V, S, M (gems worth at least 10,000 gp, which are consumed in the casting; plus, a single solid object of any value made of any material as the focus of the spell)
You transform a living creature into an immortal guardian of a single place; an intelligent creature must be willing (not under any sort of magical duress). So long as the creature so affected does not leave this place, it will not age or die of natural means, though it can be killed normally. It also need not eat, drink, breathe, or sleep (though it may do so if it wishes). It heals normally, even without eating or drinking, and it need not sleep during its long rest, merely rest. The creature also never advances in levels or hit dice, and gains no experience points while thus enchanted. The creature can learn new languages, and can learn new knowledge from willing teachers or from books, though none of this can cause it any improvements in abilities or statistics.
The area the guardian tends and must remain in may be no larger than a sphere 10 feet in radius per level of the caster; thus 20th-level caster allows for a sphere up to 200 feet in radius. Often the area the guardian must reside within is smaller, as set by the caster during the casting of the spell, perhaps a single room or cavern or small system of rooms or caverns, and the border is delineated by some design or motif, such as differently-colored bricks or stones, a painted line, a fence, or even a hedge of shrubs.
The creature innately knows where the boundary is, and never willingly passes the boundary, knowing it can mean instant destruction. Low-intelligence creatures cannot reason beyond their fear of the boundary, while intelligent creatures might determine that there is no ill effect… within their natural lifespan. Should the creature ever be forced to leave the defined area that it guards, for any reason, the spell ends, and it instantly ages all the years that have passed since the spell was cast. Should it age past its natural lifespan, its body will wither, turn to dust, and the dust will blow away.
The creature knows of any being that passes into its guarded area; by concentrating for a round it can view the being(s) remotely, as though present and within 10 to 30 feet. When so concentrating it can also hear the being(s) clearly, as though it were present, though it only understands any languages it already knows. If it is intelligent, it may also speak to the being(s), as though from the air or, perhaps, from some appropriate bit of décor within the area. The creature can always see clearly within its area as though it were perfect daylight, even through magical darkness.
Casting dispel magic on the creature or the entire area is inefficacious; the spell can be dispelled only by casting dispel magic (or other such spell) specifically, intentionally, and directly on the singular item that acts as the focus of the spell. This focus item cannot be removed from the area of effect; any attempt to do so merely causes the item to disappear from the hands or pockets of whomever attempts to remove it and causes it to reappear elsewhere within the area of the spell. The spell is also dispelled if the object is ever destroyed (thus the object is usually of some strong metal). Note that the object cannot be enchanted against destruction, nor with any other magical ability; the item detects as magical, while the area and the enchanted creature do not detect as magical or enchanted.
If the focus item is destroyed, or if the spell is dispelled, the guardian creature does not age instantly, and merely continues aging as normal, no longer having any benefits of the spell.

I've been pretty quiet here lately, been concentrating on playing games rather than writing about them... well, of course, I have to do SOME writing about most of the games I run. I've been running two campaigns, both 5th Edition.
I recently put the bigger campaign on hiatus, as I've got less time right now. The campaign is set in Kvin Mondöj, though less Heavy Metal and more Kitchen Sink. I ran the campaign at a local game store every other Sunday for several months, and even though we'd have an average of 8 to 10 players at a time, most of the characters reached 5th or 6th level... and that's where I find 5th Edition to kind of break down, with twice as many characters at that mid-level. I hope to pick up the campaign again, but first I'll have to figure out how to run it in a balanced yet challenging fashion for that many players at that level and higher...
The other game is a one-on-one I've been running with my wife. She's a huge Pokémon fan and so she introduced me to the anime midyear last year. After watching several episodes, I commented on how it would make a wonderful tabletop RPG, and wondered why such had not appeared as yet (in official licensed form)... and the rest, as they say, is history. 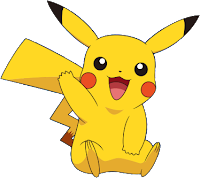 At first I looked through the usual suspects for a system to use (all the old Guardians of Order systems, for example), but I felt that they really didn't capture the experience just right. So I punted and started designing a Pokémon trainer class for 5E. I also snagged the Kanto Pokédex from Caniswolfman24 on Reddit; though it is a very good start, it only captures each Pokémon in a snapshot, and even then, as mix of each of the various generations as the author preferred... and as I wanted the Pokémon to be able to level up, just like they do in the game (and the anime), I had my work cut out for me... 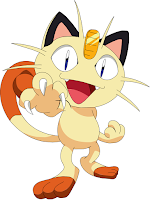 And then, too, I needed a world... well, a Region, really, as these adventures needed to take place in their own region. I could have used Kanto, or Johto, or any of the already defined regions, but I wanted something that would be unknown and wild and open... a real Pokémon Sandbox, so to speak. So I created the Byoga region (not based on any real Japanese region or other worldly region), and set about creating the region based on my wife's favorite artist. Try to figure it out...
The main map isn't finished yet; I just wanted to get a decent feel for the overall region, and then drill down to the individual hexes. The campaign started in Café Town, and her first adventures were all in the Café Hills. The region hexes are 5 miles, and the township hexes are each 0.20 miles. I packed a LOT of stuff in each hex; with the way Pokémon trainers wander, they tend to miss a lot, so she was guaranteed to find SOMETHING each session (each session is one or more "episodes," depending on the action that takes place and the length of the session).
Anyhoo, here are three of the maps, and I'll see about posting some of the information about the Pokémon Trainer class and the various Pokémon Racial Classes... 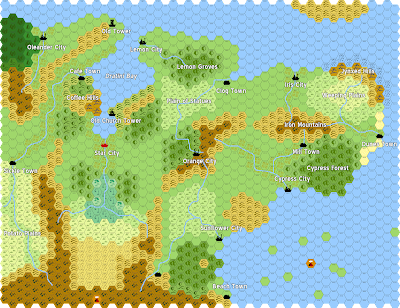 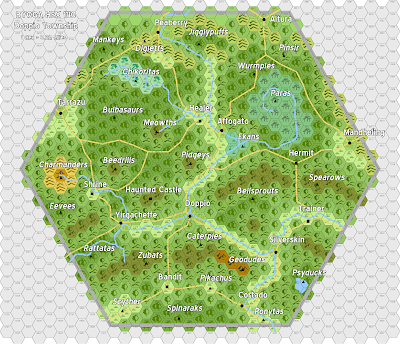 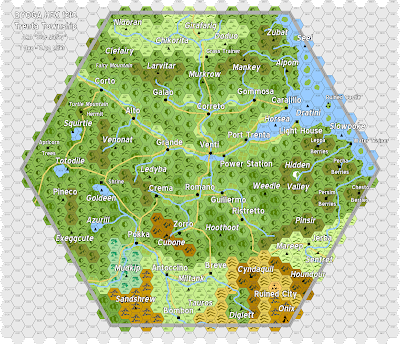 Posted by James Mishler at 8:55 PM No comments: