Here is the Amazon Race for my version of Labyrinth Critical, based on the Amazon class from No Signal. In my LC, all non-Humans have a racial class, however, they can add one or more of the seven standard classes to this by multiclassing. By my multiclassing rules, the character adds together all the XP requirements for his race and classes and advances in level in all as a single unit. All non-Humans are limited to 12th level. Multiclass humans are limited to 15th level. Only single-class Humans are unlimited in level advancement.

These canny warriors are all Human-like women of heroic proportions, hailing from deep in the Jungle Planets, and the jungles of the worlds they’ve colonized in secret. They are deadly as they are beautiful. They are usually led by the mightiest Amazon Swordmistress, or more rarely, an Amazon Priestess or Amazon Witch.

Amazons look like Human women of statuesque build, none standing less than 6’ tall with heroic proportions. As one should never ask an Amazon her weight, their typical weight range is unknown, save that it is usually most appropriate to cut a proper figure for her height. Skin and hair color can vary dramatically, including wild colors not normally seen in Human variations. 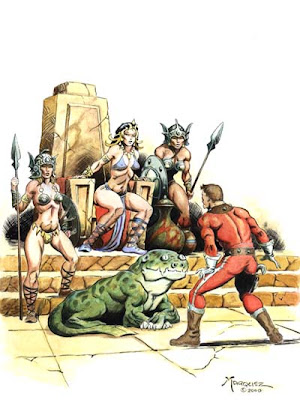 Battle Dancer: An Amazon adds her Charisma bonus to her AC; this bonus is in addition to any Dexterity bonus. If her battle motions are complemented by appropriate musical accompaniment, she gains a +1 to +3 to her AC depending on the quality of the accompaniment.

Advanced Seduction: Though anyone can attempt to seduce a target with the normal Seduction Skill, Amazons have a more potent ability, combining standard seduction methods with ancient Amazonian secrets and judicious application of special pheromones. The Amazon may use this special seduction ability only once per day, plus a number of times per day equal to her Charisma bonus. The seduction target must be male, or of an appropriate orientation in terms of romantic interest. The chance to succeed is based on the time taken to seduce the target: one hour is an Average check, one turn a Hard check, one minute a Difficult check, and one round a Very Difficult check. If the attempt to seduce fails, the Amazon cannot try on the same target until she gains another level. If the attempt succeeds, the effect is most potent, as per the charm person spell. Beginning at 7th level she may use this ability as though it were the charm monster spell. Seduce Skill: Base = STR + INT + CHA; plus (5 + CHA Modifier) per level after 1st.

Advanced Survival: Amazons undergo intensive survival training from childhood. A Survival Skill check can be used to successfully hunt and forage enough food for once day for a number of people equal to the Amazon’s INT + WIS Modifiers plus 1d6; the number rolled on the die is the number of hours the search takes. If the roll is negative, the Amazon has a random encounter! Survive Skill: Base = INT + WIS + CHA; plus (5 + WIS Modifier) per level after 1st.

Missile Deflection: When equipped with bracers of either a mundane or magical nature, an Amazon may attempt to deflect an otherwise successful missile attack by a save vs. Breath Weapon before damage is rolled. In order to deflect missiles, an Amazon may not be equipped with shield. Also, as the Amazon’s hands must be free to deflect missiles, she will reflexively drop whatever is held as if surprised. A single deflection attempt may be attempted per successful attack, but there is no daily limit to the total number of deflection attempts per day. Any projectile that attacks vs. AC, such as normal or magical arrows, crossbow bolts, or sling bullets may be deflected. In addition, Sky God technology weapons such as gunpowder propelled bullets, lasers, or energy beams may also be deflected. Missiles from spells like magic missile or lightning bolt cannot be deflected, or projectiles of unreasonably large size such as catapult ammunition or boulders hurled by giants. 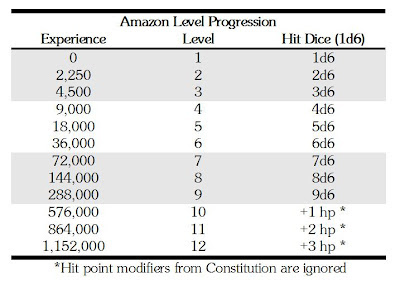 Reaching 9th Level: When an Amazon reaches 9th level she can establish a freehold called a Gynocracy. Because of her glorious deeds and renown, she will attract followers of the female persuasion (mostly Amazons, but also of other races) and Wookies (of either gender).