Troll Lord Games has released the second volume of the Magnificent Miscellaneum, filled with material designed for use with Castles & Crusades! 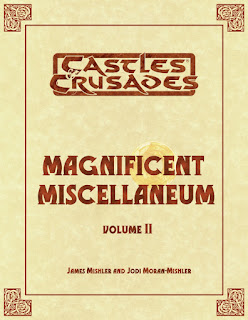 Gloedfoers: Infernal sheep who dance on their enemies heads and unleash a terrible form of hellfire!

Majamadhu: Spawn of medusa these tiny creatures pack a fearsome punch in their quest to avenge the death of their dam!

Muhafitaz: Lovely crystalline constructs that bring a shimmering doom to those who would steal their treasures!

Mwizikili: That which you cannot see, cannot hear, cannot smell, cannot taste, and cannot feel cannot actually kill you, but it can make you wish you were dead!

Najanma: Perhaps the most horrid undead creatures ever created! Use at your own risk!

Pankhaliya: A strange ally for heroes and adventurers, or a deadly enemy for hunters and villains...

Songdutha: These friends of druids will rock your world if you do not respect their authority!

Thitwee: Surely, this creature’s name shall become an insult applied to fellow gamers at tables everywhere!

Thûtuszlak: The next time your friend tells you his character was killed by a slug, don’t laugh; it might have been one of these...

Varasuma: If you don’t have a sense of humor, pray you do not encounter these mirthful fairies!

Bonumcanis: Summon a hound from heaven to act as your guardian!

Choreamortis: Use the dead to your best advantage!

Luxbeata: Call upon the shining light of the heavens to punish evil and purify the good!

Malumcaligo: Conjure a terrible black fog to protect you from your enemies!

Introducing Eyebites, spells that can be cast with but a single glance, word, or motion, outside of normal initiative!

Foudrecout’s Somnuscent Interjection: Enchant your opponents with a magical sleep!

Velophandre’s Toxic Revelator: Call upon all poisons to reveal themselves to you!

Claw of the Lich: Gain great power over the undead!

Eye of the Gorgon: Ruin your enemies by turning them to stone!

Ear of the Fish: Speak with fish!

Jar of Light: Let no darkness overtake you!

* By James Mishler and Jodi Moran-Mishler *