[Review] These Goblins Won't Kill Themselves

TL; DR: These Goblins Won’t Kill Themselves (TGWKT) is a fun, one-shot dungeon delving adventure in the classic, humorous style reminiscent of the early days of fantasy gaming. If you liked Keep on the Borderlands and the April issues of Dragon, this is right up your alley…

In Short: TGWKT is a fantasy adventure module written in a classical style; that is to say, it deals with a fairly standard type of adventure (Seek the Treasures Lost in the Bad Guys Lair), and to this it adds a heaping helping of another classic element – humor. TGWKT isn’t anything new – it evokes the same style of adventure classic in TSR modules in the late ‘70s and early ‘80s, down to Gygaxian naturalism, flavor text, puns, and in-jokes. But for this reviewer, that is very much a feature, not a bug. Much like In Search of the Unknown, Keep on the Borderlands, and Horror on the Hill, it is a light dungeon crawl adventure, suitable for play in one to three sessions. So if that is what you are into, it will be right up your alley.

The Look: TGWKT evokes the classic look; most of the interior art by Dave Peterson would be at home in any classic OSR style adventure. The art mostly depicts scenes and characters in the module, so you can print those separately to show to your players. The maps are simple, but well done and utilitarian. The font is simple and easy to read. Flavor text is in bold. Like many of the old modules, it’s not fancy, but it works, and unlike a lot of modern works, it won’t kill your printer cartridge to print it up to have a paper copy at the table. 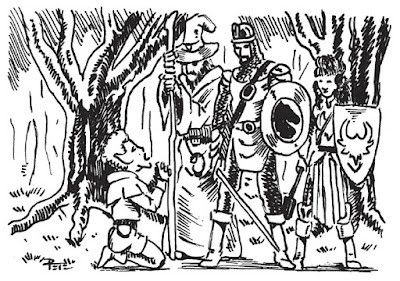 The Feel: TGWKT definitely falls within the “classic punster” or “tongue-in-cheek” style of adventure; the fact that it is the first in a series of adventures taking place in the “Lands of Igpay” should give anyone reading the cover fair warning of the style of play expected. It feels like something one would find as an insert in a classic April issue of Dragon Magazine. However, while the adventure certainly works well with the humor style of play, if that’s not your thing, the core elements can also be used with a more heroic style of play with minimal work. Minus the humorous elements, TGWKT fall solidly in the “heroic fantasy” style of play, with a dash of Faerie style (as Igpay is a “land apart” from the character’s normal homeland).

The System: TGWKT uses a generic system, much like the various Eldritch Enterprises adventure modules that Clark has published with Frank Mentzer, Jim Ward, and Tim Kask. This is really a non-issue; most of the monsters can simply be lifted from whatever system you are using by simply looking for the monster name or a similar type in your core rules. A little conversion might be needed on the fly, but even for an inexperienced game master, the conversion needed is minimal.

The Adventure: The characters, removed from their own natal lands, somehow end up in the Land of Igpay, a fairy-tale land where the Elves have been at odds with the Goblins over an unfortunate misunderstanding. Elven heroes put a stop to the Goblin War some time ago, but now the Goblins are back, and the Elves today have no defenses, being pacifists. Thus they offer their treasures to the adventurers if they will go into the Goblin caves and rout out the enemy, or at least, return to the Elves their lost weapons of power so that the Elves can once again defend themselves. After a short wilderness trek, the adventurers must delve into the lair of the goblins, where several fearsome tricks and traps await, in addition to the martial menace of the goblins. There is also a lead-in to the sequel, though this can be ignored if the game master simply wants to run the adventure as a one-shot. 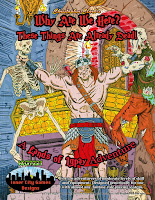 Some of the traps in the module are outright lethal… which again, to this reviewer is a feature, not a bug. So if you do not like the “Save or Die” style of gaming (or worse, the “No Save and Die” style), you might need to tone down a few things.

NB: Back when TGWKT was originally released, Inner City Games Designs sent me a complementary copy of the PDF to review. As they have now released the sequel Why Are We Here? These Things Are Already Dead! I was reminded of TGWKT and went to find it to finally write the review… and discovered that at some point in the previous year, I had lost it in a purge of my computer. So I went and bought a copy of the PDF in order to review it.

Buy These Goblins Won’t Kill Themselves on DriveThruRPG

Buy These Goblins Won’t Kill Themselves on RPGNow