I'm going to start off a series of posts about unsung worlds with the posting of my latest Hexographer map, the Northeastern Sea of Tears region of the Perilous Lands.

But more on all that later. The hex scale of the original maps was set at 20 miles per hex; for my own campaigns, I often used it at 24 miles. Now I will be using it at 25 miles per hex, which for most maps of similar regions, I find to be superior for many reasons, most notably for ease of breaking the map down into child maps of 5-mile hexes or into single hex maps of 25 one-mile hex sort... 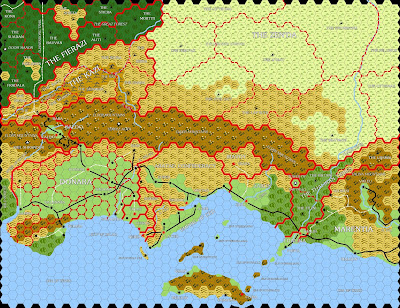 As usual, click to embiggen...
Posted by James Mishler at 1:52 AM