The Tepeshy immortals can be separated into two factions, that of Burza and that of Vadok. This division goes way back to the days of Taymor, when Nyx and Thanatos fought over the souls of that realm.

Following the destruction of Taymor, they decided that, in the matter of the surviving mountain Taymorans, they would hold a truce and work together to keep the Taymorans a going concern. Thus, while the Tepeshy view them as a married couple, they are viewed as a feuding married couple on a level that make Zeus and Hera seem positively like lovebirds. But as always, even with the feud between them, they and their “family” work together to defend the Tepeshy as a whole.

Even though most of the other Tepeshy immortals owe their immortality to Thanatos, as things go, they are no more or less loyal to the Grim Reaper than they are to any other Immortals, and so the Tepeshy immortals play each other off one another for immortal favor and for further power on the mortal plane.

In Tepeshy religion, all the immortals are viewed in human form; like the Tepeshy, with humanoid characteristics.

I should note here that most Tepeshy look almost perfectly human; most have only a slightly odd cast to their features. Others are less human in appearance, and more monstrous. The best way to understand the Tepeshy physical type is to consider the Addams Family extended family as seen during the party scene in the original movie. Most are slightly off-human norm, some more so, and others quite inhuman… and then imagine what the Addams Family extended family was like in medieval times. That’s the Tepeshy…

Unlike their Traladaran cousins, the Tepeshy do not revere their immortals in a single, overarching faith; each has their own temple hierarchy and they generally remain aloof from one another. Temples are not found in the settlements; they are at a distance, though each settlement has a couple of shrines and the major settlements have shrines to most of the immortals. Low-level clergy (3rd level and under) tend to the shrines, while higher-level clergy pass through to perform more important rites at the settlement shrines during certain unholy days. Most Tepeshy need nothing more than the local village priest can provide; if they do need more, they must go on a quest to the nearest temple of the appropriate immortal or seek out the high temple of the immortal if they require truly miraculous assistance.

The Tepeshy immortals (and more importantly, their clergy) work on a quid-pro-quo basis, requiring sacrifices and payments for their services. The village clergy require low-level sacrifices, such as foodstuffs, animals, and various useful goods (for themselves) and coin and other valuable treasures for their immortals (kept in the shrine or temple treasury, considered the treasure of the immortal, literally). Higher-level clergy require more personal sacrifice, of one’s own blood, a quest, or even the capture and sacrifice of an enemy or specific monster (usually of Lawful sort). These are often personalized to the nature of the immortal.

All the Tepeshy immortals are served by ranks of demons; these demons, regardless of type, all conform to some aspect of the immortal they serve. Thus, a Type IV demon serving Burza would be more wolf and human like than boar and ape-like, while a Type IV serving Strigz would have two faces and be armed and armored.

Each immortal has their own “divine reward” on this world or in another, for their followers. Those whose worship is simply “good enough” end up with their souls stuck for eternity in the Underworld overseen by Rumgoth. Those who displease or fail their patron immortal are cast into the Abyss to be eternally torn apart by demons. 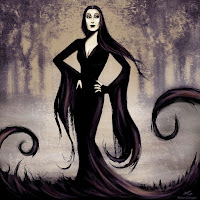 Burza, Mother of Night, Queen of Wolves (Nyx) appears as a matronly woman of indeterminate age; she has pale skin, blood-red lips, long raven-dark hair, and deep, hypnotic eyes, and wears a plain black dress as dark as night. She is never depicted as a wolf herself; the wolves are her children, and she is their queen. She is often depicted with a wolf or pack of wolves. Her symbol is a stylized wolf’s head. Her colors are black and white; wolf pelts are often used for cloaks or other décor. Her greatest servants are rewarded with transformation into a werewolf; her more powerful servants also gain dire wolves as steeds. Her followers often keep wolves or wolf-hounds as pets and guardians. Her clerics can speak with wolves. Her following is strongest among those who live mostly by the hunt or live in the heavily-forested highlands of the mountains. Her faithful can count on being reincarnated as wolves. Note that it is not against her faith to kill wolves; after all, it is a “wolf-eat-wolf” world. However, it is blasphemy to hunt a wolf with magic or any other “unnatural” methods. Wolves who comport themselves well in their death may be reincarnated as wolves or even werewolves; those who die poorly are reincarnated as humans. 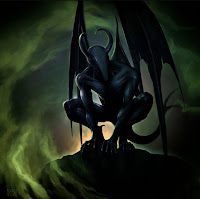 Burguul, Lord of Shadows and Lies, Messenger of Burza (Masauwu) appears as a faceless shadow of a horned man with the wings of a bat; it is said that bats are his messengers, and thus also the messengers of his patron, Burza. His symbol is a stylized bat. His colors are black and brown. His greatest servants are transformed into werebats; some of his more powerful servants also gain giant bats as steeds. His followers often keep bats and giant bats as pets and guardians. His clerics can speak with bats. Those who displease him, or his mistress, are sent nightgaunts as punishment. His faithful can count on being reincarnated as bats; those who displease him are cast into the Abyss to be eternally torn apart by demons.

Vadok, Father of Death, King of Vampires (Thanatos) appears as a pale-skinned man of monstrous countenance, with great fangs and glowing red eyes, always dressed in regal finery tainted by the grave. His symbol is a human skull, sometimes surmounted by a golden crown with blood-red rubies. His colors are black and red (in all the colors of blood). His followers seek to placate him, for his canon claims their only way to avoid being cast into the Abyss to be tormented by demons for eternity is to serve him eternally in death, as skeletons, zombies, wights, or some other form of corporeal undead (in this guise Thanatos has nothing to do with incorporeal undead, nor in general ghouls, ghasts, mummies, or liches). His most powerful and worthy servants are transformed into vampires. These are often served by rats, giant rats, and wererats. He is served by Death Demons and Lesser Reapers. 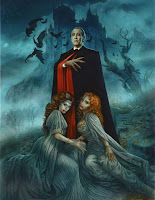 Zhurm, Patron of Sorcerers, Messenger of Vadok (Alphaks) appears much like his master, Vadok, but is much more human in appearance, taller, almost suave, with much nicer finery. However, when he angers, he gets even more hideous and monstrous than his master. He is usually accompanied by two or three beautiful women (succubi), who act as his chorus. He also appears as a red mist within which are seen red glowing orbs for eyes. His symbol is a blood red winged ouroboros. His colors are black and red. In addition to his role as the messenger of Vadok, he is also the patron of Tepeshy sorcerers; those who rise high enough in their power are taught how to summon demons by Zhurm himself. Like his master, he is served by Death Demons and Lesser Reapers, as well as succubi; unlike his master, he is also served by ghouls and ghasts, and at times, red dragons.