There have been several attempts to quantify the alignment system from the beginning. OD&D had the alignment chart; Judges Guild released their “Alignment Adders” system on the Character Checklist (likely based on the listing of Lawful/Chaotic and Good/Evil traits in Gary’s article “THE MEANING OF LAW AND CHAOS IN DUNGEONS & DRAGONS” in Strategic Review #6); GAZ7 The Northern Reaches, a gazetteer for the world of Mystara, included “Personality Traits,” likely based on a similar system used in King Arthur Pendragon by Chaosium. 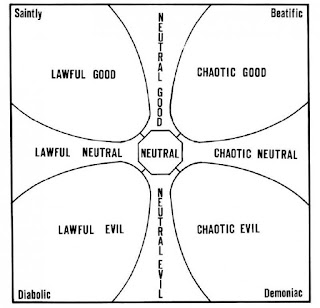 And here is my attempt at a system… for all that anyone uses alignment anymore, hopefully it is helpful.
The Universal Alignment Profile (UAP), based loosely on the Universal Personality Profile from Traveller, is a series of 10 numbers that provide a basic breakdown of the Lawful ethics and Good morals – or lack thereof – of player characters and NPCs.
The first five numbers create the Law/Chaos axis, the second set of five the Good/Evil axis. Numbers range from 0 to 13, though only Demons and creatures of like ilk may have 0 in any trait, and only Angels and similar beings may have a 13 in a trait. The higher the trait, the more toward the Law or Good state of the trait. An 11 in Honest means the being is very honest; a 2 in Loyal means the being is very treacherous.
For player-characters, let the player set each trait at the beginning of the campaign. If a character is thereafter tempted by Chaos or Evil in regard to any of the traits – say, for example, offered a bribe – and the player is not quite certain how the character would react, roll a d12 against the trait or traits affected. A bribe, for example, might indicate that a character’s Honesty is being tested; if the Honest trait is 8, and the roll is 9 or greater, the character would accept the bribe.
These traits are not intended to remove player agency; they are a guideline only, to help the player better characterize their character’s alignment traits. If the player above decides that the character would accept the bribe, perhaps the player would then lower the Honest trait from 8 to 7.
When creating an NPC, roll for the traits, as listed below. Then list the traits in order using only the numerical value. For example, a character with the following:
7 Cautious (Rash)
4 Industrious (Slothful)
10 Loyal (Treacherous)
9 Principled (Anarchic)
3 Vigilant (Negligent)
10 Generous (Greedy)
11 Honest (Deceitful)
8 Humble (Prideful)
8 Kind (Cruel)
7 Patient (Wrathful)
Would be 33 and 44, thus Neutral Good, and would list the UAP as 74A93AB887. The character is Loyal, Generous, and Honest, but rather Lazy and Careless. He would make a good friend, but a terrible guard.
Note that the overall totals of each lean toward Neutrality and Law, and Neutrality and Good; this is in keeping with Gary’s advice that most people lean toward Law and in general, Good, and that few are truly Chaotic or Evil. Feel free to play with the numbers and the traits as you wish, of course. 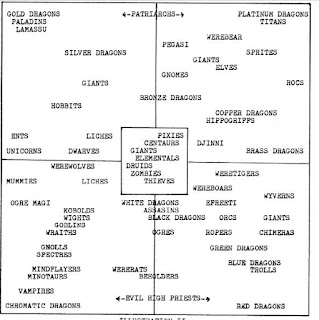