NOTE: This post is from my old game blog, the original Adventures in Gaming, which is closed. I've had enough requests to re-open this post that I've decided to just do a throwback post. It is copied here, more or less, like it was then. Originally posted in October 2009.
*****
There's a thread on the Original D&D Discussion boards about the Blackmoor map, specifically, where it came from originally. There are different reports on this, apparently based on different things said by Dave Arneson at various times. Some believe the map coastlines and rivers are based on Lake Superior, others say it is based on old maps of the Netherlands, and some believe it may be a combination of both.
Dave himself wrote in First Fantasy Campaign that the maps were "...originally drawn from some old Dutch maps. Much of the rationale and scale was based on data found with the Dutch maps. Later, the game moved south and we then used the Outdoor Survival tm map for this phase of the campaign..."
One point I believe has been missed and has greatly complicated matters is that the well-known map, the map that was published in the Judges Guild First Fantasy Campaign booklet, was not, in fact, the map originally used by Dave Arneson! This map was created by Bob Bledsaw for the product; that the work is Bob's is indisputable, as he was the cartographer on all the large scale maps (the 18 region maps for the Wilderlands), and this is definitely his cartography style.
So that map, and all the maps made for Blackmoor thereafter, were in fact based on Bob Bledsaw's interpretation of Blackmoor... not Dave Arneson's original map, which presumably is what is found on page 12 of the First Fantasy Campaign. There, Dave writes: "In redrawing the first campaign map, I decided that it would be advantageous to make some minor changes along the south and west borders to link it with Judges Guild's "Known World" area..." 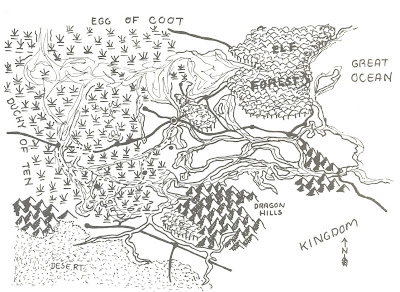 However, from the great differences that exist between the original map and the Bledsaw version, much more was changed; whether this was changed by Bob with Dave's blessing or they were changes by Dave that Bob made to the map when he drew it may now never be known. A few points from the "original" map in comparison to the Bledsaw and subsequent maps:
WATERWAYS 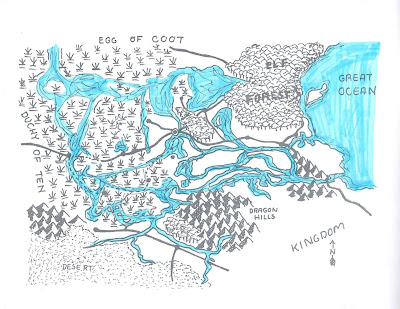 The "inner sea" that would be later named "The Black Sea" in the TSR version was much smaller, and not (apparently) directly connected to the "Great Ocean" (which was later named "The North Sea" in the TSR version). The "Sinking Lands" thus were not at all yet sunk. There is no sign of the peninsula that is home in the Bledsaw version to the Egg of Coot, and in fact, it seems the Egg of Coot is much further to the north, though the "Firefrost Channel" already exists. The waterways of the southeast are much changed, with many of the lakes being moved south and west (likely to make room for the mountains, which were greatly expanded in this region), while the waterways in and around the southwestern swamps are most changed in the area that would be known as "Loch Gloomen."
SETTLEMENTS 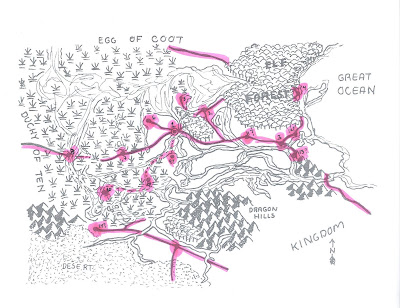 Most of the settlements are recognizable; a few that fail to appear in the Bledsaw version actually appear later in the TSR version...
Of course, with the Bledsaw maps being designed to match up with the Wilderlands maps, and the region there near the Valley of the Ancients being utter wilderness, the lack of these settlements and roads makes some sense... As for the "old Dutch map"... well, here's some food for thought...
ORIGINAL ORIENTATION 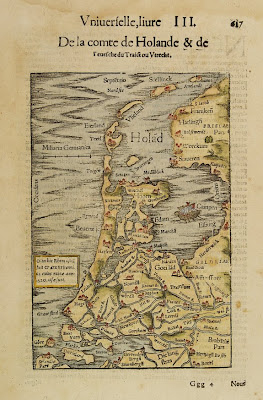 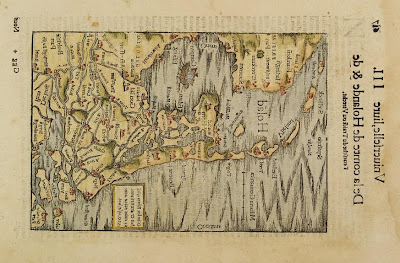 As usual, click to embiggen... and then look closely at the lakes in the western peninsula jutting north (modern North Holland) that is, in the flipped and inverted version, the "southern peninsula" jutting to the east... and if you take the waters of the North Sea outside the Zuider Zee ("Holad") and make them land, say desert in the west and the Great Kingdom in the east... it looks a bit familiar, no?
HOW DID HE DO IT? 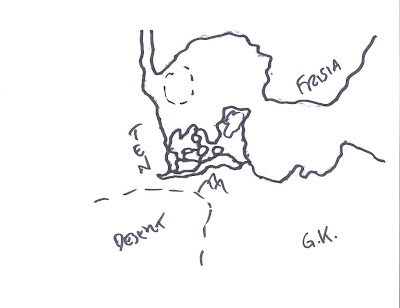 Of course, back in the day they didn't have even simple computer programs that could manipulate maps... all he had, likely, at best was a photocopier or mimeograph machine; at worst, he had an original copy of an old Dutch map of his own, likely from some old history book, which lacked printing on the back of the page (you'll find a lot of old history books with maps had these as fold-out insert sheets with no printing on the back of the map).
So Dave either took a copy of a map or an original map and did one of two things: 1) He had a light table (easy enough to make with a piece of strong plastic and a light) and set the map on the table, then drew on the back; or 2) He took a thick black marker that would bleed through the back of the paper, drew along the coast lines on the front of the map, and then flipped the map over and using the bleed-through lines as a guide, drew the coastlines and rivers.
I used the second method, with the thick black marker, to make the map above... Blackmoor at the center, desert to the south and west, Great Kingdom to the south and east, ocean to the east, Frisia to the north and east (and yes, that's exactly where Frisiae, or the RW Frisia, really is), and Duchy of Ten to the west. Egg of Coot... note interestingly that the Zuiderzee, the extension of the North Sea that went into Holland, was slowly reclaimed for land through the Zuiderzee Works, a decades-long project that made whole new land. Once upon a time, historically, it had been land... and sank... through the Middle Ages. Sinking Lands? hmmm... and later, the land of the Egg of Coot rose from the seas (right were, on a modern map of the Netherlands, you would find one of the major pieces of land reclaimed from the sea)? More than mere coincidence, I think...
I also think that perhaps when he and Bob put together the new map for the First Fantasy Campaign, Bob went back to the original "Old Dutch Map," or something close to it, for inspiration to expand out the north... which had been truncated by Dave in his original map (maybe he only had the southern portion of the map available originally?) Maybe, during their conversation while Bob was trying to make this new map, one or the other suggested putting the Egg of Coot on "reclaimed" land...
Finally, I should note that Blackmoor proper, east to west from Jackport to Hanford, is about 300 miles using the original Bledsaw map at 10-mile per hex scale... the region of North Holland, which is essentially the area used to "create" Blackmoor using the Old Dutch Map, was about 30 miles north to south, from Amsterdam to where, in the Old Dutch Map, the coastline was on the north... so all Dave had to do was multiply the RW scale by 10...
Finally finally... one must wonder. "Duchy of Ten"... is it possible that the map Dave used numbered the maps on the bottom of the page? Numbered them as "plates," as many maps and illustrations were so called in those days? Perhaps, just perhaps, the "Duchy of Ten" was inspired by the fact that in that area of the map page, near what would have been the bottom of the page, were the words "Plate No. 10"...
Posted by James Mishler at 3:38 PM