I figure I’d start taking stock at the beginning of my gaming career. I started working in the industry full time on January 1st, 1995; my last full-time day in the industry was September 28, 2012. 17 years total, with a few minor interruptions in-between, and since January 2013 I have been self-publishing part time through James Mishler Games.
In that time I have designed, written, edited, and published games; written magazines and books about games; bought, sold, marketed, and advertised games in manufacturing, distribution, and retail; and run conventions and other gaming events. The only thing I’ve not done is anything artistic, other than cartography, but that’s due to lack of talent rather than any lack of desire or need. 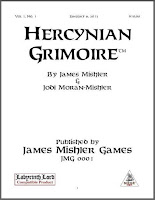 This January will be James Mishler Games’ 10th anniversary, with the release of the first (and only) issue of Hercynian Grimoire on January 9, 2013. In that time my wife and I have published 57 products, ranging from simple maps and character sheets to Hexcrawl gazetteers and monstrous sourcebooks, and everything in between. Of these, six are Silver Best-Sellers (sold 100+) and 13 are Copper Best-Sellers (sold 50+).
I’ve sold 2,680 units at an average of $1.57 each (net) and given away 3,321 units. This will be the first year I get a 1099 from DriveThruRPG, which tells you how piddly some… well, most year’s sales have been…
Here are the Top 5s based on units sold and dollars earned:
Top 5 Sellers by Numbers
1. Vampires of the Olden Lands
2. Barbarian Class
3. Necromancer Class
4. Chronicles of Mhoriedh Map 00 Olden Lands Continent
5. Ogres of the Olden Lands
Top 5 Sellers by Dollars
1. Isle of Eldisor Hexcrawl Campaign Cyclopedia & Gazetteer
2. Hercynian Grimoire #1
3. Ghosts -- The Incorporeal Undead
4. Vampires of the Olden Lands
5. Ogres of the Olden Lands

2022 was a banner year in many ways. We published 20 of the 57 products on our list this year, including the Isle of Eldisor, which was the culmination of three years of attempts to realize a specific vision of a campaign setting.
One third of all published items, more than a third of all sold items, and almost half of all JMG income were realized in 2022, mostly in early 2022.
For most, that would be a reason to push through and move on to the next level of publishing.
But no, not for me.
After the Adventure Games Publishing Debacle, I decided I would only make my game writing a sideline at best – something for fun and for money to buy more games. Self-publishing games for anything more than that, well, I found out it is not for me.
And on top of everything, right now is a very, very slow time for sales. Between Labyrinth Lord moving to a 2nd Edition next year and the Shadowdark RPG not even yet being released, sales have been slow the last couple of months. Very, very slow since September when the new edition of Labyrinth Lord was announced.
So, between the big push to publish earlier this year, and the big slowdown while waiting for the new edition of Labyrinth Lord and the release of the Shadowdark RPG, I think it is time to take a break.
We’ll call this one a sabbatical. 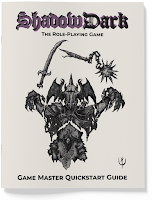 The sabbatical will last at least until the release of the new edition of Labyrinth Lord and the release of the Shadowdark RPG, both of which I expect will occur sometime in early to mid-Summer (fingers crossed!)
In the meantime, I am going to recharge my batteries by spending time with my wife; gaming with some friends; and cataloging and rebuilding my once-extensive game collection. I have one other neato Secret Project I need to work on for some friends, but other than that, all my gaming will be purely for fun until I see some cool new books in hand.
I do not plan to do any blogging during the sabbatical. Blogging… isn’t what it once was. There was the Golden Age of early Blogger & Forums; then the Silver Age of Blogger/WordPress and Google+; and finally, the Bronze Age of, well, whatever was left. And then there’s now, the Iron Age, with the Wastelands of Discord and the Fall of Twitter. So… meh.
Check back here around July 1st, 2023, to see what comes next; by then I hope the new edition of Labyrinth Lord and the new Shadowdark RPG will either be on my shelves or on the way.
Until then, good gaming!
Posted by James Mishler at 4:58 PM