I was walking through the drugstore the other day when I stumbled on a sweet set of dice in the toy aisle: Rory's Story Cubes from Gamewright. 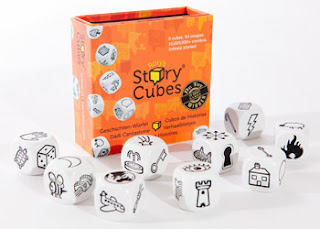 It is a set of nine 6-sided dice with icons instead of numbers. The basic idea is that you and your friends roll the dice, in various combinations, and using the images that are rolled, build a story. While the images are generally "modern," there is enough there that you can readily adapt anything you roll to be used even with a fantasy role-playing game. Need a quick adventure for your players tonight, but haven't a clue about what to do? Grab a couple of these dice to break your judge's block. Roll 'em all or just a few. Looking at the set I have sitting on the table next to me, I'm picking out:

Conversation Balloon: The party starts in a tavern, speaking with an old guy...
Alien Face: Okay, the bad guys are from elsewhere... let's go with goblins.
Key: The goblins have stolen a key... from...
Wand with Magic Sparks: a Wizard! So it is a magic key, and the old guy is a wizard. Maybe to a magical treasure?
Foot: The goblins got away and are now hiding out several days away.
Scarab: They are hiding out in an old ruined Egyptian-style temple. Maybe some zombies and mummies around, too?
Eye: They have spies watching out in case they are followed...
Comedy/Tragedy Masks: An ally of the players is not what he seems... the spy is in the midst of the characters? Maybe an assistant of the wizard sent with the characters?
Many-level Building: Turns out the temple has many levels... so yeah, a goblin lair on the first level of the dungeon, a mixed level on 2nd, and the mummies on the 3rd level...

There we go... judge's block solved! 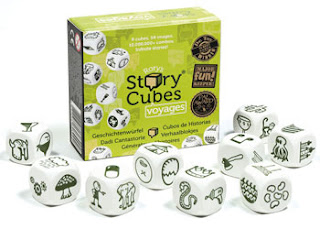 They also have Rory's Story Cubes Voyages, which looks like it will be even more appllicable to D&D and other fantasy players. I'm going to have to hunt that one down... the regular Rory's Story Cubes is available through game distribution (at least through Alliance and ACD), so you can order it through your local hobby shop. I'm not sure if the Voyages version has made it into game distribution yet...

Of course, this will also be a lovely little game to play with children, too; it's a Dr. Toy 10 Best Games winner. They certainly have my recommendation; and I can't wait to find a copy of the Voyages set!

N.B.: I stumbled upon these in the store and bought the product with my own money. No one paid me for this review.
Posted by James Mishler at 12:44 AM