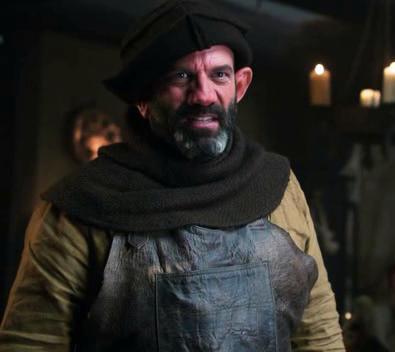 Dwarfs are stout, short, bearded demi-humans who average a height of approximately 4 feet and weigh about 150 pounds. Their skin, hair, and eye color ranges in all varieties of the Human norm, and they may exhibit physical characteristics of varying human ethnic types. Dwarfs spend much of their time underground, in their mines, singing and mining gems, metals, and minerals. They usually live above ground, often in a cottage or barracks with their brothers and cousins. The Dwarfs of Fantasia have the duty of mining the special diamonds found in that realm in order to provide magic dust for the Faeries.

All dwarfs are male; there are no female Dwarfs. Dwarfs reproduce in one of two ways. Most Dwarfs are hatched from eggs. These eggs are found in rich veins of minerals, metals, and gems; thus, Dwarfs mine not merely for the joy of gathering the metals, but also to find their children! All Dwarf eggs are found in clutches of 2d6 eggs; all Dwarfs from the same clutch are considered to be brothers. All Dwarfs hatched from eggs from the same mine shaft are cousins. Dwarfs can also reproduce, after a fashion, by adopting a human child and raising it on Dwarf food; the child so raised grows up to become a Dwarf. Usually, only outcast Dwarfs raise such children, but it is not unknown for kindly Dwarfs to adopt a lost child or orphan.

Darkvision: Dwarfs have the ability to see in the dark up to 60 feet.

Short: Due to their short height, Dwarfs cannot use two-handed swords or longbows.

Stonecraft: From their experience underground, Dwarfs have a 30% chance of detecting traps, false walls, hidden construction, or noticing if passages are sloped. Dwarfs must be actively searching for these abilities to function. 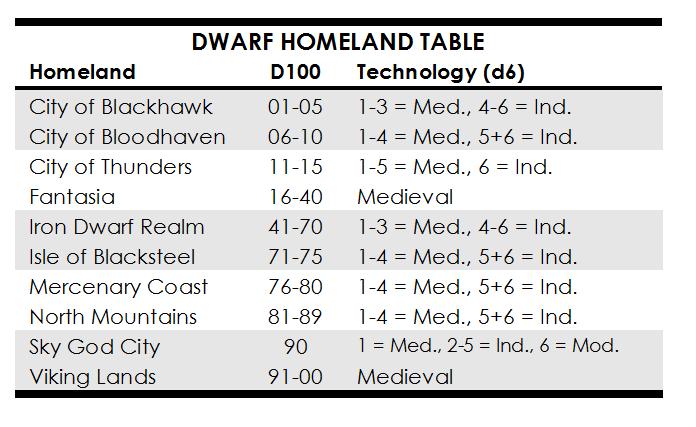 Bossy: A Dwarf Foreman is born, not made; his name naturally reflects his leadership status, and as such, together with his earth-born allure, he has the ability to charm Dwarf once per day per level. This ability operates as per the charm person spell cast at the Dwarf Foreman’s level, though it only works on Dwarfs. At 9th level he gains the ability to mass charm Dwarfs, as per the mass charm spell, once per day, and gains an additional use per day for every two levels above 9th (twice at 11th, three times at 13th, and so forth).

Craftsman: In addition to a random Secondary Skill, a Dwarf Foreman may choose one of the following Secondary Skills as his Primary Profession.  The Dwarf Foreman’s skill in his Primary Profession begins at 50% and increases 5% per level after 1st level. Choose one: Armorer, Blacksmith, Engineer, Jeweler, Miner, Prospector, Stonemason, Tinker, or Tunnel Runner. If he is multi-classed as a Warlock, he can instead choose from Alchemist, Dirge Singer, Lorekeeper, or Runecaster.

Pick Specialist: A Dwarf Foreman gains a bonus to hit and to damage with a club as per the weapon specialization of the Fighter class. The bonuses apply to both light and heavy picks. He does not gain the ability to choose other weapons for specialization at higher levels, and may only improve his ability with the pick.

Improved Stonecraft: From their experience underground, a Dwarf Foreman has a 50% chance of detecting traps, false walls, hidden construction, or noticing if passages are sloped. This ability can also be used to identify raw minerals, metals, and gems, and evaluate them. This chance improves by 5% every level after 1st level. A Dwarf Foreman must be actively searching for these abilities to function.

Thane: At 9th level a Dwarf Foreman is eligible to found his own Dwarf mine and settlement and settled down as Thane (Lord) of that settlement. If it is in lands already inhabited by Dwarfs, he must get the permission of other Dwarf Thanes in the area before he digs his mine and builds his settlement. As long as he has been a successful Foreman and is well-liked by the other Dwarfs of the community, he will be able to attract 5d8 Dwarfs to his banner who will be the founding core of his settlement.
Posted by James Mishler at 4:59 PM