The Mystara Monstrous Compendium Has Been Released in PDF!

Being a Mystaraphile, it should come as no surprise to any of my readers that, in my opinion, one of the BEST Monstrous Compendiums to ever come out of the 2nd Edition of Advanced Dungeons & Dragons was the Mystara Appendix. Wizards has finally released the PDF on DriveThruRPG. Being designed for 2E, it is readily compatible with Labyrinth Lord and Castles & Crusades, so you should definitely check it out if you want a collection of weird and interesting monsters!

I've included the info from the DTRPG listing below. I gotta say that I really enjoy the historical info on all the new PDF releases from Wizards. 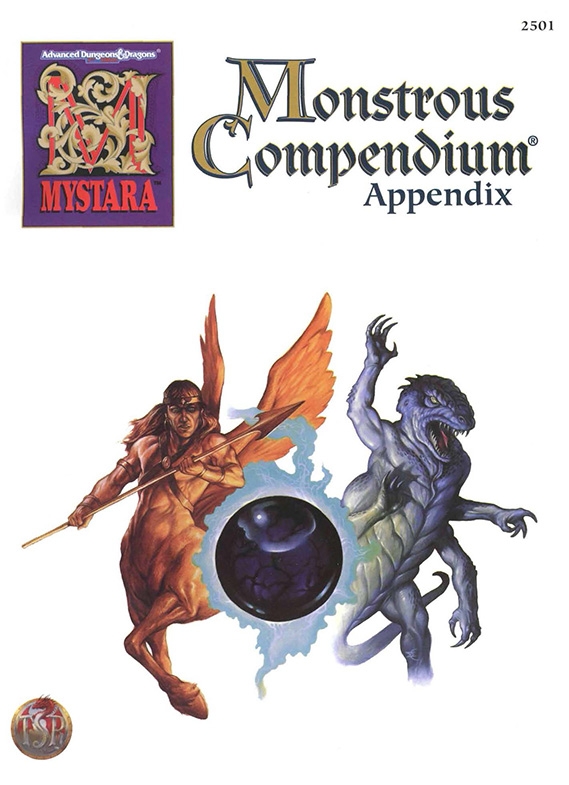 Rare dragons, wondrous giants, bizarre humanoids... For years such creatures have filled classic D&D campaigns set in the world of Mystara, along with the exotic hivebrood, rakasta, thoul, and many more.

Now, for the first time ever, more than 100 of Mystara's unique and most popular creatures have been developed and defined in AD&D game terms! This must-have volume will delight and horrify players of the new AD&D Mystara campaign as well as any fan of the all-time favorites within.

Moving Mystara. In Dragon #197 (September 1993), Bruce A. Heard announced that the Known World of Mystara would "be granted much greater attention and support as a major TSR line." To allow for this, Heard said that the Known World was "graduating" to the AD&D game. According to TSR's original plans, the new line was to kick off with a Monstrous Compendium, a dungeon adventure, a Castle Amberville Gazetteer, an almanac, new novels, and a new accessory about the .

Fans were a bit shocked, and some protested that AD&D didn't need another game world - and they were right there, as TSR's proliferation of game worlds was probably already causing them economic problems. What they didn't realize was that Basic D&D had been losing ground to AD&D for over a decade, and that TSR had been flailing about trying to find some way to support Basic D&D since 1990 - without success. The Classic Dungeons & Dragons Game (1994) would end up being the last release for TSR's introductory gaming system. If Mystara hadn't transferred over to AD&D, the world would have died.

Although TSR supported Mystara for only three years as an AD&D game world, from 1994-96, along the way they produced some handsome boxed sets and largely fulfilled their original plans. It all kicked off in August 1994 with two releases - Karameikos Campaign Setting and Mystara Monstrous Compendium Appendix.

It also goes further afield, reprinting monsters that appeared in the DA (Blackmoor), XL (Licensed), XS (Solo), and O (One-on-One) series, as well as monsters from some later releases like Wrath of the Immortals (1992), Champions of Mystara: Heroes of the Princess Ark (1993), and "Rage of the Rakasta" (1993).

Prior to the publication of the Mystara Monstrous Compendium, Known World monsters had largely been collected in three volumes. Monsters from the rulebooks had been compiled in the D&D Rules Cyclopedia (1991) while monsters from adventures were compiled in AC9: Creature Catalogue (1986), which was later revamped as DMR2: Creature Catalog (1993). The Mystara Monstrous Compendium largely supersedes those previously compilations, though it of course updates everything to AD&D.

Because the Mystara Monstrous Compendium is such a comprehensive sourcebook, it also brings together some previously separated classes of critters, such as the living statues, the spider-kin, and the worms. (Yes, for some reason the Known World has tons of worms.)

Monsters of Note. This compilation is most notable for the deeply Mystaran creatures that it brings over to AD&D, among them the hutaakans of the Hollow World, the tentacular kopru, a variety of lizard-kin and spider-kin (the latter including the popular aranea), the lupin of the Savage Coast, pegataurs, the racoon-like phanaton, and the cat-like rakasta.

The Mystara Monstrous Compendium also includes several interesting typed creatures, most notably the unique drakes and crystalline dragons of Mystara - though the sapphire dragon was sadly misplaced. There are also some new inhabitants for the elemental planes, including Mystara's sentient answer to the quasi-elementals, which mix Law and Chaos with the standard elements, and a set of weaker elemental fundamentals.

The most infamous monster in this book is doubtless the decapus, which caused some problems in its original appearance in B3: "Palace of the Silver Princess" (1983).

Sadly, very few of the monsters from Mystara have influenced more recent editions of D&D. The bhut, the Neh-Tallgu brain collector, the choker, the frost salamander, the athach giant, the mud golem, the kopru, the nightshade, and the aranea spider-kin are the only monsters to appear in major Wizards of the Coast supplements for third edition. Several more iconic monsters like the lupin and the phanton showed up in Dragon or Dungeon magazine thanks to interest at Paizo.

About the Creators. This creatures in this book were originally created by a variety of authors over a 13-year period, then revamped and edited by freelancers and TSR staff alike. No doubt this overhaul was a major internal effort at Wizards!

About the Product Historian
The history of this product was researched and written by Shannon Appelcline, the author of Designers & Dragons - a history of the roleplaying industry told one company at a time. Please feel free to mail corrections, comments, and additions to shannon.appelcline@gmail.com.

Click here to go to the Mystara Monstrous Compendium on DriveThruRPG
Posted by James Mishler at 3:56 PM

Email ThisBlogThis!Share to TwitterShare to FacebookShare to Pinterest
Labels: Mystara