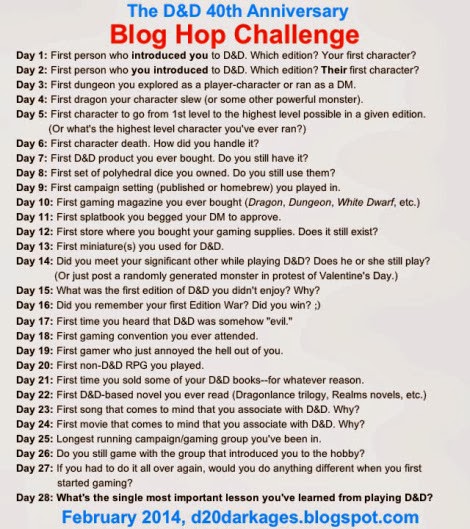 Q2: First person who you introduced to D&D? Which Edition? Their first character?

A2: This would include by brother John, our neighbors Rob and Ted (brothers), and our other neighbor Mark. Ted was my age, Rob and Mark were John's age. I introduced them to Moldvay; one might say I experimented on them, with Moldvay, as I was merely a few chapters ahead of them with the game. I've no idea what characters they created; I'm sure my brother made a fighter and Rob probably made a magic-user, though this is based on later general impressions of their gaming styles.

Rob and Ted stuck with gaming for some time after our first games; Mark dropped out entirely, while my brother wasn't interested unless it was Twilight 2000 or some other game that he could use a gun (like Top Secret).

A lot of these "firsts" are so very long ago, I only have general impressions of what was going on back then...

D10 Specials
1. This gelatinous cube is the size and shape of a hill giant, with the same locomotive ability. In the "head" is a giant-sized brain, the actual brain of a hill giant that was immune to the digestive abilities of the gelatinous cube, and now is the brain of the slimy thing. Thinking it is still a hill giant, the thing picks up opponents and drops them in its "mouth," there to be swallowed in one gulp and digested in the "torso" of the creature as per a normal cube.
2. This 2' square metal cube is covered in knobs and dials. When properly operated, it emits a ray that acts as a heal spell and restores 10 years of age as per a potion of longevity. However, the wielder must roll a saving throw versus Magic, with a +4 bonus if properly trained; of the save fails, the item is used improperly, and the wielder suffers the effects of a harm spell and ages 10 years. Use of the ray more than once every 28 days causes the user to suffer a -4 penalty to the save per time it is used beyond the first, cumulative.
3. This 18" long mechanical iron dragon construct is built around a scroll tube. The tube can be filled with scrolls or other items such as might fit in such a tube, and locked with a key. There are usually only two keys made for each such dragon; the lock is enchanted with a wizard lock spell that requires the use of the key to open. When so ordered, the dragon flies unerringly to the possessor of the other key at a rate of 480' (160'). It has an AC 0, 3 HD, 24 hp, and can bite once per round for 1d8 points of damage; it will not stay to fight if captured, doing all it can to escape and flee.
4. This living statue of obsidian is animated by a wraith; it thus possesses all the abilities of a crystal living statue and a wraith (including immunity to non-magical weapons). When it suffers half its total hit points, the obsidian shatters to pieces, freeing the wraith within.
5. A chicken in a dungeon? Yes, a chicken in a dungeon! But of course, it is a trap. If anyone eats the chicken, they must make a saving throw versus Polymorph or be polymorphed into a chicken after 1 turn (10 minutes).
6. The yawning carved mouth, complete with eyes and nose and ears, that leads into the corridor is normally quite unremarkable, but when an elf or half-elf passes beneath it, the large nose twitches and sneezes, exploding a gross amount of snot that acts as per a web spell centered under the nose of the face. The thunderous sneeze also has a 3 in 6 chance of attracting wandering monsters.
7. This needle trap is covered in a terrible poison; if the saving throw is failed, the victim, over a period of 1 turn (10 minutes) slowly grows ever more and more gassy, producing volumes of gas such that he cannot expel it nearly fast enough, causing his body to bloat up like a balloon... and at the end of the turn, he explodes like a fireball, dealing 6d6 points of damage to all in the normal fireball radius (as usual, save for half).
8. This velvet-lined box contains a 6" diameter crystal sphere, plus 1d6 smaller 3" diameter crystal spheres. The holder of the larger sphere can contact any holder of a smaller sphere and hold visual and verbal conversation at any distance, though a holder of a smaller sphere can only contact the holder of the larger sphere. When contact is trying to be established, the spheres blink a garish red and give off a small beeping sound, audible within 30 feet.
9. This ancient forge and anvil look like they were used yesterday, for no rust rests upon the anvil or tools, and the coals still burn bright. If an intelligent being is sacrificed by being cast into the fires of the forge, a  wraith-like figure rises up from the flames and takes up the hammer and tongs, awaiting orders. For each additional sacrifice beyond the first, the phantom smith can forge a magical power or ability into a sword or like weapon, chain or plate armor, or shield, though never any Lawful or Good abilities. Each +1 is one ability, an additional bonus versus a specific type of creature is another ability, and so forth. Each ability requires the sacrifice plus an hour of labor on the part of the phantom smith.
10. The holder of this small magical box can, with a successful bare-handed melee attack, attempt to take out the heart of a human, demi-human, or humanoid victim. The victim must make a save versus Magic; if the save fails, the holder rips out their heart, though they do not die. The heart is then placed in the box, and the one whose heart has been stolen is under the effect of a charm person spell. The holder of the heart can tell where the victim is and what they are thinking whenever the heart is held, and with concentration can mentally communicate with the victim at any distance. The holder of the heart can kill the victim any time by simply crushing the heart or otherwise destroying the heart. While he is missing his heart, the victim gains a +4 bonus to save against all mind-effecting spells cast by anyone other than the holder of the heart. The heart can later be placed back in the victim with no physical harm done. These boxes are usually found in groups of 1d6; there is a 1 in 6 chance per box that it already holds a heart.
Posted by James Mishler at 3:15 PM