[Mystara] Another Round of Q's Answered by Lawrence Schick

Lawrence Schick has been gracious enough to answer even more questions about the Original Known World that eventually became the world of Mystara.

1) Did you use Gods, Demigods & Heroes for the gods of the Original Known World or did you work out your own gods and pantheons. If you created your own, do you remember any details?

Tom and I adopted and adapted it, essentially rewriting the entire supplement to suit the OKW. It filled 17 typescript pages, all of which survive. We made a list of 100 deities (so one could roll randomly at need), mostly drawn from GDH, but we added a few we thought were unfairly overlooked. As you’ll see from the second page I attached, our standard rules for gods varied in some significant ways from the GDH standard.

Lawrence has been kind enough to send on the first two sheets from the list he and Tom Moldvay developed. As usual, click to embiggen: 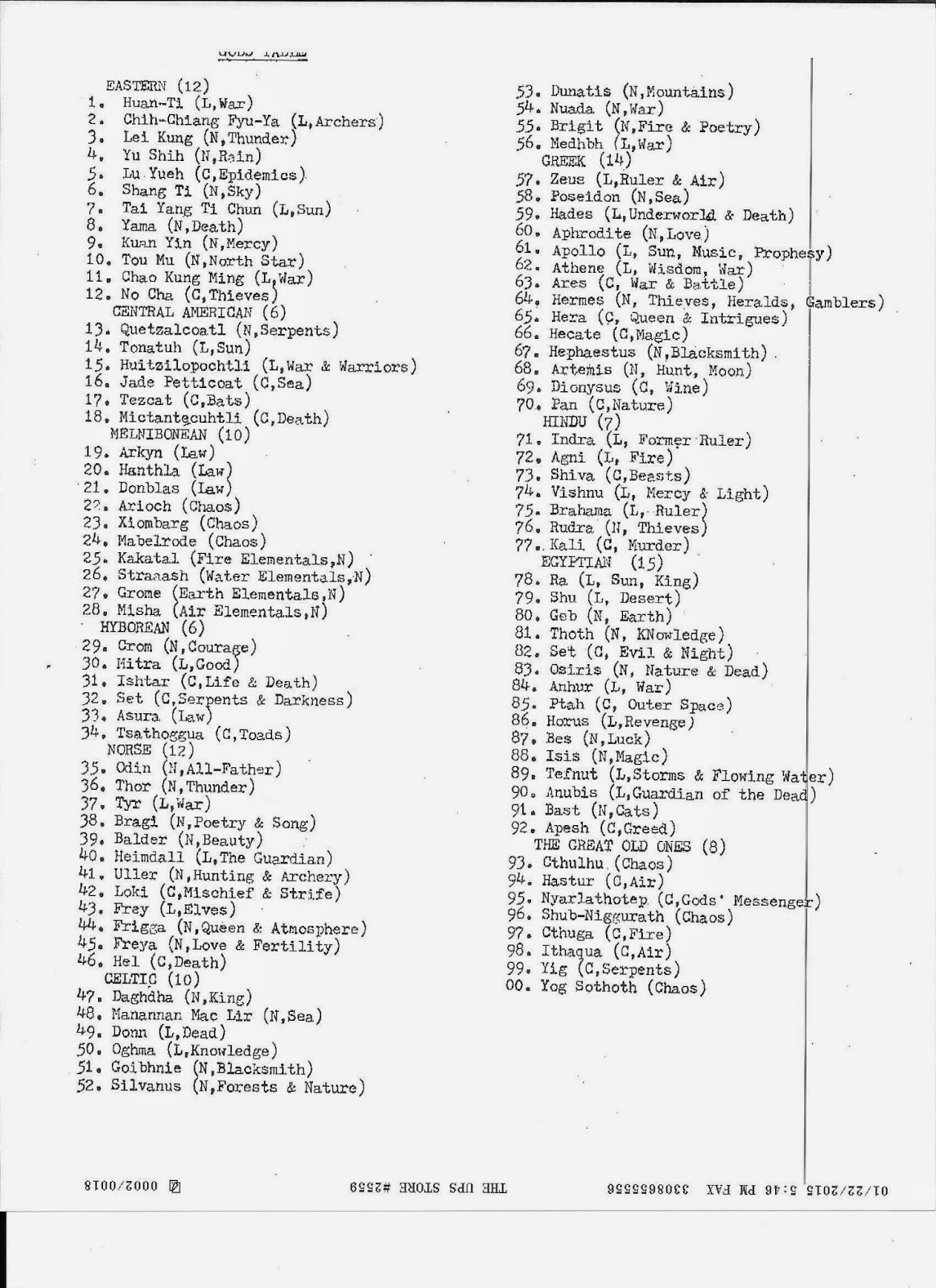 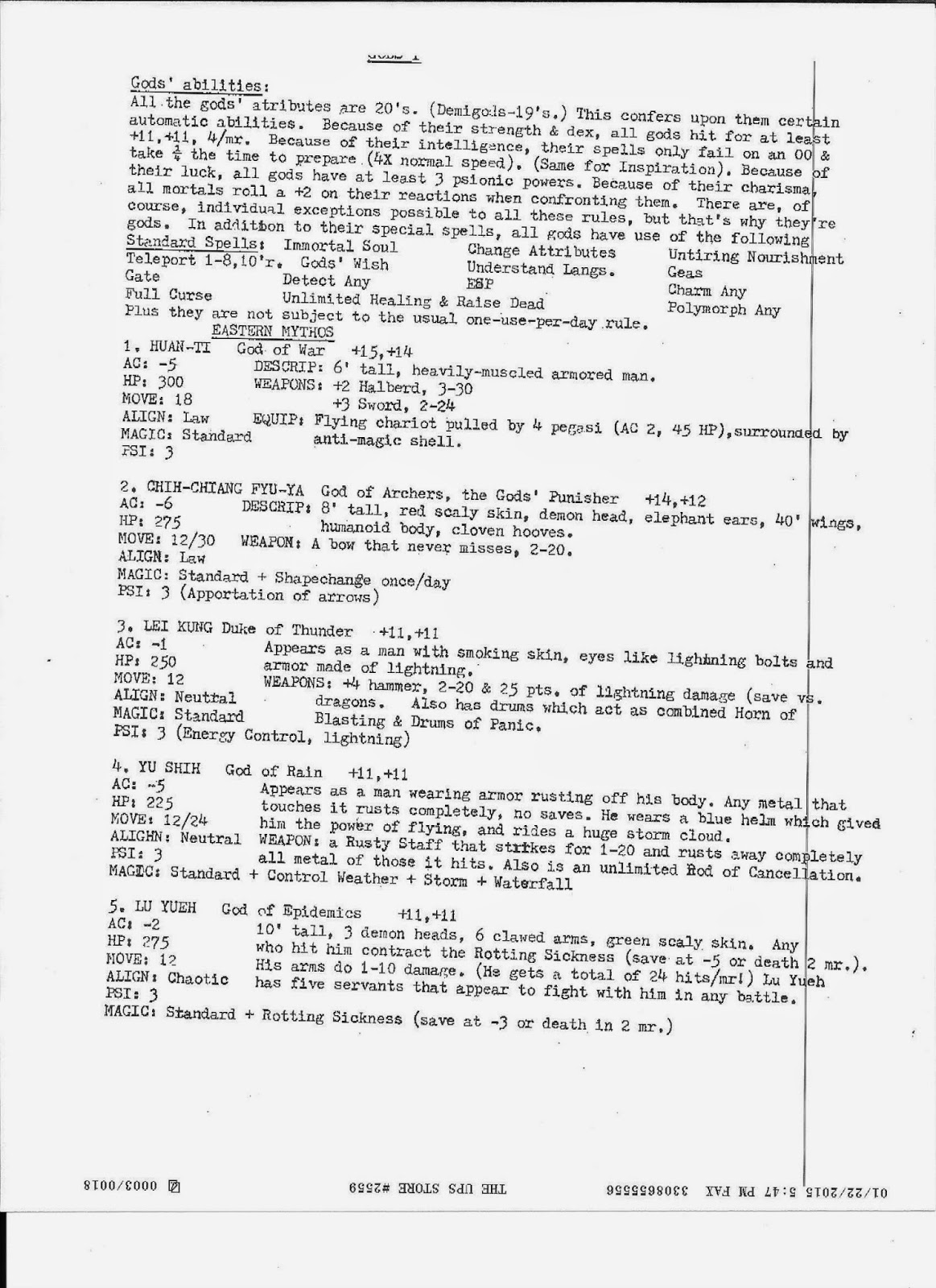 2) You mentioned an “ancient, pre-human civilization.” Do you recall any details about this? Related, do you recall if Tom Moldvay’s creation, the Carnifex of M3: Twilight Calling, were based on the Dragon Kings from Lin Carter’s Thongor series?

The pre-human civilizations were misty, with contradictory legends about them. Tom’s Carnifex were not based on Carter’s Dragon Kings, IIRC. (Neither of us thought very highly of the Thongor novels, though we admired Carter’s work as an editor.)

3) Where were the Mahars located? Related, based on module X1: Isle of Dread, I kind of assume that that was the “Lost Land” region. Were there other such regions?

One of the mountainous areas featured a “Valley of the Thunder Lizards” inspired by Burroughs’ Pellucidar that was ruled by the Mahars. To the best of my recollection this was in the mountains to the east of Darokin, at the headwaters of the Qeda River.

4) Here are my guesses for the cultures, based on the list from the “Languages” sheet and the list you included in the article on Black Gate: Thyatic: Greco-Roman Iasuli: Persia (and Arabs?) Gwynish: Welsh Heldann: Norse (and Balts?) Plirok: Aztec Xoph: Pharaonic Egypt Ethengar: Mongols Ethesti: Ottomans Here are the cultures I can’t quite figure out… Cezavy: Sounds like it should be Russo-Slavic, though such was not listed? Mnokkian: Turks or maybe Scyths, I would think… Glaini: The Dutch, descended from far-wandering Heldanns? Celok: Or are these the Balts? Not sure where the Han Chinese, the French, and the Mughals quite fit… maybe the Darokins are a mix of Heldann and Thyatic forming the Carolingian French?

Okay, let’s see if we can sort this out. The culture list in the Black Gate article was from memory, and doesn't give a one-to-one correspondence with the cultures that ended up in OKW. Here’s my best shot:

A) I have added a large area of plains between Sclavak and the forests of the Hagath. Does that seem right?

B) I have placed several different likely locations for the various Orc groups on the map. Are these appropriate? Were they that wide-spread?

They weren't as widespread as you show. Keep the Atruaghin Clans to the east and the Vanog Orcs to the east-central mountains.

C) Were the Malpheggi half-orcs? Similarly, were the Quastog half-elves or half-orcs or a mix of the three races?

The Malpheggi are piscine/human hybrids with the “Innsmouth Look” – there are subsurface colonies of Deep Ones (later brought into D&D as Kuo-Toa) in the Sea of Dread offshore from the Malpheggi Fens.

A note about the races in OKW: they’re much less hard-edged and distinct than in Middle-earth or World of Greyhawk. It’s better to think of them as tribes or ethnicities. All the breeds of humanoid mortals in OKW are inter-fertile, so wherever they’re adjacent there’s a fair amount of intermixing. If you self-identify as an elf, you’re an elf.

The Quastogs of Canolbarth Forest are a tribe suffering under a divine curse; I forget which deity they infuriated, but they were cursed such that most of their infants are stillborn. As a result the Quastog undertake grueling long-distance raids outside Canolbarth in order to abduct children—of any race. So the Quastog, originally Orcish, now look like anything and anybody.

(As an aside, the Quastog share the forest with the Canolbarth elves, but rarely interact with them; that tribe of elves specializes in misdirection magic, so a Quastog hunting party can walk right through an elven camp and not even notice it.)

D) Was there a White Plume Mountain near the city-state of Keraptis?

No, White Plume Mountain didn't exist until I decided to write a sample scenario to persuade TSR to hire me.

E) Were any other continents developed during the course of play?

No, this was plenty. Too much, even.

F) How many moons did the Original Known World have?

One: the Moon. It ruled the twisted lives of all lycanthropes.

G) Was it simply always known as "The Known World" even then, or did you have a different name for the setting?

We called it “The Known World.”

6) You mention that the Original Known World was used by several groups for many adventures between 1976 and 1979. Do you recall any stories or anecdotes from those adventures? Who were the other DMs, other than yourself and Tom Moldvay?

At this point, no, I can’t remember any names – only misty faces.

7) Trips to Mars and other weird realms were all the rage back in the day. Were such experienced by adventurers in the Original Known World?

It was more our practice to bring the aliens to the OKW, e.g., the Tharks.

8) Did you have any special house rules, such as different magic, different classes, multi-classing, critical hits, etc., that applied to the Original Known World?

We did: Tom and I tinkered with the OD&D rules quite a bit, and a few pages of that stuff has survived. I’ll just mention a few of our homebrew rules:

* We dumped all stat-modifications based on gender, e.g., female characters get -1 to strength (because smaller) and +1 to charisma (because cute). I mean, come on.
* We allowed multi-classing, and any race could play any class.
* We dumped racial level limits.
* We added a whole bunch of spells and monsters.

9) The influences from Howard, Lovecraft, and Smith are fairly obvious. But what, if any influence of Moorcock can be found in the Original Known World? Were the alignments of the OKW strongly in the Moorcock tradition?

We weren't all that big on alignment, actually—it seemed to us, even then, to be an oversimplification that was more restrictive than it was useful. Moorcock’s real influence on us was the example of his anti-heroes, which freed us up to put moral choices in the hands of the players, rather than hard-wiring the world into good vs. evil.

10) Where were your personal campaigns based in the Original Known World?

Both Tom and I ran campaigns based in the Republic of Darokin—that enabled players to advance characters in both campaigns simultaneously. Adventures tended to take the characters west into the lands around Lake Amsorak and the Shallow Sea.

When those characters showed up in our campaigns, they were always travelers who had come to the OKW from their world at the behest of some deity or mighty wizard. When their story in the OKW was finished, they usually returned to where they came from.

12) That said, were the cultures of the Original Known World their own, or were the original founders of these realms travelers from our world? In other words, was the Original Known World a parallel dimension/world or was it derived and descended, literally, from travelers from Earth? I’m sure more questions will arise from the answers from this round…

The OKW was its own place. For the sake of player familiarity it was designed to evoke cultures from our own history, but it stood on its own.

And here is the most recent iteration of the full-color Original Known World map. I am considering doing another version that adds the Real World cultural names of each nation... though that would make it a bit crowded... let me know if that might be valuable.