[Mystara] Final Round of Q's Answered by Lawrence Schick

Lawrence Schick has been kind enough to answer one last round of questions on the Original Known World -- this time about his and Tom Moldvay's original campaign style as Dungeon Masters of the first campaigns set in the Original Known World. Though this is the last we will hear from him on this for the time being, I am sure he will be back with more fascinating information and insights when his schedule allows...

For more background, check out the earlier rounds of questions:

[Mystara] Another Round of Q's Answered by Lawrence Schick

How lethal were your campaigns? Were you more into the narrative of the story, or into random adventure? What was your style like as a DM?

These things evolved over time; I think they followed an arc similar to that of many mid-1970s campaigns. At first we allowed players to play multiple characters at a time, as well as henchmen and hirelings, so a group going into a dungeon could be very large, maybe two dozen characters. So we WERE lethal: life was cheap, and rarely was a dead low-level character deemed worthwhile of the expense of a “Raise Dead.” But at first, the characters weren't much more than collections of stats, so it seemed appropriate.

Over time, as characters acquired history, personality, and nuance, and the game world gradually fleshed out, storytelling became more important. Combat and problem-solving were still supreme, but we began to take more care in setting the scene, in role-playing NPCs, in setting up situations where player characters, played well, could shine and make memories. We were beginning to try to use the tools of the game rules to evoke the kind of fantasy stories we loved.

Did you use prepared adventures, or were your adventures more along the lines of off the cuff sandbox runs?

Neither: both Tom and I carefully mapped out and prepared our adventures in advance. Not that we weren't willing to ad lib and extemporize, but it was always in the context of a prepared situation. I remember the first time someone brought G1: Steading of the Hill Giant Chief to one of our sessions. We looked at it in wonder. Really? Buy somebody else’s adventure? And at $5.00 for eight pages and a map folder? Madness. Clearly, that sort of thing would never be popular.

What kind of preparations did you make for each session?

Speaking for myself, I spent many hours planning things out. (Remember, I was a college student, and had the hours to spare.) I drew maps, statted out monsters and items, and created NPCs. As time went on, and the role-playing moved to the fore, the latter task grew in importance.

How many players were there per group? Did you allow multiple characters per player?

The number of players varied from one to eight. As I said, at first we allowed players to run two, three, or even four PCs at the same time. As certain PCs grew to prominence, the others sloughed away, until eventually we were down to one player, one character.

Did you use henchmen and hirelings, and if so, how were they treated by the player characters?

At first they were just unthinking meat-shields; eventually, they started growing personalities, and we made the players spend more time and effort managing them. Once the players were betrayed by their own hirelings a time or two, they became much more careful about who they picked to join them.

Did you focus on dungeons, wilderness, or cities, or a mix?

Were you more historically minded or did you allow for anachronisms?

As you’re well aware, the early days of D&D were pretty wide open. We didn't allow for anachronisms so much as wild crossovers of various fantasy genres. We delighted in confounding the players by throwing in creatures or characters that were completely unprecedented from previous adventures. Once they’d learned how to slay dragons, why keep sending them after dragons?

Were you serious or wahoo?

We were seriously wahoo.

What kind of mix of monsters, traps, and “specials” did you use in your adventures?

That varied a great deal: our dungeons tended to be themed, so it depended what kind of dungeon we’d lured the players into.

How did your literary influences work with your actual game play and campaign development?

That was where the aforementioned themed dungeons came into play: we would try to craft adventures that evoked the work of specific authors or sub-genres of fantasy. I still remember Tom’s first Lovecraftian dungeon. Horrific! At one point we just turned tail and ran for it.

What were your NPCs like? Did you work out a background for each, a full sheet of description, perhaps an index card, or were they just a name and line or two of text?

It depended on the importance of the NPC. We were wary of creating characters that would steal the PCs’ thunder, so I don’t think we ever went as far as a full sheet of description—at least, not until “Giants in the Earth.”

One thing Tom and I discussed more and more as our campaigns evolved was the collaborative nature emerging from RPGs. The more we got into storytelling, the more we noted that the game story wasn't complete without the contributions of the players. We spent more time thinking about how to draw them in, get them invested, make them actors rather than reactors. These were lessons I carried with me to TSR, and on after that into video and computer game design.

Replica map of the Known World from module X1. Cartography by Thorfinn Tait. 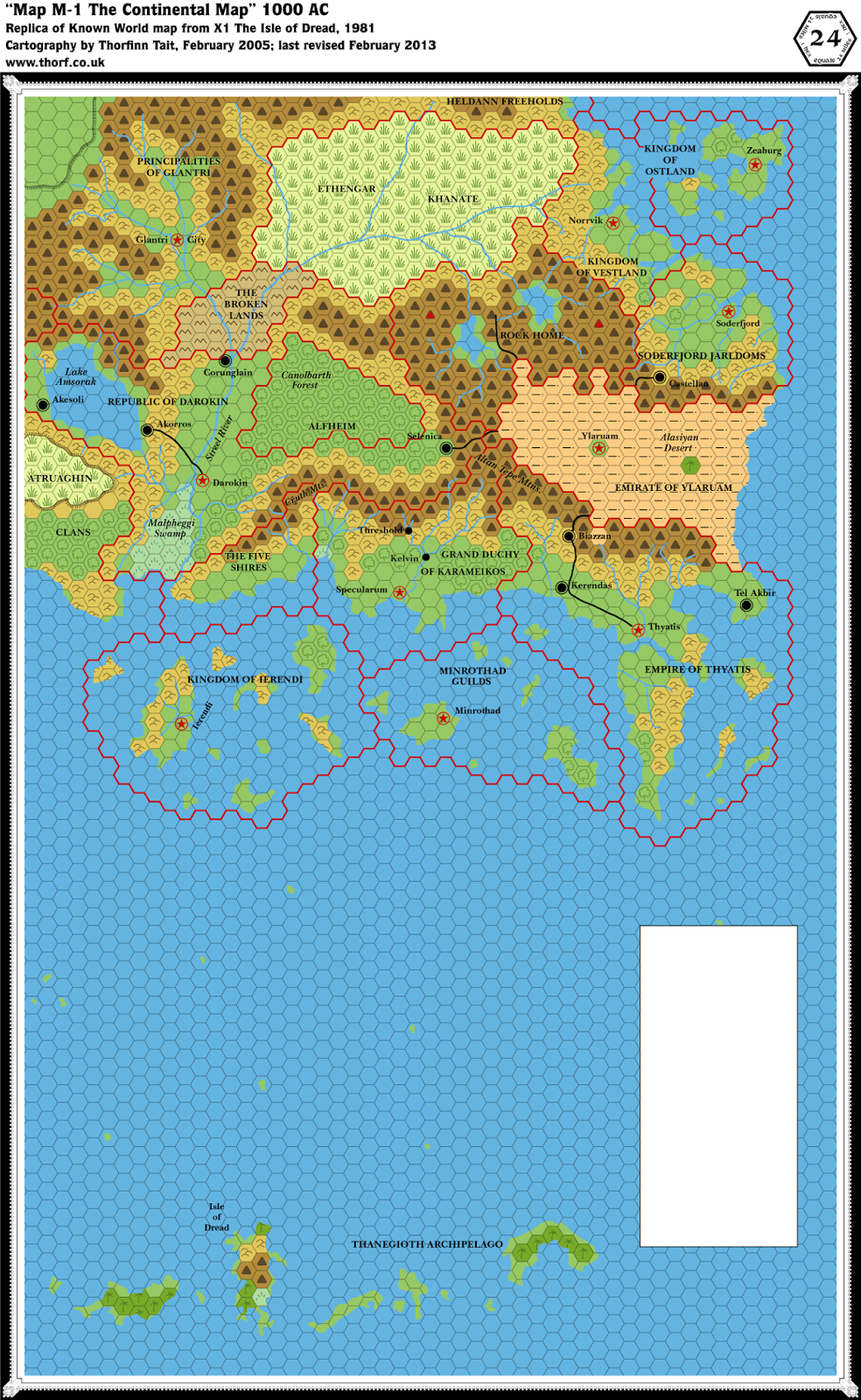 Posted by James Mishler at 1:19 AM