The Dungeons & Dragons 5E campaign is ostensibly set in the Magic world of Dominaria (though its never really made any serious difference and ended up being little more than window dressing).

Started out as a classic “go to the dungeon and back by end of session game” but devolved from there. Was running once a week, now every other week.

Current stock of regular players includes a Human Scout, Shadar-Kai Assassin, Human Paladin of Vengeance, Kobold Wizard, Dwarf Cleric of Arcana, and an Elf Monk; formerly included a Halfling Champion, Warforged Druid, Half-Elf Cleric of Life, and a Human Cleric of War. Average level is around high 3rd to low 4th level, ranging from 2nd to 6th. No one has died yet.

Started out as part of effort to re-conquer Lost Oneah, a realm generally Hindu in style and culture; the greater political game was quickly abandoned for quicker cash rewards, and efforts have included rescuing colonists (went well enough), rescuing a princess (went very poorly), capturing pirates (wildly successful), and now tooling around the ocean hunting more pirates (but instead encountering lost temples filled with Sahuagin and a ruined school  of magic).

So far the game is still usually fun; we shall see how it goes once the party starts to hit those mid-levels, where in my experience the game really begins the break down.

The Advanced Labyrinth Lord campaign has had rotating Labyrinth Lords and even various campaign settings (this is the campaign that was, for a while, set in the Modron area, but now is far off somewhere else, the setting has always been sort of nebulous).

The characters include Elf #1, Dwarf Fighter, Human Monk, Human Cleric of Mitra, Elf #2, and a Half-Orc Fighter. The Elf #1 and the Dwarf each have war-dogs (which are positively lethal and totally worth the XP cost). Levels range from 2nd to 4th.

I’m back in the rotation as LL, and this time up I decided to run Castle Xyntillan (read my review here).

The first session was last Wednesday; we play every other week.

SPOILERS FOR CASTLE XYNTILLAN BELOW!!! 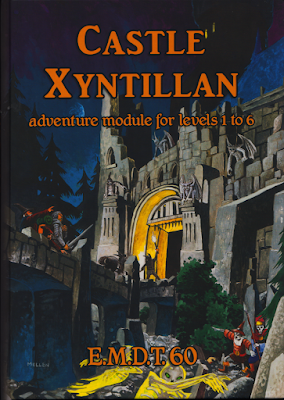 Here’s the general rundown of the session:

Session starts with the characters in Tours-en-Savoy. They are en route to the warmer southern lands to enjoy the loot they gained on their last adventure (a substantial treasure, such that they could retire should they so choose). However, a few of the poorer members of the group heard rumors about Castle Xyntillan and the wealth to be found there and convinced some of the others to join them in searching for the wealth said to be hidden within. [My characters, a Halfling Thief and a Human Cleric of Mitra, remained behind to guard the banked wealth of the group and look out for their interests in the event of disaster].

En route from Tours-en-Savoy to Castle Xyntillan they encountered their first Malevol – Gilbert Malevol the Fox and his pack of bandits. After some negotiation (and realizing they had left too much of their treasure back in the town), they finally got him to accept 10 gp in “tax” per person. He wished them well and invited them to visit again on the way back, “should they survive that stinking ruined pile” they were determined to explore.

This is the group that decided, when exploring the Caves of Chaos, to forgo exploring the first caves and shot right for the last; they remained true to their style in this adventure, as well… and after scouting out the castle and consulting the map they had found (I printed out the player’s map available from the website), they decided to approach the castle from the rear!

They walked along the rocks at the base of the castle along the lake shore, until they came to a point beneath the chapel where there were no more rocks… and only a cavern tunnel that went deep under the castle. The monk swam to the boat tied at the quay, and brought it back, and so everyone rowed to the quay and thence up the stairs to the garden.

There, while investigating the statue of the Lady, they were attacked by three goatrices (goat-headed cockatrices) – the first time this crew had been truly frightened since their encounter with the medusa in the Chapel of Evil Chaos in the Caves of Chaos. However, they handily defeated two of the creatures, and the third fled into the brush, to bleat at them angrily.

They found that the statue could be moved side to reveal a pit with a ladder going down. Down they went, of course, carefully with lots of rope, which was good, because below the pit was bottomless (if covered by a rusting grate).

They attained the room of the pit, then went exploring the tunnels down the single corridor. They found a long corridor filled with doors. The first one they opened revealed a room with a coffin on a bier, gargoyles in the four corners, and bats coating the ceiling.

“Oh, hell no!” they cried, not at all interested in battling what was obviously a vampire; they quickly closed the door and decided to head back up the ladder to investigate the chapel, which had given the cleric of Mitra a “good feeling.”

They remained unmolested in the garden (bleating from the surviving goatrice from the brush notwithstanding), and quickly made their way to and into the chapel, which I described as magically lit in a bright, cheery light. They noted a font of holy water for later use and saw the pure white shroud on the altar (“A trap?” they ask; “I shall pray on it,” said the cleric).

While he prayed on the matter, the others went up the stairs to investigate the second level.

There they found first a room once used as a sleeping chamber for the priest and acolytes (the “otherwise un-described “mass of rats,” which I forwent in favor of a more dangerous study). Finding only 17 cp in an old wardrobe, they tried the other room, which unlike the chapel and the dormitory was not magically lit…

With the lantern light, they saw a desk with chair, some old shelve with moldy books, a lectern with a black book, and a pentagram circle made with silver shavings. Fortunately for them, the potential occupant was not to be found…

Elf #2 found nothing of any value on the table, save perhaps to astrologers or madmen;

The dwarf nearly got eaten by the rot grub in the rotting books on the shelves;

The monk determined the black book was seriously bad juju;

They discovered that there was something still in the pentagram circle when the monk passed his glaive over it.

The monk went down to get the cleric’s silver-shod staff to test out a theory; Elf #2 took the opportunity to grab the black book, of which he had been warned, and threw it in his loot sack.

The monk returned, noticed the book was missing, and briefly confronted the Elf, but decided it wasn’t worth the trouble.

He then passed the silver-shod staff over the pentagram circle area, which resulted in a horrible demonic howl, the appearance of a ghostly figure of a great horned and winged demon in the circle, and the brief dimming of the magical light below.

The party was still stunned and contemplating what it all meant when the cleric appeared from below and shouted, “What in the Nine Hells is going on up here?”

They told him everything, and when he heard of the book, had Elf #2 show it to him.

It was revealed to be a Libram of Heinous Damnation, which upon hearing that, the Elf dropped it on the ground, and the cleric started considering what to do with the terrible artifact of Evil and Chaos.

This is when Elf #1, remembering the efficacy of holy water in previous encounters with Evil and Chaos, decided to splash a whole vial on the book, just to see what happened.

The book disappeared in an explosion of fire and sulfur, and a hideous glowing crack appeared in the space on the floor where it had been. A large, long, black, scaled, clawed arm reached out and grabbed at Elf #2, who had been the only one to touch the book.

A general melee ensued, as everyone tried to save Elf #2 from being dragged to Hell!

After a few scares, the cleric finally touched the arm with his holy symbol, there was another horrific demonic scream, the arm withdrew, and the crack in space shut with a snap.

The cleric then filled the group in on what the item was, and when he revealed that it could have been worth upwards of 15,000 gp "for the inset gems alone," Elf #2 fell to his feet and let out the loudest scream of all…

And that was where we ended the session.
Posted by James Mishler at 12:21 AM