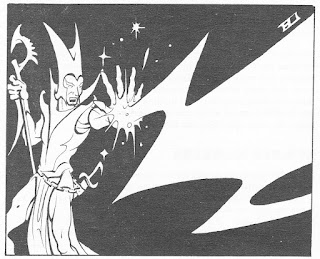 Magic-users, through study and practice and deals with eldritch beings, have learned to cast arcane spells and use arcane magic. Merlin the Magician was a famous magic-user of legend; similar characters from literature include Pug from the book Magician, Belgarath and Polgara from the Belgariad, Rhialto the Marvelous from the Dying Earth stories, and Gandalf from the Lord of the Rings.

Hit Dice: Magic-users use four-sided dice (d4) to determine hit points. Magic-users gain one hit die per level up to and including 9th level. One hit point is gained per level after 9th, with Constitution modifiers no longer applicable

Proficient Weapons: A magic-user is proficient in the use of the club, dagger, dart, staff, and one other weapon chosen at 1st level. The character may only choose from the following weapons: hand axe, light crossbow, light hammer, mace, scimitar, shortbow, sling, spear, long sword, and short sword.
Non-Proficiency Penalty: -5

Arcane Focus: Magic-users possess a personal arcane focus – a rod, staff, or wand – that is used in the casting of all spells. If the magic-user does not have his focus held in hand he cannot cast his spells. A magic-user can try to use another magic-user’s arcane focus, but this requires a Spell Failure roll of 30%, and he cannot use the mage-dart ability of the other caster’s focus.

If the magic-user’s arcane focus is lost or destroyed, he cannot cast spells until he creates a new one. A temporary arcane focus can be enchanted with one hour of work per level of the caster; this temporary focus cannot cast mage-darts, and can only cast a number of spells equal to the caster’s level before it burns out and is useless. A magic-user must spend one day and 100 gp per level to enchant a new permanent personal arcane focus. At 9th level a magic-user can make a more substantial arcane focus, such as a ring or an amulet, which must still be worn and displayed prominently.

Arcane Spell Casting: A magic-user knows the arcane spells that are contained in his spell book. From these spells he may memorize the number of spells listed below, plus a number of bonus spells based on his Intelligence score. 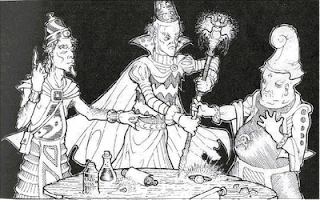 The magic-user also has a number of Spell Points equal to his level plus a bonus based on his Intelligence score. A spell costs 1 Spell Point to cast per level of the spell (1 SP for a 1st level spell, 2 SP for a 2nd level spell, and so forth).

Casting a spell does not cause the caster lose it from his memory; the act of casting the spell is separate and distinct from the memorization of the spell. However, even if the caster knows a spell and it is in his spell book, he cannot cast it unless he has it memorized!

Learning New Spells: A magic-user begins play with detect magic, read magic, magic missile, shield, and one random spell in his spell book, plus perhaps one to three random bonus 1st level spells based on Intelligence (roll on table below, re-rolling duplicates). Every level he learns one new spell of a level that he can cast for free through assumed spell research; this requires one week of time in research (at no cost) per level of the spell. The spells that may be chosen for free are from a much shorter list than the entire list of spells from each level, as many spells are esoteric and difficult to find. A magic-user can also add spells to his spell book by finding them in scrolls or other spell books or through research into existing or wholly-new spells. The Judge will provide details on these procedures as they come up. 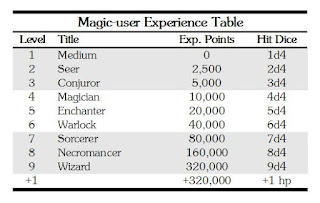 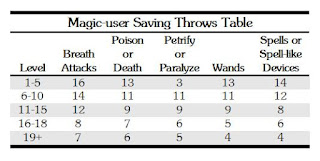 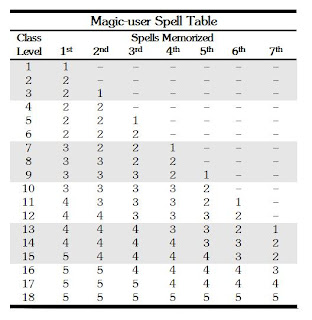 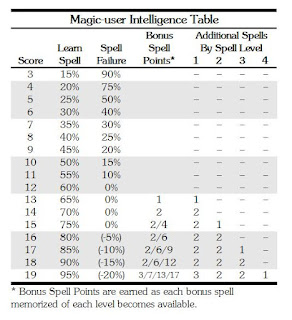 1st Level Magic-user Spells
A magic-user memorizes the standard spell and may chose to cast the reversed form of the spell if needful at no additional cost. Some spells are noted as being “Evil.” Use of these spells is usually regarded by authorities as a criminal act, and can be readily mistaken as sorcery by the uninitiated. Additionally, use of Evil spells often attracts the attention of demons and devils, who may seek out the magic-user and make tempting offers of magical power and eldritch knowledge… 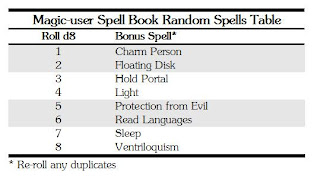 Floating Disk: If the caster concentrates, he can move the disk by 5’ per round in any direction, including up and down. However, should the caster lose concentration, the disk immediately flies back to his side at a rate of 240’ per round.

Hold Portal: Powerful magical creatures, such as dragons, demons, lycanthropes, and vampires, have a 2 in 6 chance per round of bursting through a held portal.
Open Portal: For the next 2 turns the caster can open any unlocked portal (including doors, windows, chests, etc.) within 10’, one per round, up to a total number of portals equal to the caster’s level plus 1d6. When using this effect on doors that are stuck due to damage or age the caster must make an Intelligence check as a though he were breaking down the door.

Light: The caster may choose the color of the light. If the spell is cast on a worked gemstone, the effect lasts for one hour per gold piece value of the gem; when the spell ends, the gem shatters to dust.
Darkness: Changes as per above. 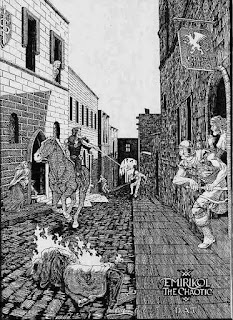 Magic Missile [Sometimes Evil]: The magic-user gains additional missiles more rapidly: one at 1st level, two at 3rd level, three at 5th level, four at 7th level, five at 9th level, six at 12th level, and seven at 15th level.
Counter-Missile: If the magic-user or an ally within 150’ is subject to attack by magic missiles, he may attempt to cast this spell to intercept the missiles. For each missile countered the damage dice are rolled in opposition; if the original missile’s damage exceeds that of the counter-missile, the missile gets through and hits its target. Otherwise the missile is countered with no damage dealt.

Protection from Evil: Note that any sort of attack against a summoned creature drops the ward against all summoned creatures! The spell can be cast by touch on a willing target.
Evil Eye [Evil]: This reverse version of the spell causes the target to suffer a +1 penalty to AC and a -1 penalty to saving throws for 12 turns. During this time the target attracts any summoned creatures within 240’, being lit up like a beacon for any sort of extra-planar being. The target, which must be within 30’ and make eye contact with the magic-user, gets a saving throw versus Spells to negate the spell.

Read Languages: Once the caster has read an item using this spell, he can always read that same item again, though it provides him no ability to read any other item in the same language. The spell can be cast by touch on a willing target.
Indecipherable Script: Casting this spell upon an object renders the writing into gibberish, completely indecipherable save through use of a read languages spell, for 1d3 days per level of the caster.

Read Magic: The spell allows the caster to read one page of magical writings per minute (6 rounds). As a spell takes up two pages per spell level in a book, the caster can read up to 5 levels of spells from a spell book per casting of this spell. As scrolls are more compact, a caster can read one spell on a scroll per minute. If a spell is not completely read, the caster still gets the general gist of it. One cannot simply “peruse the index” or glance at each page, each page must be thoroughly read.

Shield: This spell can be cast instantly, out of turn and as the caster is being attacked, if the caster makes a saving throw versus Spells. If the caster was surprised the saving throw is at a penalty of -4. If the save fails, the spell fails and the Spell Point is lost. The spell can be cast by touch on a willing target.
Hex [Evil]: This reverse of the shield spell causes a single target to suffer a penalty of +4 to Armor Class against all opponents. The target gets a saving throw against spells to negate the spell. The hex spell has a range of 30’ and lasts for two turns.

Sleep [Often Evil]: Targets of fewer levels/hit dice than the caster have no saving throw against this spell; those with equal or greater levels/hit dice may make a saving throw against Spells. If the save is successful, they are merely sleepy rather than asleep, and suffer a -2 penalty to hit and to saving throws and move one speed rank slower until they are hit in combat. The area of effect is a 30’ diameter circle, within which the spell can affect both friend and foe, affecting those of lowest hit dice first.
Wakefulness: The reverse of sleep can be used on a single willing target. The target cannot naturally fall asleep during the next eight hours, and gains a +4 bonus to his saving throw if a sleep spell is cast upon him (he always gets a save, even if he is of a lower level than the caster).

Ventriloquism: Note that the caster’s mouth does not move at all when he uses the effect of this spell; he could even speak normally while the thrown voice speaks some other words at the same time.
Posted by James Mishler at 9:52 PM