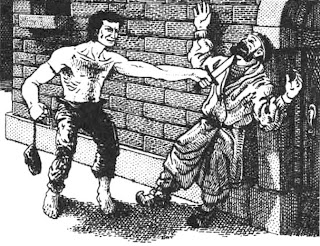 Thieves are trained in the art of stealing and sneaking. They have superior ability to open locks, find and remove traps, and other esoteric skills. Due to these abilities, a thief is often found among a group of adventurers. As their name indicates, however, they do steal – sometimes from fellow party members! Notable thieves from literature include Bilbo Baggins from The Hobbit, Cugel the Clever from the Dying Earth, and the Gray Mouser from Nehwon.

Hit Dice: Thieves use six-sided dice (d6) to determine hit points. Thieves gain one hit die per level up to and including 9th level. Two hit points are gained per level after 9th, with Constitution modifiers no longer applicable

Armor: Thieves may wear any armor, but if they wear armor other than padded or leather, they suffer severe penalties to the use of their thieving abilities. They may use a shield, but cannot climb walls at all when using one.

Thieving Abilities
Thieves have the following range of skills, which improve as the thief gains levels. See the Thief Skills Table. Note that usually the Judge will make rolls for these abilities, because a thief is not always aware when he has failed! Note that there is always at least a 1% chance of failure, even if the final percentage is above 100%.

Backstab: A thief has the ability to backstab with any weapon with which he is proficient. He must catch an opponent unaware of his presence, using move silently and hide in shadows alternately as needful. To backstab with a missile weapon he must be within half of the short range of the weapon (rounded down). The successful sneak thief receives an attack bonus of +4 to hit and deals maximum damage as per a single weapon die plus a roll of the weapon damage die, plus his normal bonuses or penalties. For example, with a dagger, he would deal 4 points of damage plus a roll of 1d4, plus any of his normal bonuses or penalties. This damage modifier increases to double maximum plus roll at 5th level, triple maximum plus roll at 9th level, and quadruple maximum plus roll at 13th level.

If the thief successfully gained surprise on the opponent, he may choose to hold his attack to talk or negotiate with the target while “having the draw” on him. If the target seeks to run, jump, attack, or otherwise avoid the attack, the two must roll individual initiative. If the thief wins, he still gets his backstab attack; otherwise, the opponent has initiative and the backstab opportunity is lost.

A climb walls check must be made every round of movement, whether horizontal or vertical. If the thief falls, he falls from his previous height plus d% of the distance he was attempting to climb. If using ropes and pitons the thief must make a saving throw versus Death for the first piton, at -2 if lightly encumbered, -4 if moderately encumbered, and -8 if heavily encumbered. Each piton must make a saving throw if the previous one failed; if all pitons fail, the thief falls. It takes 1d6+4 rounds to pound in a piton; each piton used necessitates its own wandering monsters check. 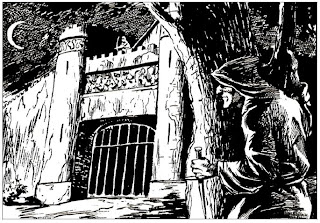 Find and Remove Traps: Note that these are separate skills, for a thief must find a trap before he can remove it! Time for each function is as per opening locks, below. Unlike opening locks, the thief can only try to find and remove a trap once!

Hear Noise: Thieves can attempt to listen for noises, in a cave or hallway, and at a door or other locations but the thief and his companions must be quiet and in a quiet environment. The thief cannot wear a helmet or other headgear when he attempts to hear noise; note that padded and leather armors come with a coif or padded hat for protection of the head!

Hide in Shadows: A thief always thinks he is successful in this skill, and will not know otherwise until others react to his presence. He must remain motionless when hiding, and cannot dive into shadows while being observed! And of course, it must be mentioned that there must be shadows or darkness to hide in for this skill to have any chance to work.

Move Silently: When successful, others will not hear the movements of a thief. However, the thief always thinks he is successful in this skill, and will not know otherwise unless others react to his presence. Movement rate is half normal walking speed – one cannot jog or run and move silently! Flooring quality and covering can halve or even quarter the move silently ability chance. A thief’s move silently ability is halved if he is moderately or heavily encumbered.

Open Locks: A thief is skilled in picking locks, but needs lock picks to do so. Picking a lock requires 1d10 rounds, perhaps more depending on the complexity of the lock. A thief may retry an open locks check if he fails, but each time he tries again his base chance to pick the lock is halved (rounded down) after modification based on complexity, and the time required is doubled for each time retried.

Pick Pockets: This skill is the bread and butter of non-adventuring thieves, for it is a quick source of income… but not without peril. The thief suffers a penalty of 5% for each level the intended victim is above 3rd level. A roll that is 20% or more above the final skill percentage means the intended target notices the thieving attempt. The Judge then determines the intended victim’s reaction…

Read Languages: A thief can attempt to read languages, ciphers, and codes, provided the language is one that he has reasonably had the potential to encounter at some time prior. This ability does not include magical writings. If the roll does not succeed, the thief may not try to read that particular piece of writing until he reaches a higher level of experience.

Use Magic Items: A thief can attempt to read and cast spells from magic-user scrolls and use magic items normally restricted for use to other classes. His chance of accuracy is based on his Intelligence score, as per a magic-user’s chance to learn a new spell. He suffers a penalty of 10% to this roll for every level he has less than the required level to cast the spell (or equivalent). A failed roll means the spell or item does not function as expected, and can potentially create a horrible effect at the Judge’s discretion (almost certainly if the roll is within the upper 10% of potential failure rate). 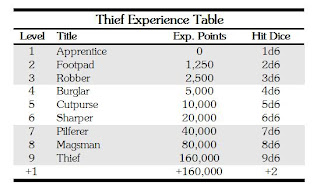 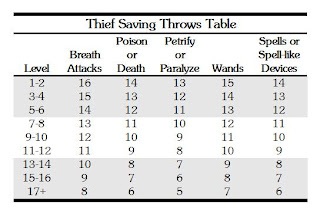 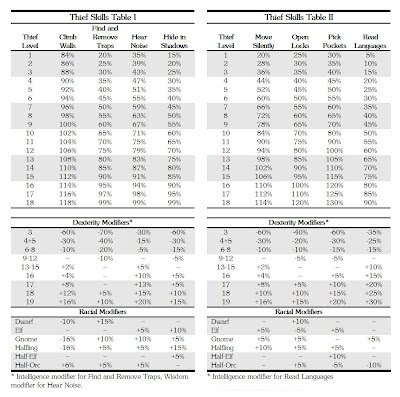