I went to grad school at the University of Iowa in Iowa City, Iowa from 1992 to 1994. While there I ran numerous campaigns with many gaming groups. One of these campaign was the Yceea Gamma World Campaign. This Gamma World setting had several influences. The two most prominent were from television and literature.

As one can see, the Buck Rogers in the 25th Century TV series had a major influence, from the inclusion of a "New Chicago" arcology/mega-city in central Illinois. New Chicago, along with a dozen or more similar locations, were built by the Starmen, the Pure Strain Humans who arrived from interstellar colonies and re-colonized the irradiated Earth. The Starmen were the source of all Pure Strain Humans in this campaign, as all native humans were Mutants. PSH had spread throughout the lands, as the Starmen arrived centuries ago, had a civil war, and those who wished to live free from the kind but stifling benevolent tyranny of the City-State settled their own lands.

The other influence were novels by three authors: Donald Moffat with Crescent in the Sky and A Gathering of Stars; the excellent Budayeen Cycle by George Alec Effinger; and of course, the Horseclans series by Robert Adams, notably mentions of the Khaleefate of Zahrtogah. And so most of the Earth, or at least, the campaign area, was dominated by a vaguely Islamic-style culture, with Ahmeers and Sooltahns, Mahleeks and Khaleefs; as with the Khaleefate of Zahrtogah, rulership was usually held by those with the most potent mental mutations...

I haven't yet found any of my notes from the campaign, just this map. I hope something printed remains; all my notes were on the first computer I ever owned, complete with a dot matrix printer. I think I might have even typed up some notes on a typewriter I still owned. But almost 25 years later, it is unlikely that much else remains. I might just rebuild it from the ground up for a Mutant Future or Mutants & Mazes campaign...

Scale is 8 kilometers per hex, or about 5 miles per hex. 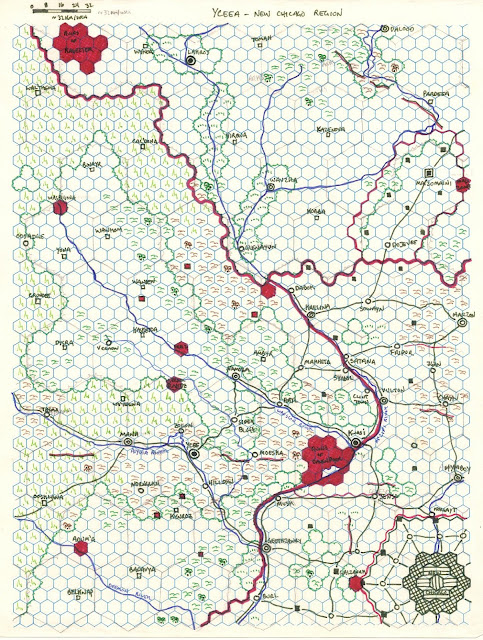