So I've finally gotten a chance to go through some of those boxes of long-stored gaming materials. I've found a trove of old maps and campaign notes, stuff I wrote ages ago that, if they exist in digital form anywhere, it is likely they are rotting on an old 5 1/4" or 3 1/2" disks in a box somewhere in the back of storage... so I'll eventually sort out what is cool and not, scan it, OCR it, and maybe do something with it... we'll see.

But for now, the maps. I used to hand draw TONS of maps back in the day, all sorts of maps from dungeons and wilderness to cities and villages. Now I pretty much doodle on Hexographer for hex maps and use existing maps from elsewhere for dungeon and city maps.

This map was my first go at a version of Taymor, the lands of the Known World of Mystara back before the disaster that created the Broken Lands and destroyed the Kingdom of Taymor. I wrote up a TON of backstory on Taymor when I was running Mystara on a regular basis. Most of that can be found on the Vaults of Pandius; at least, that which I posted to various Mystara fan sites. There's a ton of stuff still remaining that I might get to eventually...

This map is of course at the 24-mile-per-hex scale that was used in the Known World series. 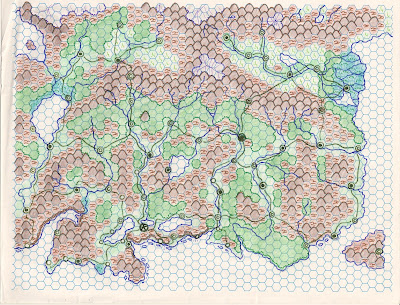