Here is some detail on the Middle-Southlands Map:

LOCATIONS
0114 LOST CITY: This is the location of the Lost City presented in module B4: The Lost City. 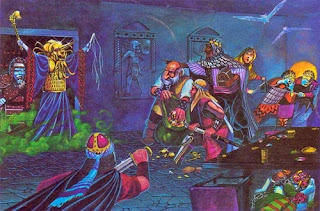 0118 GOBLIN-TOWN: This large town (pop. 9,936, 2,484 able-bodied) is home to goblinoids – 40% goblin-bloods, 30% goblins, 15% hobgoblins, and 10% bugbears – the 5% balance being humans, gray dwarves, dark elves, dread halflings, orcs, orc-bloods, gnolls, ogres, and trolls, plus many packs of dire wolves. The town stands at the heart of a vast, ever-shifting labyrinth, deadly and eldritch in nature. The goblins are led by the Goblin-King, Jareth (Chaotic male 10th-level Elf), who can control the labyrinth at a whim. Jareth serves the Witch-King (Hex 0618) and provides him with goblins and materiel for his wars; he is not a Melkor cultist as he prefers his Chaos pure. The forges of the goblin-smiths of Goblin-Town provide armor, weapons, siege engines, fireworks, and explosives for their own armies and as trade fodder for the other settlements of Goblinland – sometimes they even function as designed!

0205 LION CASTLE: The is the location of the Lion Castle presented in module BSOLO: Lion Castle.

0207 EOMERINGS CAMP: This camp of nomads (pop. 880, 220 able-bodied warriors) is the “capital” of the Eomerings – a tribe of the Rohirrim nomads from the northwest who, in the last two generations, extirpated the goblin nomads of the Plains of Calenardhon  and took them for their own. The Eomerings are descended from the warriors who chose to follow Eomer the Mighty upon the corruption of their previous king, Theoden, three generations ago. Though cousins with the Eowyngs (Hex 0303), they constantly feud with members of that tribe, as they do not believe that women are worthy of being warriors, nor leading a tribe. The current leader is King Theodred (Neutral male Rohirrim human 10th-level Fighter), a hot-tempered young savage eager to make his name raiding enemies. The Eomerings regularly raid the Variags of the Wastes of Khand, and the two peoples are great enemies, neither offering nor expecting quarter. The Eomerings are often found in the southern and eastern lands as mercenary warriors, adventurers, and sometimes raiders, though they do not raid Osgiliath or its possessions due to ancient alliances. 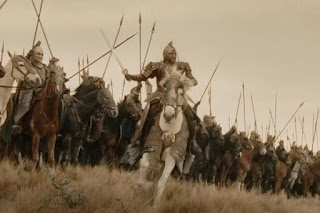 0226 SHADOW FORD: This shallow point along the Shadow River is guarded by 20 1st level veterans, one 2nd level sergeant, and one 3rd level lieutenant in service to the Necromancer (Hex 0624), camped on the northeast bank. They are commanded by Zaukritar the Black (Chaotic male Numenorean human 4th-level Magic-user; wand of fear), a loyal servant who embezzles no more than is customary. He has a personal guard of six zombies (plate with two-handed swords) and a hidden reserve force of 20 skeletons (chain mail, shields, and swords) hidden in a copse by the ford. Only those who are perceived as not threat may pass, and they must pay 10% of the value of their goods to do so (local subjects of the Necromancer pay only a modest fee). There is a 2 in 6 chance a caravan of merchants from the western realm of Rhun is camped at the crossing. If a large armed force approaches, messengers are sent to the village of Dol-Guldur, where resides a larger garrison.

0303 EOWYNGS CAMP: This camp of nomads (pop. 1,000, 250 able-bodied warriors) is the “capital” of the Eowyngs, a tribe of Rohirrim nomads, cousins to the Eomerings to the south (Hex 0207). The Eowyngs are matriarchal Amazons – all the able-bodied warriors are women; men serve in the camp to cook, clean, weave, and tend to the camp while the women hunt and go to war. Young Queen Rheda (Neutral female Rohirrim human 8th-level Fighter) and her twin sister, Wilda the Wise (Neutral female Rohirrim human 8th-level Cleric of Nessa) lead their tribe against the inroads of the Eomerings and strive to contain the corruption of the dark forces of Edoras (Hex 0702). The tribe has taken to the sea in the last two generations, with small fishing and ship-building hamlets on the shores of the Bay of Belfalas (one each in Hex 1001, 1002, and 1103); thus, they have also earned the enmity of the Corsairs. Eowyngs are often encountered in the lands to the south and east as mercenaries (especially for Osgiliath, an ancient ally), adventurers, and raiders.

0326 VILLAGE OF DOL-GULDUR: This village of 84 (21 able-bodied) Southlanders is home to much-oppressed farmers and herders who live in abject fear of their master, the Necromancer (Hex 0624). The numbers are deceptive, as they only list the living residents; the undead outnumber the living by five to one, including 300 skeletons and 200 zombies, who work the fields at the direction of the Village-Master, Dru-Gurz the Dreadful (Chaotic male Numenorean human 6th-level Magic-user; staff of necromancy), a noted vivisectionist who likes to experiment with recombination of body parts in animating the dead. There are also 50 men-at-arms, 20 1st-level veterans, two 2nd level sergeants, and a 4th-level lieutenant posted to the village. They, Dru-Gurz, and the entire company of undead will rush to the Shadow Ford if called upon to defend the western flank of the Necromancer’s realm. Dol-Guldur has only a smithy, a general store, and an ale-wife, Gritha (Neutral female Southlander human 3rd-level Magic-user); she is a rebel and is a contact for the Iron Ring Alliance led by the dwarves of Dain (Hex 0633). 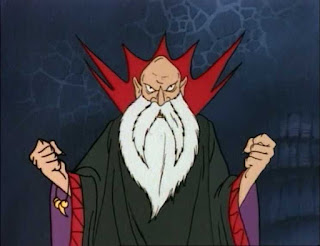 0332 DALEFORD: This shallow crossing of the River Erebor is protected by a small force from the human village of Dale (Hex 0432). The force consists of 40 1st level veterans, two 2nd level sergeant, and one 4th level lieutenant, fortified by three 2nd level and one 4th level cleric. They are commanded by Captain Girion (Lawful male Dunedain human 5th-level Fighter; chain mail +2, arrow of vampire slaying), a cousin of Lord Brand of Dale. The tax to use the ford is fair, merely 1 sp per leg (human and animal) and 1 gp per wheel. However, the guards perform a thorough search, ensuring that nothing passes either way that should not by the laws of Dale and Dwarfland (Dale’s nominal liege). A hamlet of 72 (18 able-bodied) stands on the southwest bank of the Erebor; it has a dwarf-smith (3rd level), a general store, and an inn – the Dead Dragon (a red dragon on his back with a giant empty stein on his belly). The proprietor is a dwarf, Gloin son of Oin (Lawful male 7th-level Dwarf; plate mail +1, war hammer +1, 3,000 gp gold necklace of rank). Gloin is the secret “Dwarf-King’s Man” at the ford, to back up defense of the ford and Dale in the event of an attack by the Necromancer; he first sends carrier pigeons to warn his counter-part in Dale and the court in Thorin, reveals his necklace of rank, then wades into battle.