One factor in adventuring that has long been forgotten in Dungeons & Dragons, even through to Labyrinth Lord, is the possibility of ransoming captured characters. While the idea of ransoming captives is an old one in gaming, likely originated in and used to this day in RuneQuest, it was apparently only mentioned briefly by Gary Gygax in D&D in the module B2: The Keep on the Borderlands. There, he mentioned that, “Organized  tribes can optionally be allowed to take player characters prisoner, freeing one to return to the KEEP to bring a ransom back to free the captives. Set the sums low – 10 to 100 gold pieces (or a magic item which the ransoming monsters would find useful) per prisoner.”

Ransoms are actually part of the original DNA of the game. In OD&D, brigands, bandits, nomads, pirates, and buccaneers all kept prisoners for ransom (or to sell as slaves). Historically, ransoms were actually the way many such groups – as well as nobles – got cold, hard cash to add to their treasuries. And so, ransoms – or at least, the potential for them – are going to be added back into campaign. This enables player characters to have a third “out,” so that combat does not always end in death or retreat. 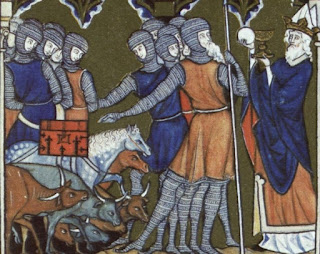 Of course, not all creatures are willing or even able to take on prisoners with the hope of gaining a ransom. Most humanoids have long come to the understanding that in exchange for taking a pass at a fine dinner of man-flesh they may earn themselves a significant treasure – but not all have learned this, nor do all care. Under no circumstances will a humanoid or monster take prisoners for ransom if the player characters have slaughtered their young or elderly, defaced their places of worship, or otherwise caused such pain and consternation that the treasure gained would never outweigh the desire for revenge. Also, humanoids never take their ancient racial enemies prisoner for anything less than torture and sacrifice – goblins never give quarter to dwarves, nor orcs to elves, nor kobolds to gnomes, except as  ruse to capture them for torment and worse.

Human scum – bandits brigands, nomads, pirates, and buccaneers especially – are always interested in taking prisoners for ransom. They have no desire to battle to the death, and they find it a very lucrative trade. Nobles usually only take other nobles or wealthy merchants for ransom; others are enslaved or killed out of hand. Slavers are more likely to take prisoners to sell, unless the captive is very wealthy, while berserkers and cavemen take captives only to torture and/or eat. Pilgrims generally turn dangerous adventurers over to local authorities (if Lawful) or keep them to sacrifice at their unholy shrines (if Chaotic). Druids keep interlopers prisoner until it is time to light the Wicker Man; dervishes release their enemies back into the desert, though without equipment or even clothing, to let the wastelands be judge, jury, and if needful, executioner.

Creatures of lesser intelligence and non-discerning temperament such as humanoids will usually ransom anyone for 10 to 100 gp, regardless of social class or station (they will keep all equipment and treasure found on the character, of course). But be sure that the messenger they send back to civilization hurries – they are not known for their patience, and sometimes their lust for entertainment or hunger will get the better of them! 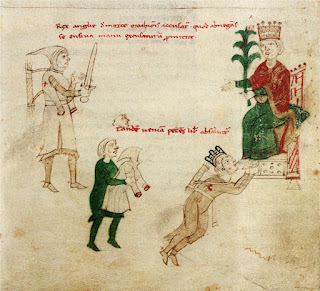 Humans and intelligent monsters are more likely to try to suss out their prisoners and find out just how much they are worth – a noble is obviously worth more than a mere peasant, a 5th level son of a duke is worth far more than a 5th level mercenary, and magic-users and clerics are often worth as much as a noble to their guild or temple! In such cases they will usually set the ransom at 100 gp per level of the character, more if of noble family or wealthy connections, less if of poor or modest means.

Failure to pay the ransom in the demanded amount of time ensures the wrath of the captor. Humanoids and monsters either eat or enslave the offenders, while humans are more likely to kill or sell their captives into slavery. And of course, in the case of captors of thoroughly Chaotic sort, there is no guarantee they will honor the deal even if they are paid the ransom!

On the player character’s part, in order to even take advantage of the opportunity for ransom, they must set up a ransom with someone back in civilization – someone close and readily accessible, someone that they can trust to pay the ransom when demanded. Player characters with families can usually count on them to pay a ransom if it is within their means, or even if they have to borrow heavily to do so – provided the character is on good terms with their family. Black sheep need not apply.

Characters who belong to guilds or similar organizations – temples, mercenary guilds, wizard guilds, thieves’ guilds, and the like – can count on these organizations to come to their aid, again, provided their fees are up to date and they are in good standing. Ion any case, the character, unless he has the fund on deposit, will be required to pay back the ransom paid, with interest, and is beholden to the family or organization even moreso until it is paid.

So, as players, please remember this third option! Not all battles need to be to the death. You now have the option of living to fight another day – and seeking revenge on those who captured you and ransomed you!
Posted by James Mishler at 11:03 AM