One thing that has always bugged me about reaction rolls has been that they have never followed the basic curve that is presented with most ability scores. In BX and Labyrinth Lord, they are rolled on a 2d6 table, and so the Charisma modifiers are all on the 2d6 curve (as opposed to the 3d6 curve for all other ability scores); and AD&D had a d00 table which did not follow any curve.
And so, I have come up with the following new tables: 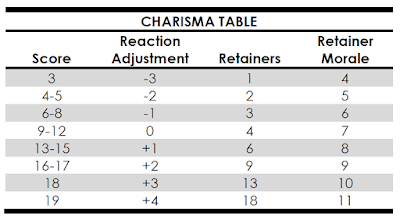 Note that Morale remains on a 2d6 scale, as I feel that works plenty well as it is.

The Charisma bonus of the party spokesperson affects how the encountered creatures react; if the character with the 18 Charisma stands at the back of the party and does not interact, their bonus is worthless; only one bonus counts, that of the spokesperson. If multiple party members try to speak all at once, any bonus is lost, but any penalty still applies; in such cases, there is an additional -2 penalty when dealing with Lawful groups.
Note that there are certain cases where a reaction roll is not needed. For example, certain humanoids always react with hostility and immediately attack certain demi-human races (and parties containing members of such races): kobolds always attack gnomes; goblins always attack dwarves; and orcs always attack elves. All humanoids otherwise react with a -2 penalty to any party whose members are of any demi-human race (such as orcs reacting to a party with dwarves, but no elves).
Chaotic creatures of extra-planar sort have a 5 in 6 chance of immediately attacking extra-planar Lawful creatures, and vice-versa, regardless of the reaction roll (as do Champions of Law or Champions of Chaos). Similarly, any group of obvious Chaotic nature that encounters a group of obvious Lawful nature has a 4 in 6 chance of attacking without even rolling reaction; Lawfuls encountering Chaotics have a 2 in 6 chance of immediately attacking (Orcs encountering the King’s Rangers; Crusaders of Law encountering members of the Cult of Chaos, etc.).
Other examples also include any party found in a creature’s lair, most especially if the party has already slain members of the creature’s clan or tribe or looted their treasury. In such cases, they will be immediately hostile and attack. They might, if patient and cunning, seek to trap the intruders in such a way that they gain advantage on their attacks and/or can eliminate the party without a fight (cf. The Hobbit, ex: Smaug and Barrel-Rider).