[The Realm] B is for Black Hobbits

Hobbits are among the few intelligent races that remain unclaimed by the Gods. That is, while everyone knows that Szkarnadle created the Trolls, Elthonell created the Elves, Toreg created the Dwarves, Osgdagor created the Orcs, and Koram created Men, no God has come forth to claim the Hobbits as his creation. Even Xyrmgnollven is well known as the creator of the Gnolls. But no God has ever laid claim to creating Hobbits. The same goes for Goblinoids and Gnomes, for that matter…

While it is a great mystery to many, even most Gods, there are some very few who know the truth, and more who suspect it. The truth of the matter is that Hobbits, Goblinoids, and Gnomes are all offshoots of the ancient Troll race. When the Elder Gods punished Szkarnadle for his sin of abandoning his post and prematurely creating the Trolls before their time, they also took that malformed race and, like their sire, caused them to sleep within the stones and soil of the World. However… while the Gods are powerful, wise, and quite intelligent, they are neither omnipotent nor omniscient… and they missed some of the Trolls.

Specifically, they missed some of the smallest and weakest of the primeval Trolls, which had wandered off into the forested hills and glens not far from the site of their creation. There they remained for countless centuries, untouched by the ways of Gods, Dragons, Elves, Dwarves, or Orcs. After long millennia of isolation, the Petty Trolls were a small, stumpy race, ranging from three to four feet tall. The less pleasant forms of the early Troll race had been lost, as most such traits also slowed them mentally or physically, and without divine protection, the weakest were lost to predators, and only the strongest survived. Also, these small Trolls had taken to living in caves early, for protection against the same predators that took the foolish and slow, and so reinforced the small nature of their race. Notably, they lacked the great strength and regenerative powers of their later true Troll cousins, as these were byproducts of the Trollish exile within stone and soil. What they did possess was a strange, slight touch of the Fey, for it was from captive Fey spirits that Szkarnadle had created the Trolls; this Fey essence is all but lost in the True Troll bloodline, having faded from them in their long slumber deep in the earth.

Over time and through growth and division they formed three major tribes, the Mountain Tribe, the Hill Tribe, and the Meadow Tribe. But time passed, as it is wont to do, and eventually, these small Trollish beings encountered other races. Unfortunately, the first of these that they encountered were the Orcs! A tribe of Orcs invaded the mountains held by the Mountain Troll Tribe, and not worrying overly much about the nature of unusual races of petty and runty, if unknown sort, they enslaved them. These Orcs were later driven out by invading bands of adventuring Dwarves; the Orcs took their Petty Troll slaves with them to further lands, and were themselves later enslaved by a wizard. Uncaring about any of his servants, save that there be more of them for fodder for his wars, the wizard forced the fecund Orcs to mate with the Petty Trolls; the result, after long centuries of interbreeding, was the Goblin race. As the Goblins inherited the fecundity of the Orcs, they too were able to interbreed with other races. Hobgoblins are the result of further interbreeding with Elves and Dwarves (and eventually Men), while Bugbears are the result of Hobgoblins interbreeding with Ogres and yes, even bears!

As to the fate of the remaining Petty Trolls, the Dwarves of the mountains soon came into contact with the Petty Trolls of the Hills. These they mistook as long-lost rustic cousins, for they were much of a size. As most of the adventuring Dwarves were male, and the clans were much in need of growth in numbers, they took many of the Petty Trolls to wife. From these long centuries of intermarriage came forth the Gnomes. As the ancestral Dwarves and Petty Trolls of the Gnomes were themselves crushed by the returning wave of Goblins, and then scattered to the four winds, they lost their whole history, and thus know little to nothing of their origins as a long-lost Dwarf colony.

Finally, we come to the fate of the Petty Trolls of the Meadows. They remained long undisturbed by Orc or Dwarf, until the return of the Goblins to their ancestral lands. When the primeval Gnome civilization was smashed, their isolation came to an end. Encroachment by Goblins forced them to begin to migrate outward. Some migrated out with the Gnomes, and eventually settled near or among Dwarves; these were the ancestors of the Stouts. Others migrated into distant scrublands and woods on the verge of or even within Elven territories; these were the ancestors of the Tallfellows (and, truth be told, of the Wood Elves, together with numbers of merry and indiscriminant Elves). Most of the remaining Petty Trolls migrated into lands newly-settled by Men; these were the ancestors of the Hairfeet. Finally, a small number of clans chose not to migrate out, but down, further and deeper into their ancestral caverns; there they encountered the Dark Elves…

And these were the ancestors of the Blackheart Hobbits, known more simply to Men and others as Black Hobbits, or among themselves, the Xvarts. For there, deep beneath the feet of their distant cousins, far from the meadows and plains that they knew and loved, they were enslaved by the Drow, the Sons and Daughters of Morda the Dark Elf. Whether through actual interbreeding or merely through the natural processes native to the physiology of the Petty Trolls, like their much-removed cousins, the Xvarts took on some of the characteristics of their masters, among whom they lived and worked. Their naturally brownish skin turned blue, bluish-black, and blackish-blue. Their hair remained a dark black; like that of their distant True Troll cousins, it is bristly, thick, and rough. Their eyes glow orange-red due to the strong Infravision they possess (90’). Unlike their Hobbitish cousins, they tend to be thin and frail looking, though those who have enjoyed prosperity rather than the usual deprivation of those in the deep pits will be much more fleshed out and healthy-looking. In fact, were it not for the skin tone, bristly hair, and orange eyes, well-fed and plump Black Hobbits would be indistinguishable from their True Hobbit cousins... except for one other factor.

Black Hobbits are avowed and joyous followers of the ways of Chaos.

For when the Dark Elves enslaved the Petty Trolls, they found not a recalcitrant, troublesome slave race, but willing co-conspirators to ways blasphemous and vile. For the Petty Trolls who were wont to live deeper in the caverns, away from their cousins, were mostly the unpleasant and unfriendly types who despised the blue sky, clean air, green growing things, and babbling brooks. They favored the dark and shadowy places where light had never ventured, where secrets lay hidden for untold centuries, and where foul murder and less pleasant acts could remain unseen. Some thought that perhaps these Petty Trolls had been tainted by some long-lost bit of blood from the Dragon Primeval; others thought that maybe they had heard, deep within the earth, the dark dreams of their creator, Szkarnadle. Whatever the cause, most of the Petty Trolls enslaved by the Dark Elves soon became favored servants. Those less willing to serve were broken to serve; those few who escaped this service were the ancestors of the Mites and Pesties that haunt the deep warrens of the underworld.

But those Xvarts who served their masters well throve in the dark, fey kingdoms of the Drow. Over time, however, no few moved on to “greener pastures,” seeking out opportunities for themselves. Most of these remained deep beneath the surface; others moved back to the Sun-Burned lands, as their cousins call them, whether through wanderlust, some last vestige of their Fey ancestry calling them forth, or merely seeking surface-folk to fleece and feast upon. Generally, these settle in places where their services are most remunerative, either in service to greater beings or in setting up shop on their own. In more “pleasant company,” they usually live in Chaos-ridden or Chaos-neutral lands, such as Arcanos, Morgoll, or the Kingdom of Djiabaleur. They prefer “civilized” company, rather than the bestial, savage company of Orcs or Gnolls; they tolerate their Goblin cousins, as they easily outsmart them and bully them, and can always cheat them at cards.

Blackheart Hobbits prefer to live in much the same wise as their Lawful-oriented Hobbitish cousins, complete with seven meals a day, a comfy bed at night, and a couple of stout ales and a wallet of pipeweed as time and money permits. It just so happens that Black Hobbits usually earn such keep through assassination, dark alchemy, thievery, mercenary sorcery, grave robbing, slave or drug trading, or other vile and devious means, rather than as yeomen farmers, grocers, and merchants. Most also continue to enjoy the vile sports and entertainments learned under their Dark Elf masters, such as cannibalism, diabolism, and torture… though always with a “civilized” touch, such as taking time to break for tea… 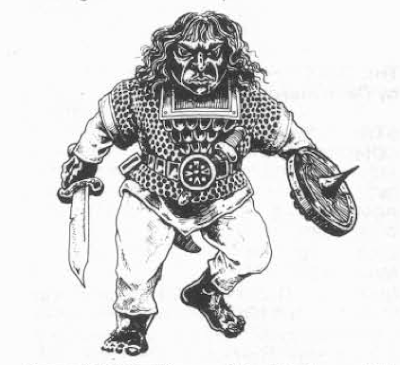 Black Hobbits are the same size as their surface cousins, being about 60 pounds and only attaining a height of around 3 feet; those who have lived a life of deprivation can be even thinner, between 40 and 45 pounds and very scrawny. They have blue, bluish-black, or blackish-blue skin, furry feet, bristly black hair, and orange-red eyes.

Black Hobbits may not use large and two-handed weapons, but may use any other weapon and armor as indicated by class.

Black Hobbits have an uncanny ability to disappear in the subterranean, cavern, and dungeon environments. In such regions Black Hobbits can hide with 90% ability. They can also hide in shadows or behind other forms of cover when in bushes or other outdoor cover on a roll of 1- 2 on 1d6, but they must be silent and motionless.

Black Hobbits are dexterous folk who get a bonus of +1 to initiative rolls when alone or in a party composed only of Hobbits. They have keen coordination that grants them +1 on any missile attacks.

Because they are so small, Black Hobbits have a lower armor class (-2) when attacked by creatures greater than human sized.

• +2 save versus breath attacks

• +4 save versus petrify or paralyze

Like Dwarves, Black Hobbits are hardy beings, resistant poison, and as such they receive bonuses to defend against poisons. Their diminutive stature grants them a bonus to finding cover and avoiding breath attacks.

Black Hobbits may select the following classes, with the indicated level limits: