[The Realm] F is for Fungal Forest

There have always been fungal forests in the Realm, though prior to the Wizard War, they were almost exclusively found in subterranean locales. Since then, however, some sort of magical mutation has caused the rapid growth of surface-world fungal forests throughout the Realm. These fungal forests usually grow in places where more traditional surface forests of trees or marshy lands once stood. The fungi of the forest include slimes, molds, jellies, mushrooms, puffballs, stinkhorns, and morels, from small common-sized organisms through gnome-high mushrooms to colossal toadstools the size of size of tall trees. Often the forests are as dark and dank under the eaves of the mushroom caps as any subterranean cavern.

It is thought that the surface fungal forests formed when a large cavern housing a subterranean fungal forest collapses, but not fully, leaving some portion of the fungal forest intact. Some sages believe that the strange and powerful magic released during the Wizard War mutated these fungal forests, such that they could thrive in the open air of the surface world. Others say that it was the work of the Dungeon God, or perhaps one of the various Daemon Princes such as Juiblex, seeking to expand their subterranean domains. Perhaps each different fungal forest has its own distinct origin.

Due to the relatively dry wastes dominant in the western Heartlands, fungal forests are rare, with one notable exception… the Great Fungal Forest, the largest such in the Heartlands, can be found straddling the western slopes of the Giant Spine Mountains, north of the Jotun Hills and south of Pendrayk. This hilly region was once home to extensive mixed evergreen and deciduous forests, favored by local wood elves and gnomes. When Kishar was foolishly summoned by one of the local Wizard Kings, she unleashed her wrath, which re-sculpted the landscape for hundreds of leagues around. Large cavern systems under the local forested hills collapsed en masse, killing countless goblins, orcs, elves, and gnomes, not to mention untold wildlife of surface and subterranean sort. Many of the trees were destroyed in the volcanic eruptions that created the Flaming Highlands of Herkull. Flattened and burned, the fallen forest was ripe for fungal invasion. 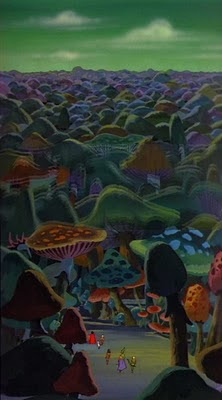 The shifting landscape also caused the many mountain streams to change their course, flowing down into the local cavern systems, instead of west into the plains of the Heartlands. Over the following centuries, the fungal forests of the lands below expanded into the dying forest of the surface world, until today the Great Fungal Forest covers an area almost 200 miles north to south by 180 miles east to west. No city or kingdom claims the Great Fungal Forest, not even Djiabaleur, as there are far too many dangerous creatures with far too little to gain. However, the rare and often magical fungi that can be found in the forest, together with the rich ruins that still remain untouched from before the Wizard War, often attract adventurers seeking wealth and glory.

Of the old inhabitants, few remain; goblins, elves, and gnomes alike consider the region cursed, which makes it a haven for orcs and ogres, though they have much competition from the more unusual inhabitants of the region. Too, there are primitive, degenerate men found in the forest, descendents of the men of the mountain towns ruined in the catastrophe, often living in the ancient silver, gold, and other mines their ancestors dug. Finally, the fungal forest is also home to a number of bands of outlaws, both bandits and freedom fighters, who prey on the people of Pendrayk and/or fight against the occupation of Djiabaleur.

Natural surface fauna is rare in the Great Fungal Forest; subterranean creatures, many known only to myth and legend in the surface world, make the forest their home today.