[The Realm] E is for Elephant

War elephants are found throughout the Realm. Every petty king, shah, khan, wang, or rajah desires a war elephant or twenty. They are relatively rare in the western Heartlands due to the lack of suitable forest and plain environments. The cities of the Western Wastes each have only a handful of the beasts, more for show than for use in battle, as they are also of little use in the small, cavalry-based skirmishes that predominate in inter-city warfare in the Wastes. The Grand Marshal of Southgaard has a small army of elephants, due to his use of large numbers of Southlander and Southron mercenaries. Most of the cities of the Southern Marches have moderate-sized elephant forces, due to their larger population base and their subsequently larger, infantry-oriented armies. The Sultan of Kadish has the largest army of elephants in the Heartlands; they are definitely not for show, as they are very useful against the Orc hordes of Djiabaleur, who rules the Eastern Heartlands to the north of Kadish. The barbarian kings of the savage Northlands usually prefer to hunt their native mammoths, rather than train them, but on occasion a jarl or three have been known to use the great, hairy brutes in battle. Southern giants are said to ride elephants into battle as Men ride horses, though folk of the Heartland dismiss such legends as pure fantasy! 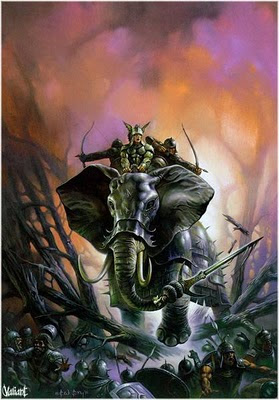 War elephants of the Realm are used as they have been on Earth, deployed to crush and break infantry lines, trampling the enemy underfoot. They are also very effective against massed cavalry who are not used to facing elephants. Howdahs are used as platforms for archers and for pikemen, though the pikemen are used only to keep away heroic warrior-types who would seek to hamstring the elephant. Most war elephants wear special barding; full suits of armor includes leather barding for 500 gp (AC 4); scale barding for 1,000 gp (AC 3); and plate barding for 2,500 gp (AC 2). Half-barding is available to protect the front legs, forequarters, shoulders, head, and trunk, and is available at half listed cost, but attacks from the rear or rear flanks of the elephant are still against AC 5. Many war elephants are trained in the use of a trunk-wielded weapon, such as a giant-sized sword or ball-and-chain; such weapons are larger than any man could wield, even in two hands, and thus deal 3d6 points of damage. War elephants can attack once per round with their weapon in addition to attacks with their tusks.