[The Realm] K is for Kishar

Kishar is the First-Born Dragon-Queen, the Great Dragon Bitch, Mother of Dragons, Mother of Demons, Big Red, and She-Who-Burns. Born of the Heart of the Dragon Primordial, Kishar is the first and greatest of the Five Dragon-Queens, the mothers, queens, and goddesses of all dragon-kind. She and her sisters were born from the largest parts of the Dragon Primordial which, after being slain by the Elder Gods, fell down to the World and came to rest in places of great and potent power. Kishar and her sisters led the attack in the War of Angels and Dragons, seeking to overthrow the Elder Gods and their Law which had, to their way of thinking, usurped the rightful place of the Dragon Primordial and the way of Chaos. Though they failed in their initial war, they have been more or less at war continually with the Gods and Law ever since, keeping the Gods from realizing their Plan to re-make the World wholly in their image.

Like the demons and gods, however, the Dragon-Queens and other Gods of Chaos have been limited by the terms of the Divine Compact since the end of the War of Angels and Demons. Limited not in that they themselves ever signed on to the Compact, but by the very real limitation that if they did not recognize the Compact, and thus remain outside the World, the Gods, Angels, and Demons together would gang up on any who abrogated the Compact, an alliance against even which all five of the Dragon-Queens together could not stand… and the five Dragon-Queens had not stood fully aligned together since the War of Light and Darkness, save for the debacle of the War of Angels and Demons. Thus, in the long millennia since, Kishar operated through clerics and servants, who wrought her will on the World in proxy.

During the early years of the Wizard War, Kishar was foolishly summoned into the World by Shelmorian Vorl, a wizard of great talent but little wisdom. Naturally, he could not control the goddess as he could control other summoned demons; the result was known as the Wrath of Kishar, a terrible event that devastated the western Heartlands and created the Western Wastes. The last laugh, however, was on Kishar, as though Shelmorian had summoned her hence from her otherworldly Hell, the limitations of the nature of the summoning were such that they forced her into a mortal body! Thus, while Kishar now had a way around the Divine Compact against direct assault and action on the mortal World, she too could all-too easily perish, and even by mortal blades! This she discovered when the Unknown Hero, who gave his life for the cause, stopped her wrath and ended the destruction by striking her with a dragon-slaying blade, paralyzing her. Though she survived the encounter, it frightened her… 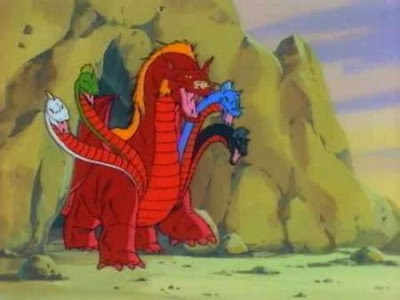 Unsure whether death in the mortal World now meant true and final death for herself, her wrath cooled considerably, or at least, her own personal, physical enactment of it. She settled down in the wastelands of her creation, first to heal her grievous wounds, then to build her power. For though she was now of mortal form, she still had much to do as a Dragon-Queen; she could still grant spells and visions, send out servants to perform tasks, and so forth. She has since set up her own petty kingdom, of sorts, in the Western Wastes; the heart of the Wastes are known as the Wastes of Kishar, and are home to all manner of evil and Chaotic dragons and dragon-like creatures.

Like all the Dragon-Queens, she has five dragon heads, one of each of the major chromatic colors: outer left Black, inner left Blue, central & body Red, inner right Green, and outer right White. The central Red head and neck is twice as large as the other four. Her body overall is and is thick, strong, and powerful; some might describe it as almost elephantine in bulk. Her scales are a deep maroon above and a crimson-red on the underbelly, including the scales on the underside of all five necks. She has a pair of great red bat-like wings upon her back; they seem far too small to lift such bulk, but nonetheless, she can fly, if clumsily. She has a great red-orange mane of bristly hair that flows from the crown of her Red head, down her central neck and back, to half-way down her tail. Her tail is long and thick and heavily armored at the tip; a retractile poisonous stinger the size of a long sword is found at the tip. She stands 30’ tall at the shoulder, with a 60’ long body, a 60’ long tail, and 30’ long necks.

As a mortal being, Kishar has the stats of a Chromatic Dragon (AEC p. 121), with the following additions:

• All her saving throws are 3

• She has the personal spell-casting abilities of an 18th level cleric of Chaos and an 18th level magic-user with Intelligence and Wisdom scores of 19, having access to all known (unnamed) spells and many named magic-user spells

• She is immune to all forms of charm, sleep, enchantment, suggestion, and similar powers and spells

• She takes half-damage (no damage on a successful save) from all the following normal and magical attacks: cold, gas/poison, fire, electricity, and acid

• She has the following abilities, which she can use at will, one per round per head: clairvoyance, clairaudience, continual darkness, fear, detect invisible, detect magic, dispel magic, ESP, greater phantasmal force, levitate, polymorph self, read languages, read magic, suggestion, telekinesis (500 lbs. per head), wall of fire, wall of ice, and water breathing

• She is able to teleport without error, at will, though only to known and studied locations

• Her primary treasure hoard in the Dragon’s Graveyard has 10 times the maximum number of all possible coins, gems, jewels, and magic items! She also has five lesser treasure hoards, scattered around the Wastes, each equal to Hoard Class XV x 5, though each is guarded by a daughter, a normal Chromatic Dragon, plus 1d4 other dragons of chromatic type (and random sizes and ages)!

At some point in the last several centuries, she moved her personal, primary lair from the Wastes to the Dragon’s Graveyard, which is found on Rogull, the Dragon-Moon. It is thought that she did this in order to protect her vast treasure from the greed of Djiabaleur, the Dread Lord of the Heartlands, who, approaching the status of divinity himself, sought to challenge her and steal her magical hoard for his own purposes. She still wanders the wastes that bear her name; most mortals are beneath her notice, even when they seek to attack her, but should an obvious Hero-type challenge her, she will gladly stomp him into the ground for his troubles. And then again, she might just feel a bit peckish, or a bauble carried by the mortal might catch her eye… 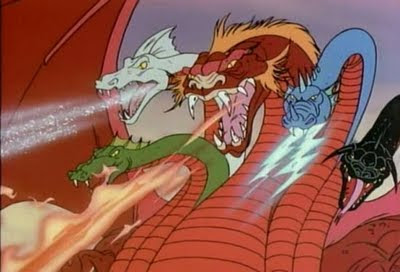 When encountered in the Wastes, there is a 10% chance that Djiabaleur chooses that moment to attack Kishar, seeking to overthrow her or, at the least, seeking to get enough leverage on her for her to give him some of her magic items. She rarely ever turns from battle with Djiabaleur, so great is her hatred of him that it overwhelms her sense of self-preservation. Needless to say, getting caught between the two in battle is an unpleasant place to be, and adventurers in such straits may wish they were merely caught between the proverbial rock and hard place.

Though not commonly known, she also travels the wider world in polymorphed form… though she loathes to take on the form of “lesser” creatures, from time to time she does so when she wishes to see and study something with her own eye or hear with her own ears, rather than through her minions or through magic, and stealth is required. Her favorite form is that of a beautiful, flame-haired elven fighter/magic-user/cleric. There is a 15% chance when so encountered she is traveling with the Arachnidaemon, Lolth, a sometimes-ally, who is similarly polymorphed into an identical form (and, like Kishar, trapped on the mortal World in mortal form). Legends of these “Sisters of Chaos” spring up from time to time, as the pair like to get their Chaos on, and go raid a Lawful temple just for the fun of it…

Posted by James Mishler at 4:11 PM

Email ThisBlogThis!Share to TwitterShare to FacebookShare to Pinterest
Labels: A to Z, Gods, The Realm