The forces of Law, personified by the Star Gods and the Lords of Life, hold life to be sacred, and reward those of Lawful sort who cleave to this belief, and punish those who do not.
Though Death and Entropy are among the strongest elements of Chaos, the forces of Chaos, personified in the Demons of the Outer Dark, too, value life… to the extent that they can use it, abuse it, corrupt it, and turn it to their own means! For while final victory will be theirs in the end – as in the end, all things fade and die, and entropy always wins – with the corruption of life, and the gathering of more resources to the bosom of Chaos, that victory will come that much sooner.
Chaos cannot create life, it can only corrupt it, twist it, and mutate it to its own ends. And so, the Demons of the Outer Dark prefer that their followers do not kill, they would rather that they corrupt their enemies to the ways of Chaos. They especially prefer that their minions corrupt those who are valiant followers of the forces of Law, for such is the sweetest victory, as it not only gains for Chaos strong minions, but also denies those resources to the followers of Law.
So surprisingly to some, the Lords of the Void and their philosophical descendants, the Banemasters of Demonfang Citadel, usually go out of their way to capture their victims and opponents, rather than kill them outright.
Common beings of Neutral sort and lesser beings of Lawful nature and no great power are considered worthy only of slavery – their degradation in this manner is pleasing to the Demons of the Outer Dark, for it causes fear, suffering, anger, and hatred, and the lamentations of the slaves are as music to their ears. Also, of course, the use of slaves enables the minions of Chaos to free up their other resources to continue the war against Law.
Heroic followers of the forces of Law, on the other hand, are sought after for the opportunity to corrupt them to the ways of Chaos, and to turn them into tools for the advancement of the purposes of the Demons of the Outer Dark. 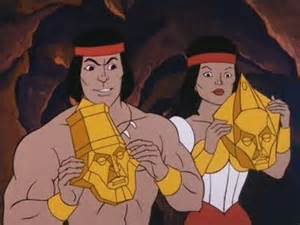 Temptations are usually the first step, used when the heroes are yet young and inexperienced. The “benefits” of Chaos – vast wealth, untrammeled power, and access to mighty sorcery and super-science – will be offered to tempt the young heroes away from Law and into the hands of Chaos.
If temptations do not work, then the forces of Chaos seek to capture and corrupt the heroes of Law via transformation through an admixture of blackmail, torture, sorcery, and super-science. Even if they are merely reduced to mindless servitors, it is considered a significant win for Chaos and a loss for Law. 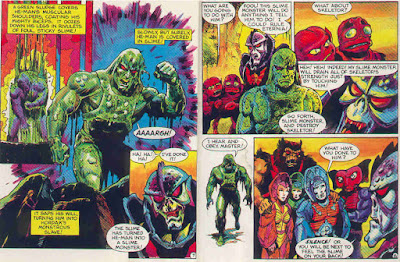 Only after numerous attempts to corrupt the heroes of Law via temptations and transformations fail, do the forces of Chaos seek to eliminate a Lawful hero via death; but even then, death on the battlefield or simple murder will never do! For the forces of Chaos, being arrogant in the extreme, must always try to prove their natural superiority over the forces of Law. And so, the minions of Chaos seek to capture the heroes and place them into or trick them and get them to willingly walk into, an Ingenious Death Trap. Or, most insidiously, bring them to a final end in an Eldritch Ritual, such that their souls are tendered directly unto the merciless hands of the Demons of the Outer Dark. Only then will Chaos truly prevail, denying Law its heroic resources through Death and Entropy and thereby gaining infinitesimal growth in their own power.
Note that once the forces of Chaos have resorted to using Ingenious Death Traps to eliminate Lawful heroes, that does not mean they will not resort to the use of temptations and transformations later. Whenever opportunity strikes, Chaos will use whichever method is easiest, readiest at hand, and most likely to succeed.
All this is not to say that there are not those aberrant minions of Chaos who would not simply prefer to slaughter followers of Law, or even any other living thing that gets in their way. However, these tend to be lone actors, shunned even by other minions of Chaos. If such psychopaths are part of a group such as the Banemasters, they usually have to be reigned in by the leadership or more powerful minions, often being unchained only in time of dire need (for such loose cannons often cause their masters as much damage as their enemies). 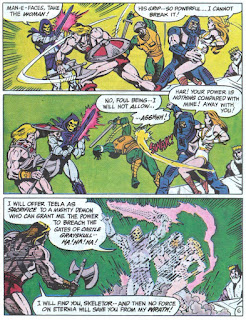 The “blessings” of the Demons of the Outer Dark for those minions who succeed at corrupting the heroes of Law can range from the esoteric – such as more Experience Points, more Hit Points, more Mental Strength Points – to the powerful and prosaic, such as a new powerful mutation, access to new eldritch spells, the granting of a mighty magic weapon, or the wisdom to use long-lost super science. Even the final end of a hero can grant great rewards, if that end is properly executed...
As the foul villains dedicates to Chaos are all NPCs under the Judge’s control, such rewards are hers to dispense to the NPCs as events dictate.