The forces of Law, personified in the Star Gods (aka the Lords of Life, various other deities of Law, etc.), value life – ALL life, even that of evil beings who have been corrupted by Chaos. Thus, even the lives of the most hardened villains, inhuman mutants, and wicked monsters are considered sacred. Killing a sentient being – even in self-defense – is considered murder, a terrible sin.
The lives of all sentient beings, including Robosophonts, are considered sacred (non-intelligent “Dumbots” are not). Only the Undead are considered irredeemable, and even then, over the ages there have been cases which give even the Star Gods pause. Killing non-intelligent animals for food, as predators do, is allowed, though even here, the forces of Law prefer such be kept to the minimum required; sports-hunting is considered be the equivalent of murder.
Thus, those who are Lawful strive to adhere to the sanctity of life at all costs – even to the point of saving the lives of the very Villains who, moments ago, threatened their own lives! The forces of Law hope for the redemption and repentance of those who have turned to the ways of Chaos, rather than their violent end. The destruction of life, even that of Chaotic creatures, only strengthens Chaos, as Entropy, and the end of Life, is a component of the strength of Chaos.
And so, Law rewards those of its adherents who spare the lives of their enemies, and severely punishes those who do not cleave to the sanctity of life. 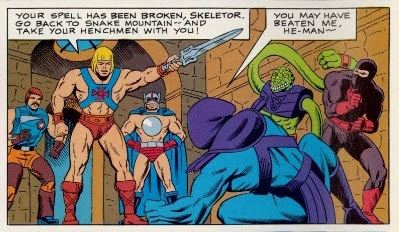 REWARDS
Every time a Lawful hero or team spares the lives of their foes, each hero gains the following:
1) A Free Saving Throw Re-Roll, to be chosen by the hero when needed, reflecting the blessings of the Lords of Life. These may be saved and used whenever the hero wishes, and do not need to be used only against the villains from that encounter. The re-roll can be declared after a saving throw is made, and the better of the two rolls is used.
2) A bonus of +2 (+10%) on all attacks, saving throws, ability checks, and skill checks for the entire battle, against the same villains, the next time the villains attack the heroes (or the heroes go to aid innocents against the villains).
This does not apply if the heroes go out and seek to hunt down the villains!
3) The villains suffer a -2 (-10%) penalty on all attacks, saving throws, ability checks, and skill checks for the entire battle, against the same heroes, the next time the villains attack the heroes.
A hero may give a Free Saving Throw Re-Roll to a teammate or innocent who just failed a saving throw.
A hero may trade in three Free Saving Throw Re-Rolls for a Second Wind in battle; this immediately grants the hero 1d4 Hit Points or Mental Strength Points per level (i.e., a 3rd level hero would roll 3d4).
PUNISHMENTS
Should a Lawful hero ever take a life, in battle or by murder or other foul methods (though not honestly by accident), they suffer the following penalties:
1) They cannot be magically healed by a cleric devoted to Law. The magic simply will not work. Even magical healing from a Neutral cleric only heals half the rolled points (round down). Chaotic healing works just fine, well, as fine as any healing provided by a cleric dedicated to Chaos…
2) They cannot gain any benefit from a blessing or other positive magical effect cast by a cleric or magic item of Law. Positive magical effects cast by a Neutral cleric fail half the time.
3) They suffer a -2 penalty on Reaction Checks with Lawful beings, -4 if the beings are aware of the fallen hero’s status as a murderer/killer.
4) Clerics of Law, Paladins, and other sub-classes lose all benefits and abilities that accrue to them due to the patronage of the forces of Law (Judge’s discretion).
Fallen heroes and heroines can only regain the grace of the forces of Law by seeking to atone for their misdeed by taking on a quest given them by a cleric of Law. The quest will be difficult, though not outright lethal, and will also have opportunities to prove the sincerity of their repentance, as well as temptations to fall further into corruption (the former provided by the forces of Law, the latter by the forces of Chaos).
If the fallen heroine successfully completes her quest and does not succumb to the temptations of Chaos, she will once again be in the good graces of Law, and all the restrictions above will be lifted.

However, if she refuses or fails the quest, or succumbs to the temptations of Chaos, she has failed, and at the least, has fallen from Lawful to Neutral (or even outright Chaotic), and cannot again regain the grace of the forces of Law without a major life-altering event in which she proves her worth.
Next Tuesday: Corruption of Chaos in LEGENDARIA
Posted by James Mishler at 1:00 AM