[The Realm] C is for Charonadaemon

The Charonadaemon is Kharun the Reaper, also known as the Demon Prince of Death, Winged Death, the Hammer of Souls, and the Glutton of Souls. Kharun is the daemon of Accidental, Untimely, and Wrongful Deaths; he and his minions come upon children, adults, and the elderly in the night and take them before their time. He stands under ladders and tips them when no one is looking. He drops bricks from crumbling buildings on unsuspecting heads. He spills water on stones, loosens stones on stairs, and spits diseases on rusting iron points. He starts drunken tavern brawls and inflames them until skulls are broken and guts spilled on sharp knives. He is also the infernal coup de grace of those dying on the battlefield; if he or his followers get to you before your patron or his minions claim you, Kharun gets your soul!

Kharun is depicted as a seven-foot tall blue-skinned Man-like figure with serpents for hair, large bloodshot red eyes, a great vulture-like nose, pointed ears, wide fanged mouth, a forked tongue, a spiked beard, and vulture wings. He wields a great two-handed mallet shod with gold. He wears red padded armor; the padding is made from the flesh of his victims, and it is red because it is drenched in their blood and brains. He is usually accompanied by three, five, or nine giant vulture-headed and winged constricting serpents; one of these he rides like a horse, and the others carry away his victims in their coils. 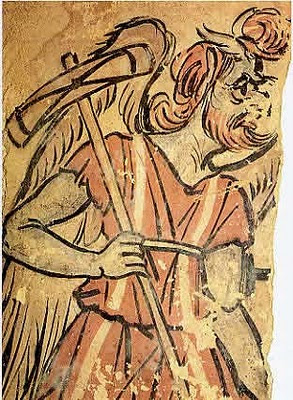 Kharun comes for you when you least expect it. One propitiates the Charonadaemon, one does not worship him… well, if one is sane. There are those who worship this vile entity, especially those who seek power over others through causing untimely death. He is not a daemon of assassination, as such, more a daemon of well-sought unlooked-for deaths. Pray enough to him, and perhaps he will send an imp to an enemy to leave a rusty nail in his bed. Sacrifice gold and gems to him, maybe he will send a plague demon to haunt the home of your enemy. Give him your daughter, screaming, broken, and draining of her life’s blood on his altar, and he might well drop his hammer straight on your enemy’s head. Maybe.

Unfortunately, there are those who enjoy this sort of thing… terrible, nasty people, who revel in unpleasant deaths. These are his worshippers, and the craziest, meanest, and nastiest of them are his clergy. Each temple in a region is usually independent of the others; they all compete to see that as many are claimed by Kharun as possible, save of course, those who pay to have Kharun’s attentions cast elsewhere.

Kharun’s clerics paint their bodies blue and usually wear masks depicting their dread lord’s face. They usually wear padded or leather armor, as Kharun doesn’t like his clerics feeling they should be too well protected from his or his minion’s ministrations! Naturally, they wield hammers; the more richly and extravagantly decorated the better. Sacrifices are made on Kharun’s altar with a great, two-handed mallet; the victim’s head is smashed in, but only after the rest of the body is repeatedly beaten, every possible bone broken, by smaller hammers.

Needless to say, Kharun is worshipped in public in very few places, usually only the most despicable cities, such as Arcanos, where his largest public temple in the Heartlands can be found. The Hammers of Kharun is a guild of assassins that operate out of the temple; by the needs of their profession, they are less picky that the priests as to their weapons and methods used. They are also cheaper than most other guilds, as they tend to enjoy their work; but their results are never, ever subtle! He is the patron daemon of the Makkhus Highlanders Clan; they know him by the name of Khaar. Their berserkers go forth into battle painted blue, naked, screaming his name, and wielding only a great hammer.

Hidden cults of Kharun can be found elsewhere in the Heartlands and Highlands; his worship is proscribed in the Kingdom of Djiabaleur no less than it is in Haelyx. Cultists tend to follow armies secretly in order to claim the souls of the dying for their dread lord. Even the clerics of Law are hard-pressed seeking mercy for these madmen when they are caught; most folk burn these villains at the stake when they are caught “blue-handed.”

His temples are usually guarded by berserkers, constrictor snakes (normal and giant), vultures, quasits (usually in the form of vultures or snakes), and less commonly, mariliths, vrocks, and vulture-winged erinyes. Clerics of Kharun never use undead; for them, death should be final! However, they are very effective at turning undead, operating as a cleric one level higher.

He is more popular in the Southlands, and worshipped as well by savage tribes of Men and Orcs in the Sunlands and Farlands. His Hell of Wrongful Deaths is said to be found deep beneath the Black Sands of Kharunstan, in the debatable lands between the Southlands, Sunlands, and Farlands. As the Glutton of Souls, he never willingly releases a soul once he has it; one must go to the Black Sands and seek out the Pit of Lamentation, delving deep into the Hell of Wrongful Deaths to rescue any soul that has fallen into Kharun’s hands.

Posted by James Mishler at 1:33 AM