Okay, so yet again, once more unto the breach!


This Saturday, the group will make up brand-spanking new characters for the new campaign. The new campaign is simply titled "900 AC," which stands for the time frame... 900 years "After the Change." This is the "Magic Returns" change, as inspired by such novels as Ariel: A Book of the Change by Steven Boyett and Dies the Fire by S.M. Stirling, and of course by the RPG Shadowrun. Unlike Shadowrun and like the other stories, in this world when the Change hit, Magic returned and Technology died. So anything technologically speaking other than what might be expected to be found in a standard pseudo-Renaissance D&D world is not possible. No guns, no electricity, not even steam power... its all muscle or simple wind or water power or magic.

As it takes place 900 years after the change, there are other influences, too, notably the Horseclans series by Robert Adams. The prior age of technology is regarded with the same myth and legend as we today might regard the Age of Arthur Pendragon.


1) The Change struck on the Mayan Calendar Day of Doom in 2012, ushering in the Sixth Age. It was violently ushered in thanks to World War III; however, when the bombs fell, rather than exploding in nuclear hellfire, they exploded magically. Technology failed, and magic returned, spectacularly.

3) Monsters originated out of the Pits. The Pits are the great craters left over from the bombs; they are centers of chaotic magic, and the areas around them are very dangerous, due to the strange magic and the monsters. Essentially, many ruined Ancient cities are vast dungeons in the strange "Underworld Dungeon" way. Many monsters have spread far and wide and settled in far from the Pits in the centuries since the Change.

4) The Old Gods returned (taken in form from the classic 1E AD&D Deities & Demigods book and, for the demi-humans, the expanded lists in Unearthed Arcana). Europe, Africa, and Asia all pretty easily settled into their Old Ways, with no little trouble along the borders. In the New World, however, things were quite chaotic, especially in the USA. There is a generic "Temple of Angels and Saints," which is led by a council of Seven Archangels; similarly, the classic Lords of the Nine Hells are also present. No sign of the Big Guy or Satan, however... nor of Eru, the Valar, and the Maiar.

5) There was a Dark Age of about 200 to 300 years; in some places the Dark Age still rules. In others, great empires rose and, in the time since, have fallen. The general divisions of cultures and kingdoms in the former USA is loosely based on this map: 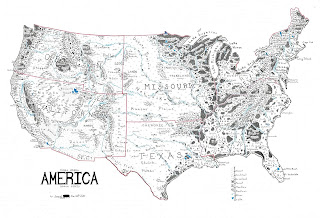 [This map is not mine; click here for more information on this map]


6) The campaign itself begins in the former Celestial Empire of Greater California, specifically, the Ten Towns Alliance of Berklee. The Ten Towns Alliance is a cosmopolitan region, a great melting pot of cultures, races, and religions. Across Frisko Bay are the ruins of The City, Old Shan Fan. The City was not ruined in the Change; the missile meant for it hit to the south, in Sanjo. Rather, The City was the center of the Celestial Empire, which ruled California and beyond for centuries. When the empire collapsed in civil war, the Last Emperor tried to perform a Great and Terrible Spell to punish the rebels; instead he destroyed himself and the City by opening a new Pit.

The regional map for the campaign is based on this map: 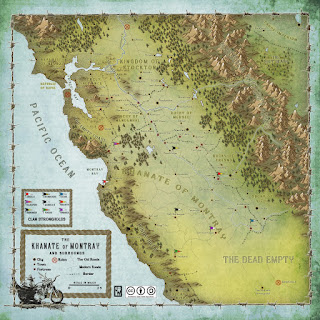 [The map again is not mine; click here for more information on the creation of this map]

The Empty Coast is home to monsters and centuries of lost treasures of the fallen Celestial Empire, as well as to the Dark Pit of the Black Pagoda and the Hell Pit of Sanjo.


The "Bercly Alliance" is the Ten Towns Alliance. The rangers of the Ten Towns? The Oakland Raiders, of course... The Duke of Mendenhal is a half-elf, as are many of his people. They work closely with the Raiders to check the forces of the Roadpigs and the Mongols, who enjoy raiding into the northern territories. They also watch the borders of the Empty Coast, from whence monsters of all sorts might make their way into the wholesome lands.

The Republic of Sanrosa and the Republic of Reyez are elven realms; Sanrosa is closed to other races, while Reyez is open to trade.

The Kingdom of Stockton and the duchies of Mersed, Fresno, and Vizlia are ruled by the Californio Anglos. The Celestial Empire ruled a multiracial/multicultural empire, and as the Fusangese (Neo-Chinese) who ruled the empire had no desire to mix with the ruled peoples (ruling essentially through a millet system), the population of much of the Sanwaukeen Valley remained Anglo, as did the local rulers. Stockton once ruled the whole of the valley from Sacrament south, but 20 years ago the Hells Angels invaded from the City of Lost Angels. The flower of Stockton chivalry (and Stockton unity) was destroyed at the Battle of Beerbridge, but the line has held between the two realms since. Stockton and the Duchies are humanocentric; they are friendly with halflings, tolerate gnomes and dwarves, distrust elves, and loathe orcs and goblins. The men worship at the Temple of Marduk; their womenfolk at the Temple of Ishtar.

The Khanate of Montray is ruled by the Hells Angels. This nomad nation is descended from the military arm of the Celestial Empire; the city of Lost Angeles was the fief of the Angel Khan and became the center of his kingdom when the empire fell. 50 years ago there was a coup, and the Khan and his temple the Temple of Lei Kung, were overthrown by a distant cousin and his sponsoring temple, the Temple of the Nine Hells. Thus began a decades-long war against the neighboring domains, finally culminating in the invasion of Stockton and the Battle of Beerbridge, where the Great Khan and his core followers were slain. His empire collapsed, and today the Khanate of Montray is one of more than a dozen petty domains that have sprung up from the ruins since. As the Celestial Empire used orc mamelukes in its armies, the ruling and warrior classes of the Khanates are a thorough mix of humans, half-orcs, orcs, and goblins.

The coastal mountains being home to many flocks of griffons, the valley is home to no few knights and nomads mounted on griffons, hippogriffs, and demigryphs. The Sierra Mountains are home to dragons, mostly red and white, while the forested foothills are home to green dragons. Blue dragons sometimes make forays over the mountains from the Nevada Wastes, while the Great Fen, Sanjo Swamps, and the Salt Death are home to black dragons. The savage Aztlan warriors of the eastern slopes of the Sierras ride dragonnels, while their barbarian Californio neighbors of the western valleys ride giant eagles.


A generation after the disaster at Beerbridge, the Kingdom of Stockton and the Khanate of Montray are both girding their weapons and readying for war. There are strange things pouring out of the Demon Pit of Sacrament, and unusual activity in the Empty Coast. The elven seers of Sanrosa have exchanged secret missives with their counterparts in Mendenhal. Strange ships have been sighted on the coast. And the last three seasons have been very poor for the mountain folk... trouble is a-brewing...
Posted by James Mishler at 11:12 PM