[Magic Card a Go Go] Order of the Sacred Torch 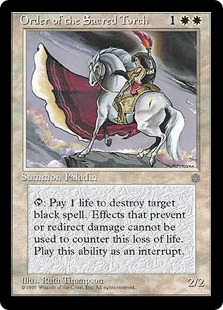 The Order of the Sacred Torch is an order of knighthood dedicated to the eradication of Black Magic. Its paladins are especially efficacious at dispelling any sort of enchantment, curse, spell, or effect brought into being through the Black Arts. The Order was founded centuries ago, predicated on the legend of the Sacred Torch. The Sacred Torch, also known as the First Brand, is said to be the very first flame gifted to men by the gods. This brand was passed from shaman to shaman, tribe to tribe, passing on the Secret of Fire and the Spark of Civilization in the Elder Age. The Sacred Torch is said to burn still at the heart of the Tower of Flame Imperishable, though only the paladins of the order are allowed in the Holy of Holies to gaze upon its flames. Those who contemplate upon it for hours at a time are said to be granted visions in its flames, visions of wrongs to be righted and hidden evils to be fought.

Paladins of the Order of the Sacred Torch possess the ability to dispel magic rather than turn undead. They can only use the ability to dispel a spell created by an evil caster or creature; any other attempt to use the ability automatically fails. The paladin uses his Charisma rather than Intelligence to determine if the ability was successful. Each use affects only one single spell or effect. If the use of the ability is unsuccessful, the paladin cannot use the ability on a spell cast by that same spell caster for a whole day. The paladin can also attempt to use this ability to counter spell a spell as it is being cast. He may only do so once per round; if he has already acted in the round, the attempt suffers a +3 to the CL. When used to counter a spell as it is being cast, the paladin suffers 1d6 points of damage per level of the spell being countered, whether or not the spell counter attempt was successful.

Magic Card a Go Go: Every day, or thereabouts, I'll look up a random Magic: The Gathering card or three on Gatherer and devise a background and some rules. Why? Mostly because it seems like fun. When it is no longer fun, then meh...
Posted by James Mishler at 12:55 AM