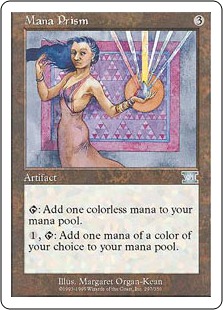 Mana Prisms are simple magical devices designed with two goals. The first is to generate magical energy, the second, to provide a spell matrix; the two enchantments complement each other, the generation of magical energy requiring the implantation of the spell matrix, and the use of the spell matrix requiring the provision of magical energy. These devices take many forms, though all have a large crystal or gem as the actual spell and energy matrix. The most common form is that of a simple crystal pyramid, though the gem can be of any shape and size. Some of these are implanted in fancy gauntlets, bracers, necklaces, brooches, or even goblets, and to the untrained eye appear to be little more than a fine begemmed piece of jewelry. The item must be worn or held to be used.

Each mana prism contains the matrix for casting a single spell; in this regard it is much like a scroll, however, when used, the spell matrix does not disappear. The prism also contains enough energy for a single casting of the spell contained therein. Use of the spell requires the use of the magic word or phrase that activates the prism. When used, this energy regenerates over a period of 24 hours. Thus, a mana prism can provide the user with a single spell, once per day. Note that these items are useable by anyone, not just wizards, though only wizards can use the additional powers of the prism.

The prism can also be used to power an existing spell of the same level or lower as that of the spell matrix the prism holds. This uses the prism's ability to power its innate spell; the user casts the spell he has memorized, but does not lose that spell, instead using the power from the mana prism to power the casting of the spell. For example, the energy held by a mana prism with a 3rd-level fireball spell matrix can be used to power a 1st-level sleep spell, provided the caster has sleep memorized. The casting of the sleep spell does not cause the caster to forget the spell, but it does drain the mana prism of its power for the day.

Similarly, if the caster has a spell of the same level or higher than that in the matrix memorized, he can use the energy provided by that spell to cast the spell in the matrix, even if the mana prism is out of energy. For example, a wizard with the 5th-level cloudkill spell can use the energy of that spell to power the 3rd-level lightning bolt spell matrix held in a mana prism. The cloudkill spell is effectively cast into the prism, the energy converted into the lightning bolt.

Most mana prisms contain only one spell matrix, though a very few rare ones are known to contain more, with enough energy storage capacity to power each spell once per day.