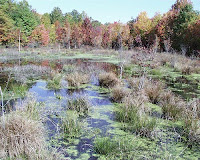 #6: THE GREAT FEN. The Great Fen is actually not a fen at all, but instead a mixture of swamp and marshlands created by the confluence of the Sacrament and Sanwakeen rivers. In the Fifth Age, the great delta had been tamed and divided into islands used for farming. Most of the dams and levees collapsed during the Dark Age, flooding the delta once again and transforming it into the modern mix of swamp and marsh. This process was exacerbated and the fenlands expanded after a great quake during the Dark Age changed many of the channels and greatly transformed the near-delta river courses. The relatively small amount of water management performed by the Stockton Temple of Marduk for their farming needs in the centuries since has hardly had any effect at all on the fen. 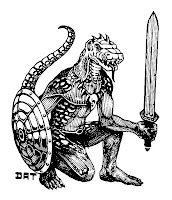 At some early point in the Dark Age, a race of Lizardmen, likely from the Sacrament Hell Pit, settled in the fenlands. During the Golden Age of Fusang they were recognized as an official, legal race, rather than as monsters, and the core of the Fen was delineated as their own Imperial Reserve, much as the Dwarves, Elves, and Hobbits received their own reservations. The treaty with the Lizardfolk ensured uninterrupted travel for ships between and … provided they remained along the delineated course via the major rivers. Never much for “civilization,” the Lizardmen of the Fen remained xenophobic and isolationist, with a handful of their more cultured brethren handling all the political and economic relations with the Empire from the small port town of Grizlee Bay, in the westernmost part of the Fen known as the Suhsoon Marsh. 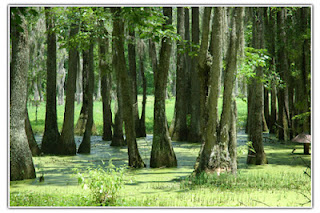 The town is built upon the waters of the bay, using the rusting hulks of Ancient warships as artificial islands. As the Lizardfolk faith requires that no non-Lizardfolk step upon their sacred land, use of this strange location was deemed acceptable. The six small islands were expanded with soil and stone brought in from Imperial lands elsewhere, and today remains the only true town of the Lizardfolk. Since the fall of the Empire, however, the town of in the Oaklan Alliance has become a “home away from home” for a small population of Lizardmen who seek a more civilized lifestyle.

In the time since the fall of the Empire, the Fens have generally remained inviolate, as there is little to gain by taking the marsh and swamp lands when so much more fertile land remains fallow due to war. Still, there are no few skirmishes with the Lizardfolk along the verge of the Fen, as locals seek to hunt and gather from the fairly rich wetlands near their homes. For their part, the Lizardmen generally remain in their fenland, with only the few mad cultists sneaking into the dry lands to steal a two-leg furred-one now and again for their infernal rituals.

Posted by James Mishler at 1:03 PM