[Sixth Age] Free City of Sanrafayl, Home of the Corsairs 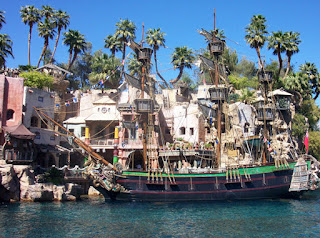 #7: FREE CITY OF . The “Free City” actually consists of a number of small settlements on the north-western shore of and into the lower vales of the Tamahleepahs Hills: Sanrafayl, , Hross, Greenbray, Larkspur, Milvale, , and Tiburon, with all but the “Free City” itself being modest villages or hamlets. The Free City was originally part of the Elven Reserve of Sanrosa, a special domain formed by the Empire as a home for the Elves who wished to live separately from Humans and other races. As Sanrosa and most of the surrounds were held by the Elves anyway, it was already a fait accompli, with the Empire merely recognizing a simple reality that would be difficult to change. However, when the Empire formed the Reserve, the had already long been home to mixed families of Humans and Half-Elves; the Elves, being their relatives, graciously allowed them to remain. Sanrafayl itself was one of the few “open towns” of the Reserve, where non-Elves could come to trade and meet with the Elves, so its already very Human side eventually grew such that few Elves, and not even many Half-Elves, lived there. As the Elves also ruled the town with a light hand, not caring much what the foreigners did to each other as long as they respected the Elves and their local allies, the port town came to gain an unsavory reputation as a meeting place for pirates, smugglers, thieves, and others who wanted to do business out from under the eyes of the Imperial Police. 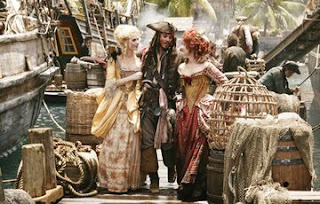 Thus, when one of the factions of the Last Civil War sought to use the peoples of Sanrafayl to their advantage, they offered them some interesting terms: letters of marque and reprisal, transforming the local scruffy bunch of buccaneers and pirates into “legal” privateers. While the faction that offered them the letters was destroyed along with the rest of the Imperial court, the residents of Sanrafayl held onto their new-found “respectability,” and to this day there remains an “Imperial Legate” in the town who grants these letters to the official “Corsairs” of the town; fees required for the letters go to the city of course, as do the fees imposed on various and sundry cities and towns for recognition by Sanrafayl of their vessels as holding the protection of the “Official Imperial Registry of Ships.” Ten Towns, the Duchy of Bispo, and the Imperial Chartered Merchants Guild of Mazatlan are the only three states that are known have paid this fee regularly, and thus pretty much any and all other shipping is open to the “privateers.” The Grey Havens and the various vessels of Sanrosa and Reyez are held sacrosanct; they are not necessarily allies, but the corsairs do come to the aid of the Elves if they have troubles. The ships of are a favored prey, usually left to sail on their way after a payment of a tax based on the goods carried; it’s a goose that lays a silver egg usually, but the privateers are not foolish enough to kill it. The Outlaw Orc ships of Montray, the Viking ships of Sohlvang, the devil ships of Lost Angels, and the slaving vessels of Aztlán and Crescent City are shown no mercy;  their men are slaughtered and the ships taken as prizes, if possible. Between official city ships and the ships of the chartered corsairs Sanrafayl has twice as many ships as any other seafaring power north of . 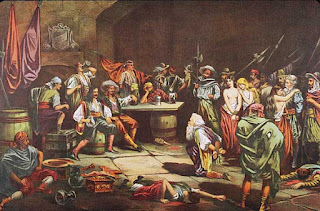 Politically, Sanrafayl is sovereign from the ; when Reyez broke away from Sanrosa, Sanrafayl broke away from Reyez. is a large town, with all the amenities expected for a piratical form of life; thus it is mostly made up of taverns, casinos, flop houses, and brothels. Just about anything can be found in the port except for slaves; it is said that the Elves required that slavery be forbidden as the cost of the sovereignty of the city. Most ships are built in the hamlet ports, especially Tiburon and , from the fine wood traded by the Elves. is held by the corsairs as a redoubt; it is said that there are tunnels and vast caverns within the island that are home to allied submarine creatures, including a dragon turtle. The chartered Corsairs fly red sails with the white Sea Dawg badge; official city ships fly checked blue and gold sails with an alternating Trojan head. 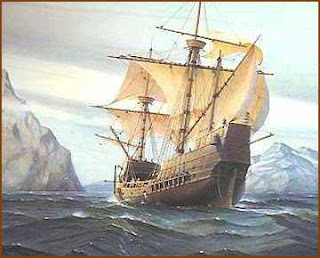 The city is ruled by the Council of Captains; these are all retired corsairs who own property in the city and still own at least one ship. The Council of Corsairs, that is, ship captains who have letters of marque, acts as an advisory board. The Council of Captains appoints a mayor (rarely a former captain himself, usually a respected businessman) to run the town on a day-to-day basis. In times of war, they elect one of their own or one of the corsairs as Admiral, effectively a general-and-dictator for the duration of the war. Naturally, the bulk of the pay of the civil servants of Sanrafayl is through bribes, which are perfectly legal and expected.
Posted by James Mishler at 1:06 AM