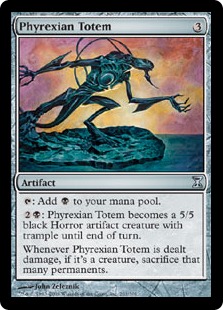 A Phyrexian Totem is a small statuette or icon depicting an insect-like demonic figure. It stands 6" tall, and oddly has a negligible weight, though it feels more solid than iron. It is of a glistening black color, like obsidian, and shadows seem to dance and play upon and within it. The figure, when seen through the corner of one's eye, seems to move ever so slightly; it grins, it winks, it waggles a tail, all minor movements that, when looked at directly, were apparently merely figments of the imagination, as the figure moved not at all.

When the totem is touched, it speaks to the mind of the one who touches it, whispering of the great power it can grant to him in return for just a little bit of the holder's essence... a promise that is true, after a fashion.

If willingly given the life energy of the holder, the Totem drains three points permanently from three random Attributes (this sacrifice can end up being all the same Attribute). Restoration and similar magic will not restore the lost Attribute points. The Totem and its "master" are thereafter tied together inextricably until death (though a wish spell might sever the connection).

The master senses whatever the Totem senses, from whatever distance (though full concentration is required for full understanding of what it sees, hears, smells, tastes, and touches). The Totem can speak to its master telepathically at any distance; its mentality and personality is that of an evil, impish, unpleasantly vicious hellcat.

The Totem is usually in a default "spy mode" state, capable of movement (30 ft.) and basic actions in its tiny form. In its tiny spy form it cannot attack, it can only move and spy and steal tiny objects. It is indestructible in this form, immune to all forms of magic and weapons. It can Hide, Listen, Move Silently, and Pick Pockets as though it were a 10th level Thief. It has 120 ft. darkvision. It can spider climb as per the spell at will. It can be grabbed (AC 25) and can offer no resistance if held firmly, though it will snarl and whine and whimper... and mentally call to its master for aid!

The master, if a spellcaster, may withdraw energy from the Totem, whatever the distance of the Totam from the master, to immediately cast a spell which the master has memorized without losing the spell from memory (though the energy thus gained cannot be used to cast any form of healing or curative spell). The energy thus gained is no greater in level than the highest level spell the master may cast; he may choose a lower level spell if he wishes. When energy is used thusly, the Totem becomes inert for 1d8 hours per level of the spell cast.

The master, whatever the class, can also temporarily sacrifice three Atrribute points (randomly as above) to the Totem in order to transform it to "warrior mode" (these Attribute points heal as normal). The Totem then grows in one round from 6" tall to 9' tall, and gains prodigious combat abilities... at the cost of the Totem and it master becoming susceptible to mortal attacks!

The Phyrexian Totem in "warrior mode" is a simple killing machine. When in this mode, the Totem has the same hit points as its master... literally, its master's hit points are its own, and wheneve the Totem takes damage, its master... wherever she is... actually takes the damage! When in this form, the master's soul enters the Totem, her own body falling to the ground in a state of suspended animation (and totally helpless, it should be noted).

The Totem cannot exit the "warrior mode," and thus the master cannot return to her own body, until after it has slain at least one intelligent being. The master can return to her own body at any time thereafter; the master can make a Charisma saving throw to do so instantly as the Totem is taking a hit that would knock it to 0 or fewer hit points. If the saving throw fails, the Totem is destroyed and the master's soul is condemned to some unknown hellish plane in a distant dimension. If the saving throw succeeds, the Totem is still destroyed, but the master's soul returns to its body. In this case, however, the Attribute points sacrificed to the Totem to tranform it are lost forever.

If the master's body is slain while her soul is in the Totem, she remains trapped everafter in the Totem!

The Totem can use whatever spells and abilities the master possesses, for in effect, the Totem is the master. Note that any requirement for material components and foci must be met, and that the Totem cannot cast any sort of curative or healing spells, even on itself (it can use healing potions, though)! The Totem can wield any weapons, though it cannot use any sort of armor.

The master does not gain any experience points for any actions taken while inhabiting the Totem.

Immunities: The Totem is immune to all forms of normal and magical cold, fire, and poison.

Resistances: The Totem suffers only half damage from all forms of normal and magical acid, electricity, and sonic attacks.

Spell Resistance: The Totem has a spell resistance equal to the level of the master.

Campaign Notes: These items are very rarely discovered, usually near Hell Pits or in strange temples dedicated to obscure gods of Evil. No one in their right mind would use such a thing, and no one in their wrong mind would ever sell such an item. However, those who are of Evil sort that resist the siren call of the Totem's power might sell the item as a curio or objet d'art to wealthy, decadent types or madmen...
Posted by James Mishler at 3:11 AM