#5: OF : In the Dark Age that followed the Change, the primary factor in the development of society in was the conflict between the Anglo tribes and the Aztlán tribes. When the Change struck among the first of the Old Gods to return were the old Aztec gods. While their message fell mostly on deaf ears in itself, in the lands to the north, where many of the descendents of their peoples still lived and were oppressed, they found more willing followers. In the followers of Tezcatlipoca, allied with the followers of Huitzilopochtli and Tlaloc, founded the Aztlán Empire in (30, below), which was renamed the City of . There is no Hell Pit in , as like (23, below) it suffered an airburst, and thus the city was cursed, rather than fully transformed. The Curse of San Diego gave the priests of these evil deities great power; first they consolidated their power over the region by sacrificing any non-believers, Mexican or otherwise, and then about 50 years after the Change they began a genocidal revanchist reign of terror against the “Anglos” to the north. These Anglos, at first a disunited bunch of independent towns and tribes, slowly unified their defenses and fell under the power of the . The war lasted for more than a hundred years, as the front moved slowly. Aztlán cults popped up amidst the Anglo peasantry, serfs, and slaves with “surprising regularity” (not surprising considering that most of the Hispanic peoples of Northern California had been reduced to serfdom or even slavery by their Anglo masters). 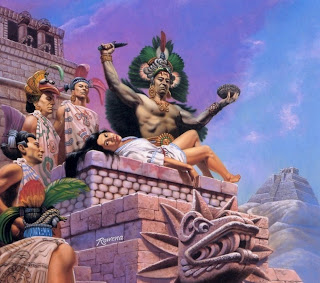 The Pyrrhic War, as it is known to Anglo history, ended with the destruction of Aztlán and the scattering of the Aztlán peoples to the four winds. It was a pyrrhic war indeed, as the final spasms of the war virtually depopulated southern California and reduced Stockton to a beggar’s kingdom. Outlaw gangs (the ancestors of the modern Outlaw Orc Tribes) ruled the ruined lands between the walled towns and castles. Into the vacuum walked the Fusangese of Shan Fan; they bought out the Outlaw Gangs and slowly built their empire, first through trade, then through treaty, and eventually, through use of the warrior legions that had developed from the old Outlaw Gangs. For 600 years the Fusangese ruled Stockton, though their form of rule was regarded as “light-handed,” as they remained apart from the ruled in their own enclaves and did not mingle with their subjects. Each ruled domain remained in the hands of a local king, “advised” by an Imperial Governor. The arrogance of the kings of Stockton ensured that their kingdom was slowly dismantled over the centuries, parts being separated off to form their own independent Imperial Grand Duchies; first Bakersfiel, then Montray, then Reyez and Mendenhal, and finally Oaklan. Each was granted its independence from Stockton as a reminder of who was boss after the king and his people had supported various enemy factions during Imperial Civil Wars. Stockton still, of course, supported yet another faction in the Sixth and Final Imperial Civil War (800 to 820 AC); this last ended the empire with the destruction of Shan Fan in the creation of the Dark Pit of the Black Pagoda. 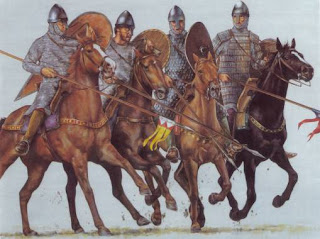 finally had its freedom, but it was to discover, at a great cost. For once it gained its independence from the shattered empire it had its own problems, as the Grand Duchy of Bakersfiel invaded the Duchy of Vizaylia based on ancient claims. And so it went war after war… in turn invading Mendenhal, then being invaded by the Sierra Mountain Tribes, then invading Ta-Ho in retaliation for their support of the tribes… and so forth. While the noble warrior-lords of , egged on by their clergy, the priests of Marduk (8, below), ever sought mastery of the , other factions turned and plotted.

In 850 AC in , the Great Khan, Bili-Bahb Djohnz, was overthrown by one of his lieutenants, Khan Djimi-Djoh Klaytuhn. Khan Djimi-Djoh had the assistance of the of the Nine Hells, and with their ascension to power the priests of Gruumsh were cast out (the unlucky few who did not flee being sacrificed on the Devil worshipper’s altars). The warriors of the Outlaw Tribes were galvanized by this development, and the long-slumbering beast that had been the Imperial Legions were whipped into shape. Consolidation of the southern regions took more than 20 years, but finally the Great Khan turned his covetous eyes upon the rich . 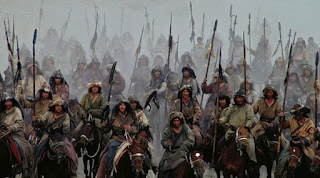 He destroyed the Grand Duchy of Bakersfiel first, then turned the massed legions on Montray. The king of simply took advantage of the situation to retake lands lost to these enemies, thinking the Great Khan and the daggers of his priests would be satisfied with the southern duchies. He was wrong. In 880 the Great Khan and his vast throng moved north, straight into the heart of , nibbling at Mendenhal as they went. Together the forces of Stockton, Mendenhal, and the Ten Towns met the great horde at the Battle of Beerbridge. The three-day running battle ended with the destruction of all warring forces. The leaders of three realms, and their leading advisors and adjunct rulers, were slain; the flower of Stockton and Mendenhal chivalry lay dead in the fields. The Patriarch of Marduk and his bishops died in mystic battle toe to toe with the Evil High Priest of the Temple of Nine Hells and his shamans. Of the members of the Wizards Guild of Berklee who went to fight, less than one in five survived to tell the tale. Of the Oaklan Raiders, the Haywar Bounders, and the other volunteer forces, only a handful survived to return home. 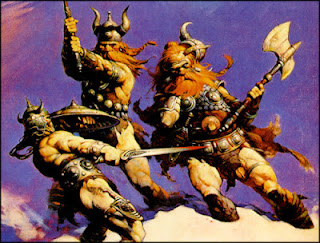 The divisions in the kingdom already at the straining point, suffered yet another blow in the Un-Fought War, when the three dukes left to the king (or at least, in two cases, their regents) declared themselves independent. With almost no forces left, and Queen Regent Amandah ruling in the name of her puling babe-in-arms, Prince Djef, the de facto independence of the duchies was recognized, though never legally. Today, 20 years after Beerbridge, young King Djef seeks first to re-conquer the “recalcitrant dukes,” then, after consolidating his gains, take on the Khan of Montray and retake those lost lands. Unfortunately, the last several years have had poor harvests, both in the Valley and in the Sierras, the Valley harvest decline exacerbated by the poor maintenance of the canals of the Sanwakeen (there is little or no maintenance upriver, in the lands held by Bakersfiel and Montray, and little enough in the duchies and Stockton itself, as the Temple of Marduk has undergone schisms reflecting the divisions in the secular realm). His people poor and hungry, they now quake in fear, for there are rumors of movements among the Sierra Mountain Tribes, and the few living grandfathers who saw battle against the giants in decades passed have long told the tales of horror they faced in battle against the Snow Men.
Posted by James Mishler at 1:04 AM