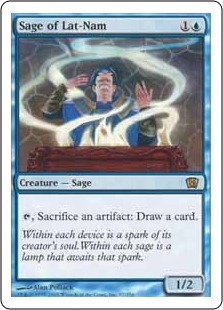 The Sages of Lat-Nam are a mystical order of wizards who delve into the mysteries of the arcane with what others regard as a brazen disregard for safety or sensibility. They are known as "sages" only in an ironic fashion, for they do not truly study knowledge as other sages do. Instead, they tear it from the heart of existing magic items. To those who create such things, they are the very essence of barbarism, knowledge of arcane magic or not.

A Sage of Lat-Nam can "de-construct" a magic item in order to learn one aspect of the magic that created it. Doing so is a simple process requiring a laboratory and a single eight-hour day of labor; at the end of the day, the item in question is reduced to mere bits and bobs, with no remaining magic, and the spare parts useless and utterly without value (gems are shattered, gold is spoilt magically, etc.) At the end of the destruction of the item, the sage makes an Intelligence check; instead of his level as a bonus, he uses the highest-level spell level he can cast.

If he fails to meet his target number, he has failed, and learned nothing at the cost of the destruction of a magic item.

If he at least equals the target number, however, the surplus of the difference between the roll and the TN is the highest-level magical "secret" he can rip from the experience. He may only learn one new spell, however, regardless of how many spells he might potentially learn. And of course, if the highest-level "secret" is still too high for his roll, then he fails to learn anything at all. If there are multiple spells to be learned, then the CK determines which one is learned randomly.

The sage must thereafter scribe the learned spell in his spell book as normal, requiring the usual amount of time and expenditure of inks and materials as would normally be required.

Other wizards use the name "Lat-Nam" as a curse, comparing the wizard of old who developed the pyrrhic rituals and formulae to the most savage of barbarians of yore...

Magic Card a Go Go: Every day, or thereabouts, I'll look up a random Magic: The Gathering card or three on Gatherer and devise a background and some rules. Why? Mostly because it seems like fun. When it is no longer fun, then meh...
Posted by James Mishler at 5:17 PM